Given the persistent strength in state tax collections, it may come as a surprise that California’s General Fund likely faces a budget problem in the coming years. Yet this is the key takeaway from a recent fiscal analysis of 10,000 possible revenue scenarios conducted by our office. In 95 percent of our simulations, the state encountered a budget problem by 2025-26. Notably, the likelihood of a budget problem largely is impervious to the future trajectory of state tax revenues. That is, whether revenues trend upward or downward from here, the state likely faces budget deficits. The central implication of our findings is stark and suggests that in the interest of fiscal resilience, the Legislature should consider rejecting a substantial portion of the Governor’s January spending proposals.

How Can Strong Revenue Trends Present a Budget Risk?

In the brief associated with our analysis, we described how continued revenue growth could increase the state’s constitutional funding obligations enough to cause large recurring budget deficits. Having essentially reached the Proposition 4 (1979) state appropriations limit (SAL), each additional dollar of revenue must be allocated consistent with SAL requirements, generally making them unavailable to fund baseline expenditures. Additionally, the state also must continue to spend required amounts on schools and community colleges and reserve and debt payments, pursuant to Propositions 98 (1988) and 2 (2014), respectively. Together, we estimate that for every dollar of tax revenue above the SAL, the state faces approximately $1.60 in constitutional funding obligations. Based on our scenario analyses, if revenues exceed median expected growth, SAL requirements very plausibly could reach $20 billion to $45 billion by 2025-26. Counterintuitively, therefore, each additional dollar of revenue above the limit worsens the state’s budget outlook.

Given This Conundrum, How Should the Legislature Consider Responding?

In our brief, we identified several short- and long-term options, with particular focus on the atypical budget risk stemming from upside revenue performance. In the near term, the most jarring of the options is probably the one most conducive to preserving state fiscal resilience. We recommended that the Legislature consider rejecting the lion’s share of the Governor’s $10 billion in non-SAL-excludable budget proposals. Further, we note that rejecting the proposed spending alone—even in favor of SAL-excludable outlays—likely would be insufficient since constitutional obligations would accumulate faster than incoming revenue in future years. In addition, therefore, we suggest that the Legislature hold the unspent funds in reserve to help pay for the state’s anticipated SAL-related obligations. Longer term, state policymakers still likely will need to weigh fundamental questions about the size of state government and whether to seek a voter-approved amendment to Proposition 4.

What About Downside Risk?

While less peculiar, there also are risks to the budget from downside economic and revenue performance that increasingly warrant recognition in the state’s fiscal planning efforts. Throughout the past year, inflation has accelerated faster than the consensus forecast anticipated. Now at 40-year highs, the Federal Reserve (the Fed) has embarked on a cycle of tightening monetary policy intended to cool inflation. Put more plainly, the Fed is attempting to reduce inflation by orchestrating an intentional slowdown in economic growth. Ideally, the slowdown would bring down inflation without a substantial increase in unemployment or causing a recession. History suggests that this is a daunting task, however, and at least raises the odds of a recession. Financial markets, and the yield curve for U.S. Treasury notes in particular, recently have signaled as much. In normal economic times, there is a positive spread between the yields on ten-year and two-year notes. When this gap shrinks or inverts, however, it suggests bond investors anticipate that in the future, the Fed will be holding interest rates low due to a weaker economy. As a result, increased yields on short-term Treasury notes, reflecting the Fed’s efforts to head off inflation, can approach or exceed the yield on longer-term notes. As displayed in Figure 1, this spread briefly fell into negative territory in early April 2022, from 1.29 percentage points on October 8, 2021. While a temporary yield curve inversion alone is hardly a comprehensive basis on which to make state fiscal policy, its occurrence is cautionary. 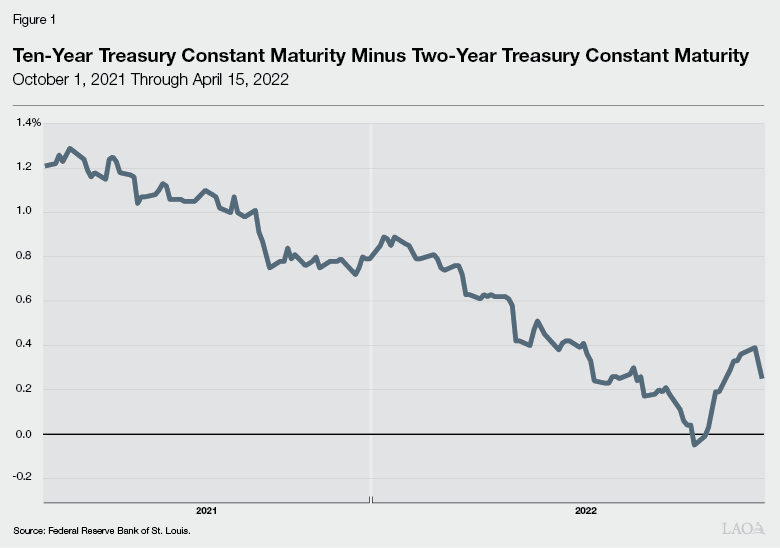 Although the probability of a recession has increased, that does not necessarily mean one is right around the corner. It is plausible that the economy could continue to produce strong revenue collections in 2022-23, but then fall into a recession shortly thereafter. This gives rise to a potential one-two fiscal punch where the state generates large SAL-related obligations (upside risk) in 2022-23 followed by a revenue downturn in subsequent years (downside risk). In addition to 2022-23 SAL requirements of somewhere in the range of $10 billion to $20 billion, a recession of average severity thereafter could result in annual deficits of $10 billion to $12 billion. If these dynamics were to occur simultaneously, or if the Legislature defers addressing the 2022-23 SAL requirement until 2023-24, the state’s reserves would be depleted within one year. The risk presented by this possible sequence of events, which we have described as a worst-case scenario, calls for resilience-enhancing actions now. A good place to start would be applying close scrutiny to the Governor’s spending proposals.

Overall, the Governor’s budget plan is not a fiscally sustainable starting point considering that the Department of Finance estimates that ending balances in the state’s discretionary reserve would turn negative from 2023-24 through 2025-26. While this partly reflects the inclusion of large one-time spending proposals that could be altered, it does not account for future SAL requirements. Our main recommendation—to reject $10 billion of the Governor’s non-SAL-excludable spending proposals and instead save the funds—would help the state’s fiscal outlook in two ways. First, rejecting the spending would constrain growth of the state’s spending base, putting it on more solid fiscal footing for whatever economic conditions the future holds. Second, by saving the unspent funds, the state would have resources on hand to help fund the expected SAL requirements or, alternatively, cover a recession-driven budget problem. This action also could be paired with other steps to mitigate the constraints of the SAL, which we lay out in our brief.

Recognizing that despite the risks we have identified, the Legislature nevertheless may wish to proceed with some budget augmentations, we suggest it consider three criteria. First, we recommend a high threshold for new proposals. This means the proposal should address a well-defined problem with a policy strategy that has been evaluated and found to be cost-effective. Second, we suggest giving priority to proposals that mitigate future budget problems. Examples include proposals that, in the future, result in lower appropriations subject to the limit because they are excluded from the SAL, reduce tax revenues, or result in state savings. Similarly, the Legislature may want to focus on one-time versus ongoing spending commitments. Finally, we recommend prioritizing proposals that may have other fiscal benefits, such as by drawing down additional federal funds.

Throughout the post-Great Recession era, state policymakers steadily increased fiscal resilience by prudently accumulating large budget reserves. Are the state’s existing reserves enough to cover the budget problems we estimate are likely within the time frame of its forecast horizon? No one knows for sure, but in some scenarios, we found the cumulative estimated budget problem would substantially exceed the state’s current combined general-purpose budget reserves of around $25 billion. Fortunately, though, these estimates arrive at a moment when tax collections are robust, providing policymakers with the opportunity to take protective action. In light of the constraints presented by the SAL, creating additional budget resilience would help shield the Legislature’s policy priorities in future years.