Summary. In response to increasing prices across the economy—particularly fuel prices—the Legislature is considering a number of policies for providing fiscal relief to Californians. This post identifies key questions for the Legislature to consider when analyzing the merits of the options proposed by the Governor and designing its own relief package. Overall, we suggest the Legislature design a package that (1) targets relief to the groups it wants to prioritize, (2) can be implemented quickly and efficiently, (3) aligns with its other policy and budget priorities, and (4) helps the state meet its state appropriations limit (SAL) requirements.

Prices for many types of goods across California have increased faster than usual over the past year. Figure 1 illustrates these trends, displaying the percentage increase in prices for items in the Los Angeles metro area from January 2017 through March 2022. While prices in general have increased, the price of motor fuels and electricity have grown even more significantly when compared to other items, as highlighted in the figure. For instance, statewide average per‑gallon gasoline prices rose from $3.91 in April 2021 to $5.65 in March 2022, a 45 percent increase. 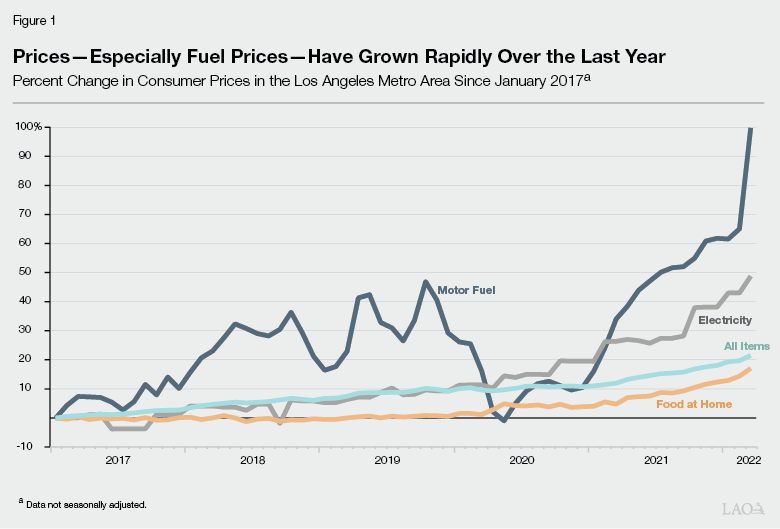 In response to these trends, both the Governor and members of the Legislature have expressed interest in providing relief to Californians experiencing financial hardships, particularly from high fuel costs. Based on its priorities, the Legislature has several options for pursuing this objective. This post identifies key questions for the Legislature to consider when analyzing the merits of the Governor’s proposals and designing its own relief package.

Governor Proposes Package of Fiscal Relief Proposals. The Governor has put forward several proposals totaling roughly $11 billion that are intended to provide relief to Californians, most of which were proposed this spring following the release of the Governor’s January budget. The specific proposals include:

Majority of the Funding Would Be Excluded From SAL. Under the California Constitution, the SAL limits how the state can spend revenues that exceed a specific threshold. Recently, the SAL has emerged as a constraint that impacts the ways in which the state can allocate surplus General Fund revenues. The state can meet SAL requirements through a variety of actions, such as lowering revenues from certain taxes, spending more on excludable purposes (for example, tax refunds, capital outlay, and subventions to local governments), and/or providing tax rebates and additional payments to schools. The Governor’s $9 billion tax rebate proposal would help the state meet its constitutional SAL requirements because rebates are considered excluded spending. While we will know more about the state’s SAL requirements in the coming weeks, they are likely to be in the tens of billions of dollars. (For more information about the SAL, see our report The State Appropriations Limit.)

The Legislature has multiple options it could pursue to provide relief to Californians. Below, we discuss several key questions for the Legislature to consider, including issues regarding aligning policies with legislative priorities, as well as some of the fiscal and policy trade‑offs to consider. We also summarize these considerations in Figure 2.

Which Groups of Californians to Prioritize in Providing Relief? The Legislature will want to clearly define which groups it wants to prioritize in developing a relief package. For example, categories of focus could include (1) those experiencing higher fuel prices, (2) those experiencing the greatest financial hardship, or (3) state residents who are more broadly affected by higher prices. This prioritization involves considering which Californians the Legislature believes are most in need of financial relief—such as those who consume the most fuel, those who own cars, those who ride transit, those who have the least financial resources, or all who live in the state (given higher overall prices).

The Legislature will also want to determine exactly how to define the groups it wants to target for relief, and design its policy actions accordingly. For instance, this could involve determining the income thresholds for households that would (and would not) receive relief.

Which Potential Policies Best Align With the Legislature’s Relief Priorities? Once the Legislature has established which groups it wants to prioritize, it will want to select policies that align with its intended objectives for providing relief. Figure 3 highlights some key potential policy actions the Legislature could consider, depending upon its intended areas of focus. The Legislature’s approach could include approving certain proposals from the Governor (such as providing refunds to vehicle owners), modifying those proposals (such as further reducing existing fuel excise tax rates beyond what the Governor proposed), or adopting alternatives (such as providing targeted relief to households with lower incomes). The Legislature could also choose to develop a package that contains a mixture of proposals in order to provide relief to several different groups. For instance, the Legislature could provide relief to those experiencing higher fuel prices and those experiencing financial hardship by both reducing fuel taxes and distributing tax refunds to lower‑income households.

If one of the Legislature’s priorities is to provide relief to those who are most affected by higher fuel prices, for example, reducing fuel taxes will most directly target this group because it is linked to the amount of fuel consumption. Providing tax refunds to vehicle owners would be less directly linked to fuel consumption, but would provide some related relief given that these individuals likely drive to some degree. Providing rebates to zero‑emission vehicle owners (as included in the Governor’s proposal), however, would not have any link to gas price burden.

In contrast, if the Legislature’s goal is to provide relief to those experiencing the greatest financial hardship, it may want to consider options beyond those linked to fuel taxes and vehicle ownership. For example, non‑vehicle owners—who also are facing high overall costs—represent 7 percent of households in the state and tend to be lower income.

Which Potential Policies Could Be Implemented Quickly and Efficiently? If one of the Legislature’s goals is to provide timely relief to Californians, it also will want to consider which policies can be implemented quickly and efficiently. The speed at which each policy option could be implemented will vary based on factors such as whether it would be implemented through a new or existing program. For instance, tax refunds—both broad and income‑based—could be issued relatively quickly and efficiently given that the state has experience providing such payments through the Golden State Stimulus Program and annual refunds to taxpayers. Similarly, providing income‑based relief by augmenting established state assistance programs—such as California Work Opportunity and Responsibility to Kids (CalWORKs)—would be relatively straightforward.

In comparison, providing tax refunds to vehicle owners would require several additional steps that could delay payments and increase administrative costs. Such steps would include collecting the necessary data from the Department of Motor Vehicles and selecting an entity to distribute payments. Additionally, some policy options may not be able to take effect immediately due to administrative procedures. In particular, fuel tax reductions would need to be enacted 60 to 90 days before they could go into effect.

What Are the Key Fiscal and Policy Trade‑Offs? In prioritizing relief, the Legislature will also need to balance this against its other budget and policy aims. Many relief options come with associated fiscal trade‑offs. For instance, decreasing fuel excise taxes—absent any state funding backfill—would reduce revenues used to support state transportation projects, such as maintaining highways and local streets and roads. The Legislature will therefore need to balance the merits of providing gas tax relief against the associated impacts on transportation infrastructure. Additionally, relief options supported by the General Fund—such as providing tax refunds—come with an inherent opportunity cost. That is, every dollar dedicated to providing fiscal relief limits the amount of General Fund available for other budget priorities. Such priorities might include saving funds in reserve to address potential recession‑driven budget problems that may arise in future years. This year, however, given the constraints of the SAL, the use of surplus General Fund resources is considerably more constrained. (For further information, see our post The 2022‑23 Budget: State Appropriations Limit Implications.)

The Legislature will also want to consider potential policy trade‑offs associated with certain relief options. For instance, the state has adopted ambitious goals related to reducing greenhouse gas (GHG) emissions in the state. Depending on the magnitude of how much it was to lower fuel taxes, such a price reduction could potentially result in more driving and higher fuel consumption, which in turn could lead to relative increases in GHG emissions and other forms of pollution.

How Can the Relief Package Be Designed to Help Meet the State’s SAL Requirements? Given the constraints in this year’s budget, the Legislature will want to design a relief package that focuses on meeting the state’s requirements under the SAL, with at least a roughly equivalent amount of excluded spending as that proposed by the Governor—around $9 billion. For instance, providing tax refunds to registered vehicle owners would be an excludable activity and therefore help the state meet its SAL requirements. In contrast, reducing fuel excise taxes would not because those revenues are already excluded from the SAL. Augmenting funding for other economic assistance programs—like CalWORKS—also would not assist the state in meeting SAL requirements unless authorized as emergency spending (like the Golden State Stimulus payments).

In response to increasing prices across the economy—particularly fuel prices—the Legislature is considering a number of proposals for providing fiscal relief to Californians. Overall, we suggest the Legislature design a relief package that (1) targets relief to the groups it wants to prioritize, (2) can be implemented quickly and efficiently, (3) aligns with its other policy and budget priorities, and (4) helps the state meet its SAL requirements.