May Revision Barely Balanced Before Accounting for State Appropriations Limit (SAL) Requirements. Our multiyear assessment, assuming the Governor’s May Revision policies, indicates the state would have narrow operating surpluses and deficits, but a positive ending fund balance through 2025‑26. This finding indicates the budget is barely balanced. However, SAL requirements would reach $10 billion to $20 billion per year over the multiyear period. The administration does not include a plan to address these requirements, which would far exceed the state’s operating capacity. Consequently, under May Revision policies, the state would likely have significant budget shortfalls in the out‑years.

Adopting LAO Revenues Mitigates Budget Impacts of a Recession. Although predicting the next recession is impossible, economic indicators currently suggest a heightened risk of recession within two years. While reserves—which are significant—are one of the most critical tools to prepare for a recession, other steps are warranted given current conditions. Specifically, adopting our revenue estimates, which explicitly incorporate the current heightened risk of a recession, reduces the chances revenues fail to meet expectations. Coupled with multiyear planning, this approach can prevent the state from expanding programs to unsustainable levels.

Plan for SAL Requirements Now. We recognize that some policymakers have signaled an interest in pursuing changes to the SAL with voters by 2024. In the meantime, we strongly caution the Legislature against passing a budget with a structural deficit stemming from unaddressed SAL requirements. In contrast to the Governor’s approach, we recommend the Legislature address the state’s constitutional SAL requirements in its budget architecture throughout the multiyear period. Another key way to address future SAL requirements, or a budget problem resulting from a recession, would be to increase reserves this year. The state has a $52 billion surplus—now is the time to prepare for these looming budget problems.

This brief presents our office’s independent assessment of the condition of the state General Fund budget through 2025‑26 under our forecast of revenues and spending, assuming the Governor’s May Revision policies were adopted. The first section of the brief presents our analysis of the budget condition under these assumptions. The second section provides our comments.

2022‑23 Ending Fund Balance Under LAO Estimates Nearly Identical to Administration’s. Figure 1 summarizes the budget’s condition assuming the Governor’s May Revision policies were enacted, but using LAO estimates of multiyear revenue and spending. As the lefthand side of the figure shows, under these assumptions, the state would end the budget year with $3.3 billion in the Special Fund for Economic Uncertainties (SFEU)—the state’s discretionary reserve akin to an ending fund balance. This estimate is only $100 million lower than the administration’s estimate. 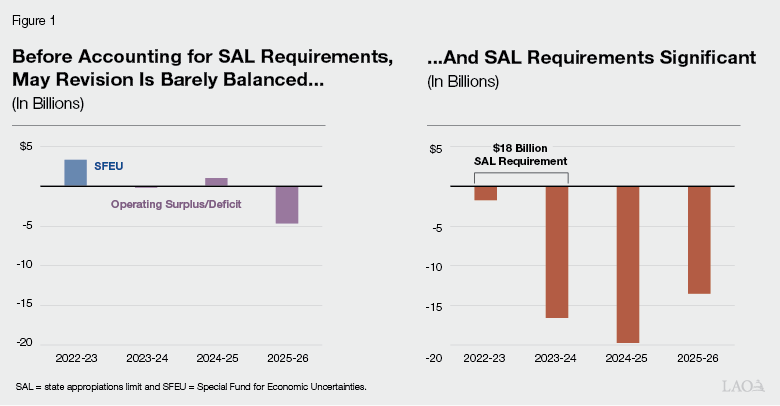 Before Accounting for State Appropriations Limit (SAL) Requirements, May Revision Is Barely Balanced. Under our estimates of revenue and spending in the out‑years, the state would have a very narrow operating deficit in 2023‑24, a small operating surplus in 2024‑25, and a larger operating deficit in 2025‑26. An operating deficit means expenditures would be greater than revenues in that year. However, under our estimates, the SFEU would remain positive throughout the period, which signals the budget is barely balanced under these assumptions. These findings are quite similar to the Department of Finance’s (DOF’s) estimates. Under the administration’s assumptions, the state would have two years of narrow operating surpluses and one year of an operating deficit. However, very importantly, neither of these estimates account for SAL requirements. While we show what these requirements would be on the righthand side of the figure, DOF does not include out‑year SAL requirements anywhere in its estimates. We discuss these requirements on the next page.

Similar Topline Estimates Obscure Two Important Differences. Although the topline estimates of our office and the administration are very close, there are two key differences between our outlooks which largely offset one another. They are:

Adopting LAO Revenues Mitigates Budget Impacts of a Recession… Although predicting the next recession is impossible, economic indicators currently suggest a heightened risk of recession within two years. Past recessions—with the exception of the one induced by the pandemic—have resulted in cumulative revenue losses of tens of billions of dollars. In two recent recessions, in fact, total revenue losses were around $100 billion. These recessions necessitated very difficult choices for the Legislature about how to cut spending to balance the budget. As we have discussed previously, the Legislature has several tools to prepare for and use during a recession, which can help the state avoid or delay these difficult choices. And while reserves—which are significant—are one of the most critical tools, other steps are warranted given current conditions. Specifically, adopting our revenue estimates, which explicitly incorporate the current heightened risk of a recession, reduces the chances revenues fail to meet expectations. Coupled with multiyear planning, this approach can prevent the state from expanding programs to unsustainable levels.

…But if Revenues Are Higher, SAL Requirements Increase. While adopting lower revenue estimates can help the Legislature avoid some of the downside risk associated with a recession—and accompanying revenue losses—doing so also could underestimate the SAL requirements the state might face in the coming years. Every dollar in tax revenues that the state collects above the limit must be spent on purposes that meet SAL requirements or returned to taxpayers. As a result, higher revenues would result in dollar‑for‑dollar increases in SAL requirements. The trade‑offs between different revenue assumptions exemplifies the dual risk the state’s budget now faces: on the downside, the risk of a recession and, on the upside, the risk that the state’s constitutional requirements—paired with its current budget commitments—will exceed its available resources. Counterintuitively, as we described in a past report, in the coming years, the state is very likely to face budget problems whether revenues grow faster, slower, or as expected.

Considering Implications of Prolonged Inflation Warranted. Meanwhile, inflation remains a key unknown for the budget’s condition. Inflation has accelerated recently, with prices increasing 8 percent over the last year. While it has contributed to the rapid growth in revenues in 2021‑22, it also means each dollar of state spending will not go as far as it would have in recent years. In some areas of the budget, inflation‑related spending adjustments are automatic under current law, but in many cases, the Legislature needs to take action if it wishes to enact them. If inflation adjustments are not enacted, service and benefit levels will decline in real terms. Cash assistance is a straightforward example of this dynamic. Current law does not guarantee automatic adjustments to the state’s cash assistance programs when inflation increases. Instead, inflation means the purchasing power of recipients’ state assistance declines unless the Legislature acts to adjust benefit levels. While annual inflation has not been a major concern for many years, prolonged heightened inflation could have significant impacts on state service levels. Consequently, we think the administration’s attention to this issue in its multiyear estimates is warranted.

Plan for SAL Requirements Now: Some Short‑Term Remedies, but Only Two Long‑Term Solutions. The administration’s multiyear budget estimates do not include an estimate of the state’s future SAL requirements nor do they include any plan to address them. In a past report, we outlined some short‑term options the state has to forestall budget problems that are likely to arise in the next few years. Although these options would significantly mitigate these short‑term issues, they are not long‑term solutions. Over the long term, the Legislature has two choices: (1) reduce taxes in order to slow revenue growth or (2) request the voters change the SAL. We recognize that some policymakers have signaled an interest in pursuing changes to the SAL with voters by 2024. In the meantime, we strongly caution the Legislature against passing a budget with a structural deficit stemming from unaddressed SAL requirements. This would ensure the state budget remains on solid footing regardless of possible future changes to the SAL. In contrast to the Governor’s approach, we recommend the Legislature address the state’s constitutional SAL requirements in its budget architecture throughout the multiyear.

Additional Reserves Would Mitigate SAL and Recession‑Induced Budget Problems. The administration has pointed to two key tools in the May Revision that help prepare the state for future SAL requirements or a recession: (1) a significant amount of temporary spending and (2) reserve deposits planned in 2024‑25 and 2025‑26. While temporary spending can help forestall budget problems, it cannot entirely address these issues for two reasons. First, more than half of the administration’s temporary May Revision proposals are SAL excludable, meaning that this spending cannot be reduced to address a budget problem that results from SAL requirements. Second, reducing this spending during a recession would still involve difficult choices for the Legislature. Moreover, the administration’s planned reserve deposits likely would come too late. Economic indicators point to a recession on the horizon within the next two years, not three‑to‑four years from now. The state has a $52 billion surplus this year—now is the time to prepare for these looming budget problems.