California has experienced unprecedented revenue growth over the last two years. After growing 30 percent in 2020-21, revenues from the state's three largest taxes (personal income, corporation, and sales taxes) likely will grow an additional 20 percent in 2021-22. This boom in state revenues mirrored an equally rapid rise in stocks, housing, consumer spending, and corporate earnings across 2020 and 2021. Such a boom is very unlikely to continue. In fact, evidence is growing that this period of rapid economic growth could be coming to an end and that an economic slowdown may be on the horizon. Consistent with this evidence, our May revenue outlook incorporates a heightened risk of recession over the budget multiyear.

Revenue Assumptions and Fiscal Risks. As the Legislature considers revenue assumptions around which to build a budget, it faces two major types of risks. On one hand, assuming improbably robust growth would create a high risk of shortfalls in the future. On the other hand, assuming highly pessimistic revenues (such as those matching a full-blown recession) would create a high risk of missing opportunities to fund worthwhile programs and services. As such, a prudent approach would be one that balances these risks by making an assumption somewhere in between these two extremes.

Our Forecasting Approach. To help the Legislature decide how to balance these risks, we aim to produce a revenue forecast that will be least wrong most often. Such a forecast must balance risks across a wide variety of scenarios. This approach requires us to assess the relative chances of continued growth versus slowdown. Currently, our assessment suggests a heightened downside risk, which is reflected in our modest growth assumptions.

In the first section below, we discuss signs that the economy may be slowing. In subsequent sections, we summarize our May revenue outlook and discuss some related issues.

Economic and Revenue Slowdown May Be on the Horizon

Economic Indicators Offer Warning. Predicting precisely when the next recession will occur is nearly impossible. Historically, however, certain economic indicators have offered warning signs that a recession is on the horizon. As shown in the figure below, many of these indicators currently suggest a heightened risk of a recession within two years. High inflation and tight labor markets suggest an overheated economy is struggling to find avenues for further expansion, an observation seemingly supported by a decline in real gross domestic product in the first quarter of 2022. Home sales have declined as mortgage rates have risen rapidly. Consumer sentiment has fallen to levels typically seen only during recessions. Changes in prices of certain U.S. treasury bonds suggest financial markets may be pessimistic about the economic outlook. In the last five decades, a similar collection of economic conditions has occurred six times. Each of those six times a recession has occurred within two years (and often sooner). 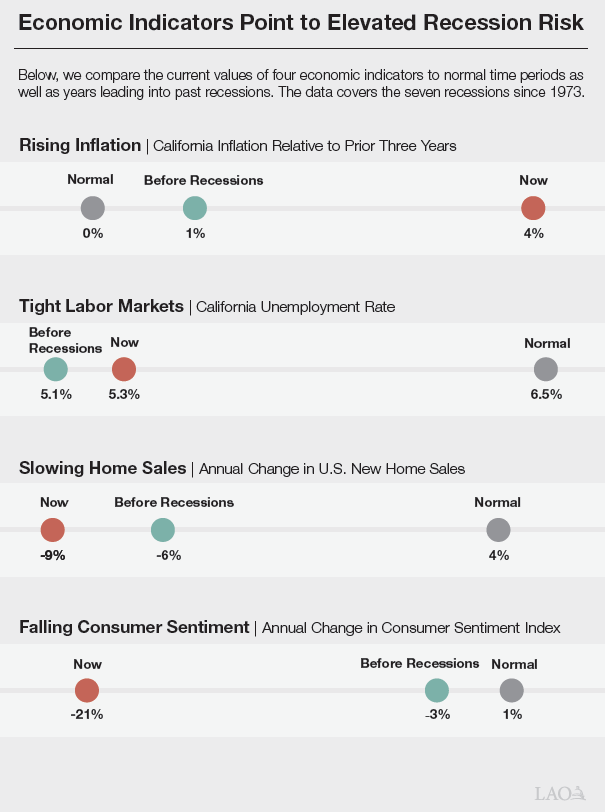 Current Conditions Weigh on Revenue Outlook. Past experience does not guarantee that we are heading for a recession. In our judgement, however, the chance of a recession is high enough to pose a significant risk for the budget. As the figure below shows, following the six prior episodes with similar economic conditions to today, state revenues posted below average growth. Our May revenue outlook reflects the risk of lackluster revenue growth suggested by this historical experience. As a result, our forecast includes weaker than usual revenue growth across the multiyear. A risk, however, is not a certainty. As such, our revenues do not match a true recessionary outcome, which would involve steep revenue declines. 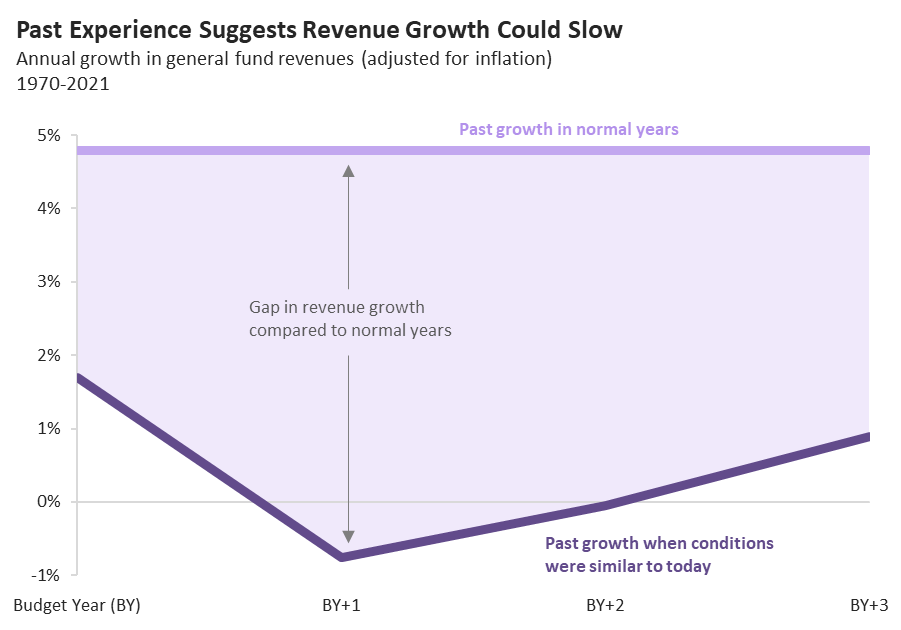 Big Jump in Current Year Revenues, Relatively Flat After That. The table below summarizes our forecast for total revenues from the state’s three largest taxes. Our forecast includes a 20 percent increase in revenues in 2021-22, followed by a decline of about 4 percent in 2022-23 and modest growth in the out years.

Wide Range of Possible Outcomes. While our forecast presents the estimates we think are most likely to be least wrong, they will be wrong to some extent. The figure below shows how historical experience suggests revenue could differ from our main forecast. As shown on the figure, this uncertainty is very large by the end of our forecast in 2025-26. In that year, revenues ending up $50 billion above or below our forecast is entirely plausible. 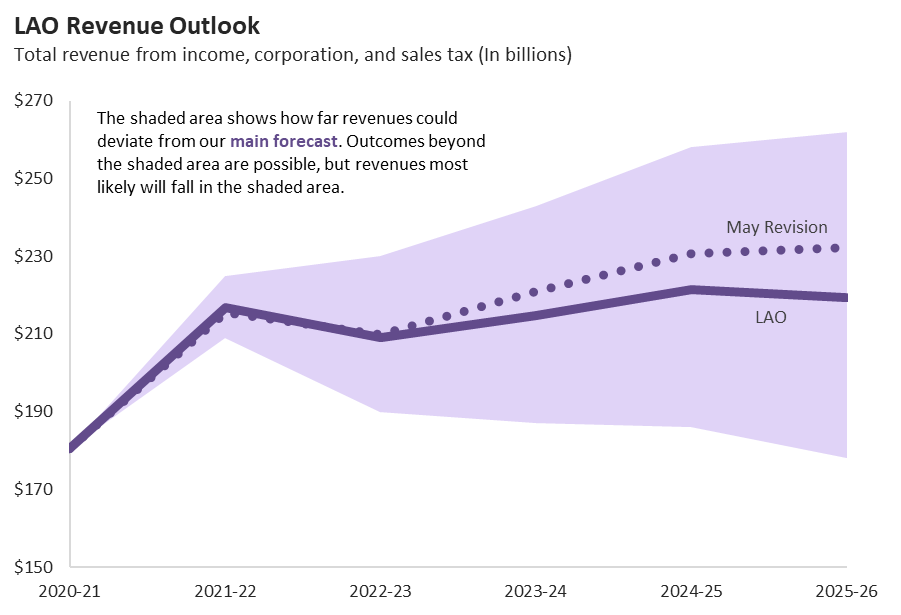 Inflation has accelerated recently, with prices increasing 8 percent over the last year. This has contributed to the rapid growth in revenues in 2021-22. The consensus among economic forecasters is that inflation will moderate significantly over the next year. Our revenue outlook is consistent with that expectation. Should rapid inflation continue, however, this could cause revenues to come in higher than our forecast, even if economic conditions worsen. Under such a scenario, higher revenues would not necessarily represent increased capacity for new spending. This is because persistently high inflation also would increase the state’s costs to meet its existing obligations.

Elective Pass-Through Entity Taxes. Last year’s budget package included a new elective tax for S corporations, partnerships, or LLCs that is in place from 2021 to 2025. Under the elective tax, businesses can choose to pay additional corporation taxes which their owners can recoup by claiming credits against their personal income taxes. While this has a roughly neutral effect on most taxpayers total state tax payments, it allows them to lower their federal taxes. While the net effect of these elective payments on state tax revenues is relatively minor, timing issues related to the elective tax result in year-to-year fluctuations in tax collections. The elective tax collections in each fiscal year span two tax years. For example, the 2022-23 collections generally will reflect half of the tax year 2022 payments and half of the 2023 payments. However, this is not true for the first and last fiscal years that the elective tax is in place. For 2021-22, collections reflect all of the 2021 payments (because the policy was not in place during 2020-21) and half of the 2022 payments, resulting in one and a half years’ worth of collections. Conversely, in 2025-26, collections reflect half of 2025 but no collections from 2026 because the tax will expire, resulting in a half year of collections. This timing pattern results in a temporary bump in revenues in 2021-22, a decline in 2022-23, and a further decline in 2025-26.

Net Operating Loss Deduction and Credit Suspensions Ended. In response to anticipated revenue declines early in the pandemic, the state enacted limits on businesses’ ability to use credits and net operating loss deductions to reduce their tax payments. These limits originally were intended to be in place through 2022. Earlier this year, the Legislature acted to end these limits in 2021 instead. The expiration of these limits results in lower corporation tax collections, beginning in 2022-23. This contributes to the decline in our revenue estimates in 2022-23 relative to 2021-22.