Persistent high inflation presents federal and state policymakers with an economic problem not seen in roughly four decades. In fact, during much of the past 15-year period, inflation not only was subdued, it consistently ran below the Federal Reserve’s (the Fed’s) target of 2 percent. Chronically below-target inflation eventually prompted the Fed in August 2020 to adjust its policy framework to combat this tendency. Not long after, however, in the wake of the COVID-19 pandemic, inflation trends and the Fed’s orientation to them began to reverse. Once it emerged, inflation accelerated throughout 2021 and has remained elevated this year with as yet indeterminate signs of abating.

The abrupt reversal of inflation’s decades-long trend of subsiding puts the Legislature in unfamiliar economic territory for budgeting and policymaking. As we prepared our fiscal outlook for the upcoming 2023-24 budget cycle, our office forecasted that heightened inflation will continue to be part of the economic backdrop. In addition, with the inflationary conditions in mind, we undertook a separate analysis examining how high inflation interacts with various types of state budget expenditures. These analyses allow us to evaluate two key questions that come to mind in light of the current period of high inflation. First, what is the main channel through which high inflation affects the state’s budget condition? Second, how exposed is the state’s cost structure to the effects of high inflation? The broader concerns related to inflation also give rise to an important question from the opposite direction: Should the Legislature consider whether its policy choices will influence the level or direction of inflation in the economy?

Although high inflation often is most associated with rising prices and a higher cost of living, from a state budget perspective, the overriding worry is on the revenue side. High inflation poses a threat to revenues primarily because it raises the risk of a recession. The Fed, in pursuit of price stability (one half of its mandate; the other half being full employment), currently is attempting to cool the economy through more restrictive monetary policy which, by design, dampens demand. History suggests that it is difficult for the Fed to weaken demand enough to reduce inflation but not so much as to tip the economy into a recession. This reflects that the Fed’s tools for implementing changes in monetary policy are blunt and operate with a considerable lag, making attempts at fine-tuning very challenging.

The Fed’s primary tool for implementation of its monetary policy decisions is its ability to influence the federal funds rate. When the Fed raises the funds rate, it causes financial conditions to tighten, evidenced by generally higher interest rates throughout credit markets. Higher interest rates disincentivize consumers from borrowing and—by raising the cost of capital—dissuades firms from borrowing to make new investments. Relatedly, higher interest rates also increase the return on safer investments, such as treasury bonds and savings deposits. These factors weigh on the value of riskier assets, like home and stock prices. Historically, the reduction in spending by consumers and businesses resulting from higher interest rates is effective at easing the upward pressure on wages and prices. But it also corresponds with a slowdown in economic activity that can culminate in lower stock prices and recession. A decelerating economy—with or without a recession—combined with reduced capital gains from real estate or financial investments diminishes the state’s revenue outlook. Already, we estimate that in the current budget window—spanning 2021-22 through 2023-24—tax revenues will be $41 billion lower than what the 2022-23 Budget Act assumes. Although our outlook does not assume there will be a recession, should one occur, revenues easily could be another $30 billion to $50 billion lower.

How Exposed Is California’s Cost Structure to High Inflation?

When it comes to state expenditures, inflation adds a layer of complexity to the Legislature’s budget choices. While some spending areas, such as the Local Control Funding Formula and Medi-Cal managed care rates, include formulaic adjustments that automatically take inflation into account, others do not. For the many state programs that do not adjust automatically, appropriations are fixed at their existing level. Unless the Legislature appropriates additional funds, higher inflation itself does not cause the state to spend more. From a policy standpoint, however, higher inflation erodes the state’s purchasing power. This presents the Legislature with a conundrum. Absent a change in the appropriated level of funding, high inflation will result in a lower quantity or quality of state services than what the Legislature initially intended. Yet, to the degree that the Legislature were to offset this erosion with supplemental appropriations, it would exacerbate the deficit problem estimated in our fiscal outlook.

What about the spending areas that do, at least partially, adjust for inflation? Whereas automation and technological advancement have contributed to economywide gains in worker productivity, such gains are more limited in labor-intensive service sectors (including health care and education). In what economists refer to as a “cost disease,” these sectors largely are precluded from the disinflationary effects associated with advances in productivity and thus experience higher rates of inflation than the economy overall (see figure 1). It is not surprising, therefore, that over the years, the budgets of many U.S. states, including California, have increased faster than the Consumer Price Index given that large shares of their budgets go toward funding education, health care, and human services. Therefore, while significant elements of California’s cost structure are exposed to heightened inflation, it is not a new issue. 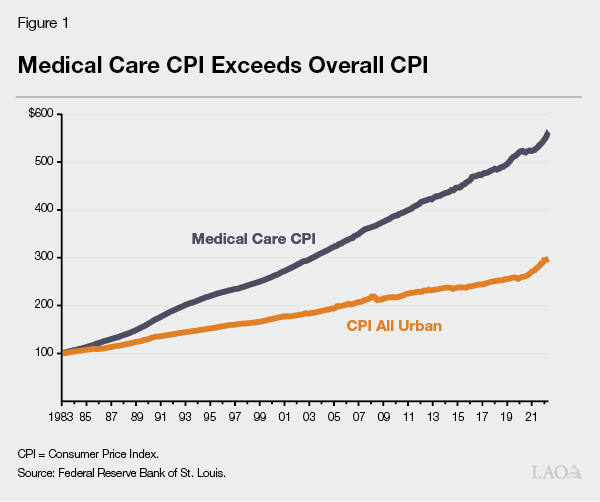 What Effect Does California’s Budget Have on Inflation?

In addition to considering the effects of inflation on California’s budget, there is also the question of whether the state’s budget policies have influenced inflation. Some observers have posited, for example, that distributing cash to consumers via tax rebates at a moment when inflation already is high only served to exacerbate the problem. Two responses to this critique come to mind.

First, as Harvard economist Jason Furman has pointed out, the U.S. states—including California—are open economies with fixed exchange rates against the rest of the nation. This means that a portion of any inflation created by the tax rebate program will be exported to the rest of the U.S. Once dissipated across the nearly $26 trillion U.S. economy, California’s $9.5 billion in tax refunds represent, at most, a trivial contribution to broader inflationary pressures. This is why inflation and the policy responses to lower it are best thought of as macroeconomic issues to be dealt with by federal policy officials.

Second, fiscal policy is most likely to be inflationary when governments run budget deficits. When deficits occur, the government is spending more into the economy than it is taking out via taxation. This can be inflationary, particularly if the economy is operating at capacity. California’s Constitution, however, largely prohibits this by requiring the Legislature to pass balanced budgets. All state spending into the economy—whether it goes toward health care, corrections, schools, or tax rebates—must be funded with revenue extracted from the economy.

By far, the biggest fiscal threat posed by inflation is its propensity to raise the risk of a recession. The main budget risk of a recession is the likely revenue loss that would accompany it and strain the state’s ability to fund its commitments. Yet, while no one welcomes the idea of an economic downturn, California is much more fiscally prepared for one now than before other periods of budget stress, such as the Great Recession. This is the culmination of a multiyear initiative aimed at enhancing state budget resilience. In addition to judiciously allocating a majority of recent large surpluses to temporary spending, the state also accumulated historically large budget reserves. But inflation and the increased risk of recession now weigh on our revenue outlook and contribute to our estimate of a moderately sized $24 billion budget deficit in 2023-24.

Our advice is that the Legislature identify solutions to the estimated budget problem that, for now, do not involve draining state budget reserves. Later, in the event there actually is a recession—not just the heightened risk of one—the Legislature could face a much larger deficit problem. In that scenario, the option to tap reserves, especially if they still were funded at their current level, would be particularly valuable.