At the LAO, we have long tracked state revenue collections on a daily basis. Most months, we will post information here at the end of the month as compiled revenue information becomes available, and we will publish daily updates during key collection periods such as mid-April. The information at the end of the month typically will come in three "waves," starting with income tax information provided by the Franchise Tax Board. To see our various revenue tracking blog posts from all these waves, use the "Revenue Tracking" tag accessible from our blog page at www.lao.ca.gov/LAOEconTax.

An Introduction to State Tax Revenue Tracking. In most months, we will post up-to-date information about key California state revenue collections, particularly those of the state's "Big Three" taxes: the personal income tax (PIT), sales and use tax (SUT), and corporation tax (CT). For those who are new to following state revenue collections, it is important to note up front that not all months are created equal. This post, for instance, discusses November 2014 PIT and CT collections. November is one of the least important revenue collection months of the whole year. December and January, by contrast, are among the most important months, as PIT taxpayers begin to settle up their year-end obligations in advance of the key April filing deadline and year-end bonuses also begin to be paid to employees in financial, technology, and certain other industries. (For methodology issues, see the "Methodology" note at the end of this post.)

November Combined Income Taxes Slightly Below 2014 Budget Projections. As shown in Figure 1 below, PIT and CT collections for the minor collection month of November were a combined $80 million below the administration's monthly projections, which were finalized at the time the 2014-15 Budget Act was passed in June. CT collections were above projections. November is primarily a withholding month for the PIT (meaning most collections come from withholding on Californians' paychecks). Despite November having one fewer collection day this year, compared to last, the administration assumed that PIT withholding would, on a year-over-year basis, grow at a faster rate in November than in almost any other month of this fiscal year. Because the administration's PIT withholding projection was, in our view, too optimistic for the month of November alone, the PIT shortfall shown in Figure 1 is not a cause for concern. 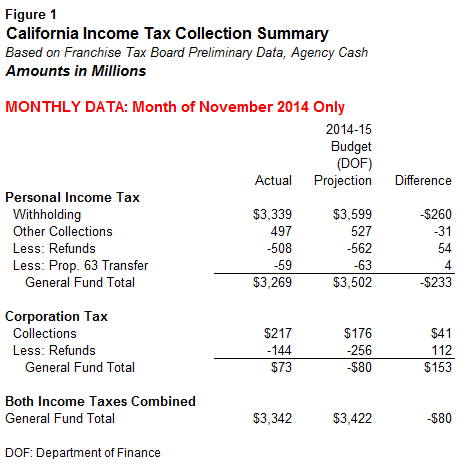 Income Taxes $1.6 Billion Above Budget Projections for 2014-15 To Date. As shown in Figure 2 below, for the 2014-15 fiscal year to date, combined PIT and CT collections are running $1.6 billion above the administration's projections, which were developed with the June 2014 passage of the 2014-15 budget. Specifically, corporation taxes are running $863 million above budget act projections for the fiscal year to date, and PIT is running $708 million ahead. In the PIT, the bulk of the positive trend has been in withholding. (SUT collections for November will be available in a few days; as of the end of October, SUT collections attributable to the current fiscal year were running around $200 million below budget act projections.) 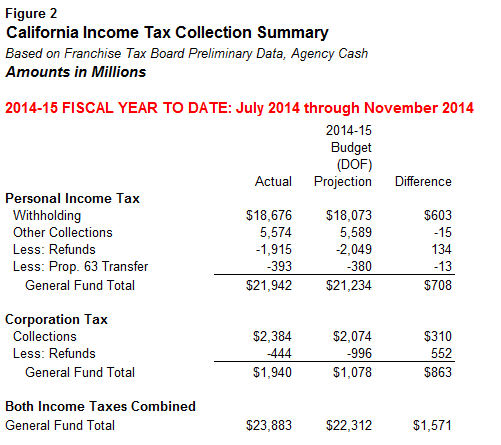 PIT Withholding and Corporation Taxes Both Quite Strong So Far This Fiscal Year. As shown in Figure 3 below, both PIT and CT collections in 2014-15 are running well ahead of collections for the same months of the prior fiscal year, 2013-14. PIT withholding is $1.5 billion (about 9 percent) above last year's totals so far. Corporation taxes are far above last year's totals due to strong collection and modest refund trends. 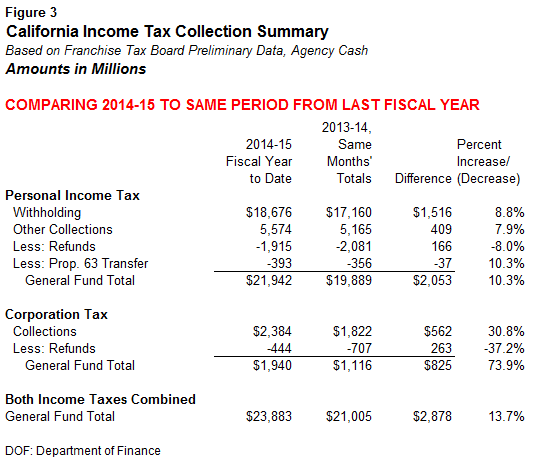 LAO Bottom Line: December/January May Be Key for How Much 2014-15 Revenues Exceed Budget Projections. In our recent Fiscal Outlook, we projected that 2014-15 state revenue collections would exceed the administration's budget act projections by about $2 billion, with expected PIT and CT gains offset by weakness, relative to the budget projections, for SUT and some minor state revenue sources. We also noted the significant likelihood that 2014-15 revenues could be billions of dollars above our projections due to strong asset price (particularly, stock market) trends. Nothing in the November income tax data changes this outlook. December and January, however, are important collection months for estimated payments that high-income PIT filers make on capital gains and business income, so collections over the next few weeks may be key in determining how much revenues exceed the 2014-15 budget act projections. As we noted in the Fiscal Outlook, virtually all higher revenues in 2014-15 will be required to go to schools and community colleges under the Proposition 98 minimum funding guarantee, and this could leave the state budget's bottom line worse off in future years in certain scenarios.

Methodology. We receive monthly revenue collection data from state tax agencies for the Big Three taxes, generally based on the "agency cash" measurement method that counts cash received and refunds disbursed in real time. ("Controller's cash," an alternative measurement method, is not as timely in some instances and, therefore, is not used by our office to track monthly state revenue collections relative to budget act projections.) Each month, preliminary compiled tax collection information comes in three "waves": (1) PIT and CT information from the Franchise Tax Board early each month, (2) SUT information from the State Board of Equalization a few days later, and (3) overall agency cash information in the Department of Finance's monthly Finance Bulletin at mid month. We expect to release two or three blog posts in most months tied to these three waves of information. Daily posts to the blog also will occur during some key revenue collection periods, including mid-April. Our posts focus on revenue collections attributed to the state's main operating account, the General Fund. For revenue tracking purposes here and in most state financial documents, the General Fund includes the Education Protection Account established by Proposition 30 in 2012.