The Governor’s initial 2016-17 budget proposal, released today, updates administration estimates of state General Fund revenues. In this note, we discuss the administration’s updated revenue projections through 2016-17. (We have not yet reviewed the administration’s multiyear budget estimates after 2016-17 or the separate Proposition 2 reserve calculations, which are complicated and are based on a particular calculation related to capital gains.) This note focuses only on the four largest state tax revenues (personal income, sales, corporation, and insurance taxes combined), which we call the “key taxes” below. Official budgetary documents often include other figures as “revenues,” such as Proposition 2 transfers that technically reduce revenues, so a focus on just these key taxes reveals the most important revenue assumptions underlying the budget estimates. 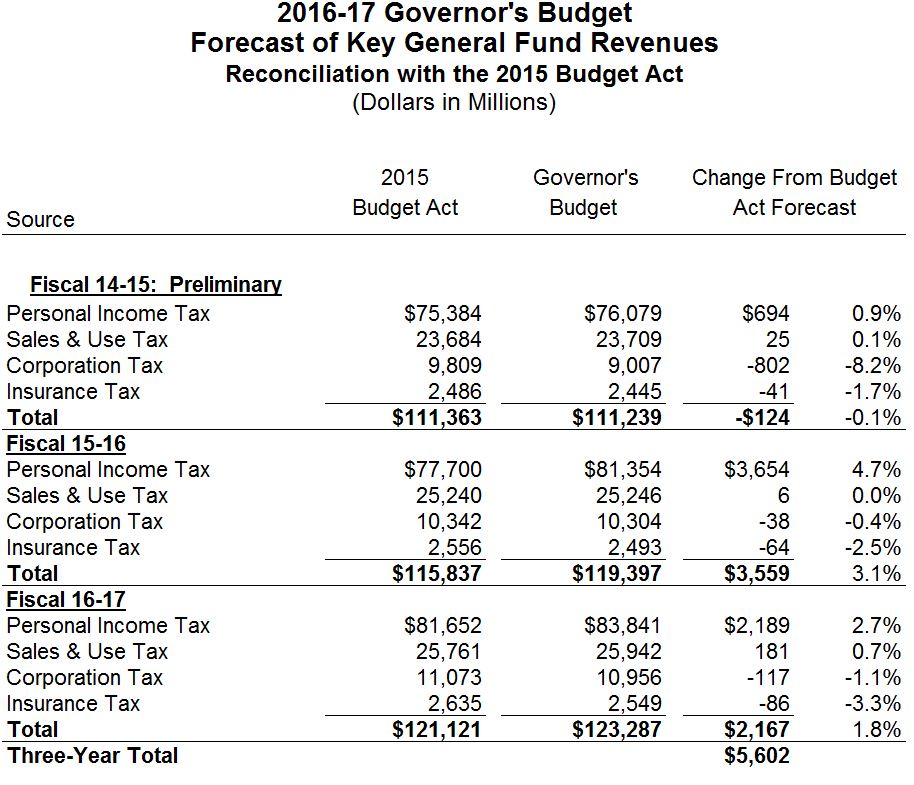 Strong Wage and Capital Gains Trends Drive Personal Income Tax Up. The 2016-17 Governor’s Budget Summary states that taxes on wages and capital gains are coming in higher than the administration’s expectations, as of last May. (This has occurred despite stock prices being a few percent lower than the administration’s economists assumed at the time.) Wages and capital gains income are taxed via California’s personal income tax (PIT), which makes up around two-thirds of General Fund revenues. The PIT is responsible for virtually the entire change in the administration’s key tax projections in 2015-16 and 2016-17.

Corporate Tax Refunds Drive Down 2014-15 Projections. Corporation tax (CT) refunds have been elevated during 2015-16—up 120 percent so far compared to last fiscal year. Under longstanding state practices for accruing (attributing) revenues to fiscal years, the vast majority of CT refunds—often related to returns filed one or more years ago—are “accrued back” to the prior fiscal year. Therefore, elevated CT refunds in 2015-16 depress the amount of CT revenues booked to the 2014-15 fiscal year. The administration expects this elevated level of refunds to continue for the rest of 2015-16, with refunds returning closer to historical averages in 2016-17. The higher-than-projected CT refunds drive the $802 million reduction of the administration’s 2014-15 CT projection.

Overall Revenue Estimates: A Solid Starting Point for Budget Deliberations. As the administration's key tax projections are similar to our most recent estimates, we believe the Legislature can feel comfortable using them as they begin budget deliberations. We will continue monitoring economic and revenue developments, and both the administration and our office will release updated estimates in May. Revenue estimates will change. By May, normal stock market volatility and relatively modest changes in the direction of the economy and tax collections could easily increase or decrease 2015-16 revenue estimates by a billion or two, and similarly, 2016-17 revenue estimates could easily go up or down by $3 billion or $4 billion. Changes in revenue estimates affect Proposition 98 and Proposition 2 budget requirements, as well as the availability of funds for non-Proposition 98 budget items.

Corporate Tax Refunds Are a Wild Card. We discussed the elevated level of CT refunds in our November 2015 Fiscal Outlook. Since our office completed our Fiscal Outlook projections in early November, CT refunds have remained elevated. Based on the information available to us now, we believe the administration’s CT refund assumptions are reasonable. That being said, the timing and amount of CT refunds is very difficult to project with precision. If CT refunds for the rest of 2015-16 are less than the administration now projects, CT revenues booked to 2014-15 could eventually rise by hundreds of millions of dollars. Higher 2014-15 revenues (if estimated in the 2016 May Revision) would increase school funding requirements, perhaps on a dollar-for-dollar basis. If CT refunds assumed to occur in the current fiscal year are merely delayed to 2016-17, then 2015-16 revenues also could decline by hundreds of millions of dollars, compared to the administration’s projections.

Near-Term Risks. There are always risks to the state revenue forecast. We discussed several of them in our November Fiscal Outlook. The state’s economy and budget are now highly reliant on the lucrative technology-driven economy of the Bay Area, with its soaring house prices. While both the LAO and administration projections are consistent with a slower rate of economic growth in the Bay Area, a more pronounced downturn could dampen state revenue growth more noticeably. Moreover, recent turmoil in Chinese financial markets has hurt the U.S. stock market, and California’s exports—down in recent months—could be vulnerable to further, pronounced shocks in the economies of China and other countries.