A Closer Look at the Administration's Property Tax Estimates

Property tax revenues are local government revenues in California, but they affect the state budget as more property tax dollars to school and community college districts often reduce state funding obligations for K-14 education. In our recent report, The 2016-17 Budget: Overview of the Governor's Budget, we commented that the administration’s recent estimates of property tax revenue appear too low.

We discuss these findings in more detail below. At the end of this post, we provide some technical details of our property tax assessed value model.

Administration Estimates $1 Billion Below Our Office’s Over Two Fiscal Years. The key figures relevant for the state budget are the property tax dollars received by school districts that can “offset” the state’s General Fund Proposition 98 funding requirements. As shown in the table below, the administration’s estimates of this property tax offset fall around $1 billion below our office’s November 2015 Fiscal Outlook estimates across 2015-16 and 2016-17. These differences persist beyond 2016-17 in our multiyear budget outlooks. Our differences with the administration primarily stem from differences on two key assumptions: (1) state savings associated with RDA dissolution and (2) growth in assessed property values. (The numbers from the LAO November Fiscal Outlook are those related to the publication's "main scenario.")

Governor’s Estimates of RDA Dissolution Savings Appear Too Low. The 2016-17 Governor’s Budget assumes state savings from RDA property tax residual distributions to schools will be about $1 billion in both 2015-16 and 2016-17. As shown in the table below, these estimates fall below our Fiscal Outlook estimates by $330 million in 2015-16 and $364 million in 2016-17. These differences grow to between $600 and $700 million annually in later years.

Same Data, Different Approach. Based on our understanding of the administration’s approach, our office and the administration use very similar data to develop our estimates of RDA dissolution savings. In essence, both offices start with actual savings from the prior year and project these numbers forward based on estimated growth in property values and changes in outstanding RDA debts. Our offices make similar assumptions about changes in property values and RDA debts. The primary source of our variance is how we use these assumptions to project future RDA savings. We believe the administration’s method provides consistently low estimates of RDA savings.

Recent Changes to the RDA Dissolution Process Affect RDA Residuals. As part of the 2015-16 budget package, the state made several changes to the RDA dissolution process. These changes included modifying successor agency administrative cost limits, clarifying the definition of a loan agreement between a former RDA and the city or county that formed the RDA, permitting the expenditure of certain proceeds of RDA bonds, and ensuring property tax levies intended to fund local agency pension costs are used for those purposes. These changes were expected to reduce RDA residuals. Our office's November Fiscal Outlook estimates accounted for these changes. Based on the administration’s projections, we adjusted our Fiscal Outlook RDA residual estimates down by $50 million in 2015-16, $180 million in 2016-17, and $20 million in each of the following years. As more information on the impacts of the 2015-16 changes come in, we will continue to adjust our estimates.

Different Assumptions About Growth in Assessed Values. The administration’s budget plan now assumes that assessed property values will grow by 5.6 percent in both 2015-16 and 2016-17, less than our Fiscal Outlook main scenario estimates of 6 percent in 2015-16 and 6.3 percent in 2016-17. We estimate that the administration’s lower growth assumptions translate to around $100 million less property tax revenue in 2015-16 and around $200 million less in 2016-17. Beyond 2016-17, our Fiscal Outlook main scenario assumes that annual growth in assessed values will be roughly half a percent less than the administration’s estimates.

Data Suggests 2015-16 Growth Higher Than Administration Assumes. Data on final assessments submitted by counties to the Board of Equalization show that statewide assessed values totaled $5.2 trillion for 2015-16, up 6 percent from $4.9 trillion in 2014-15. This data is the basis of our office’s higher estimate of assessed value growth in 2015-16. Adopting this higher assumption for 2015-16 alone would result in roughly $200 million additional revenue across 2015-16 and 2016-17.

Growth Estimates for 2016-17 and Beyond Are Less Certain. Our estimates of assessed value growth for 2016-17 and beyond are based on statistical models developed by our office using commonly accepted techniques. As with any statistical model, our method is imperfect, and its results become considerably less reliable with each additional year projected. Nonetheless, it represents our best estimate of the future assuming recent trends continue. Additional details about our model can be found at the end of this post.

Economic Downturn Possible in Coming Years. Our November Fiscal Outlook main scenario was based on an assumption of continued economic growth through 2019-20. An economic or stock market downturn, however, is possible during our outlook period, as we discussed in that publication.

Stock Market Slowdowns Not Always Tied to Housing Market Slowdowns. The Governor correctly points out the risk to the state budget from a downturn in the stock market. Should a stock market downturn occur during our multiyear fiscal outlook period, it is unclear how this would impact housing markets and, in turn, property tax revenues. The S&P 500 has experienced seven periods of decline (multiple quarters of negative year-over-year growth in real values) since 1980. In only two of these instances did home prices enter a period of decline during the following two years.

Our approach to estimate assessed value growth starts by dividing statewide assessed values into two broad groups: (1) commercial and industrial properties and (2) residential properties. We then develop a statistical model for each group that attempts to explain growth in assessed values based on changes in other economic factors. Our November 2015 Fiscal Outlook main scenario used estimates of future changes in commercial and residential building permits and home prices to project assessed value growth. Our projections of future changes in permits and home prices were based on additional statistical modeling, as well as analysis from the national firm with which our office contracts for economic data. We also attempted to incorporate various other economic variables—such as home sales and personal income—into our model but found no statistical relationship. It is important to note that our office develops two or more budget projections per year. Each iteration is updated to reflect the most recent trends in economic data and, therefore, use slightly different variables and specifications. The details of our most recent model are shown in the table below. 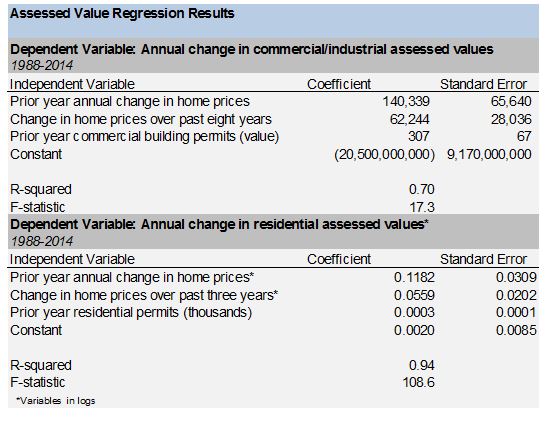