Note: Following the release of this LAO post earlier in February, the monthly Finance Bulletin from the Department of Finance (released on February 19) summarized monthly revenue collection data for January that essentially matched our numbers. That edition of the Finance Bulletin is here.

Revised January Tax Collection Data. California's January 2016 personal and corporate income tax collections have been revised upward since we released preliminary data on Feb. 3 (those now-outdated numbers are in the graphic here). In addition, recently released data on sales tax collections show that revenue source falling short of the administration's estimates for the month. We are informed, however, that this sales tax shortfall likely will be substantially offset by higher-than-expected collections already booked at the beginning of February. Below are the most recent figures for January collections of the state's "Big Three" General Fund taxes, which remain subject to additional revisions later. 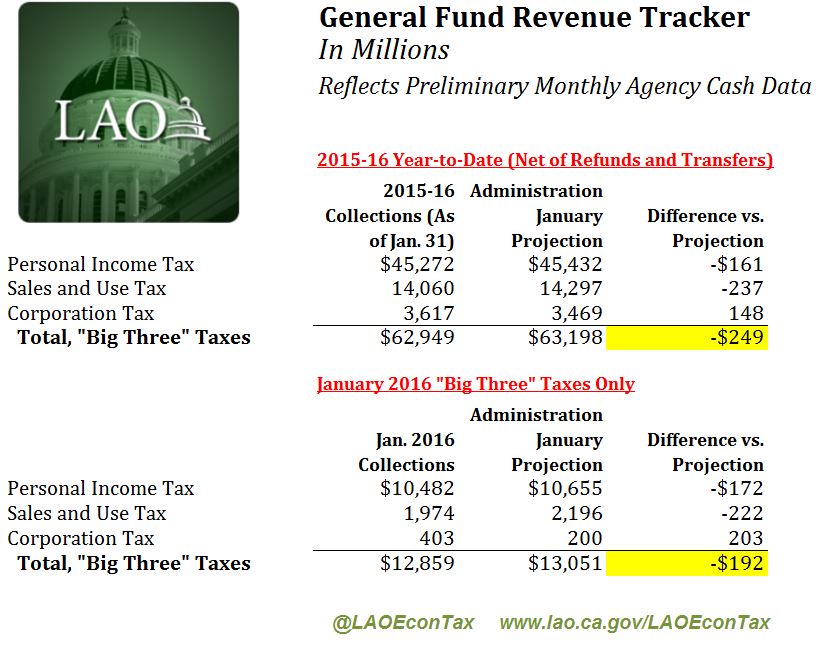 January is a major personal income tax collection month, as employees of technology, finance, and other firms receive year-end bonuses and high-income filers finish making their final quarterly estimated payments on 2015 business and capital gains income. Both withholding and estimated tax payments were a few percentage points above payments from the same month one year ago. This generally reflects the state's good economic growth during 2015. At the same time, these January collections were a few percentage points below the administration's most recent projections. As for the sales tax, January was a month when the normal due date for some filers—the last day of the month—fell on a weekend, which automatically extends the due date to the next business day, making it difficult to project collections precisely. As discussed above, it appears likely that some or all of the January shortfall of the sales tax will be offset by early February collections.

LAO Bottom Line. Economic growth has slowed somewhat, and stock markets languished in late 2015. The lackluster January income tax results—in particular, quarterly personal income tax payments—seem to reflect these trends. Five months of 2015-16 income tax collections remain, including the key income tax months of April and June. While we continue to think the administration's January revenue estimates are a good starting point for state budget deliberations, the possibility now exists for some revenue deterioration between now and the May Revision. As we noted on February 3, our biggest concern is that continued stock market weakness could affect PIT taxpayers' first two quarterly estimated payments for 2016 in April and June.