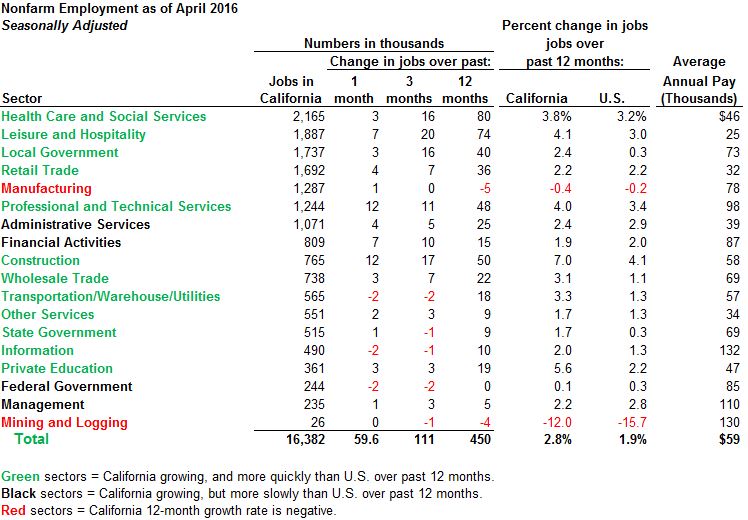 The April 2016 state jobs release from the Employment Development Department (EDD) on Friday reported that seasonally-adjusted survey estimates of the number of nonfarm jobs in California grew strongly last month. As summarized above, the EDD jobs report shows that the state's economy created 59,600 net new nonfarm jobs in April. The statewide total of 16.4 million jobs is up 450,000 compared to last April. The official unemployment rate continues to fall, decreasing to 5.3%. Among the 18 job sectors we track, over the last year, 12 sectors (in green above) have seen a faster rate of job growth in California than in the U.S. as a whole, 4 sectors (in black above) have grown in California but more slowly than in the U.S. as a whole, and 2 sectors (in red above) have seen a net job decline over the past year in both California and the nation as a whole.

LAO Comment. Monthly job growth of 59,600 is very strong for California. We caution, however, that it is important not to overemphasize a single month of job data. That is why our monthly summary, above, shows job trends over the last 3 and 12 months as well. We observe that the last few months of California job data have jumped from "mediocre" to "strong" to "mediocre" and now back to "strong." Over the last four months of jobs reports (including revisions), California has averaged job growth of 26,800 per month on a seasonally-adjusted basis. This rate of job growth is well above the apparent growth of the below-65 working-age population in the state (which seems to be under 20,000 per month), and this contributes to decreases in the official unemployment rate. This recent rate of job growth, however, is well below the average monthly job growth in the state during 2015 (which was about 40,000).

Other Items. Via the @LAOEconTax Twitter feed, we also summarized the following information:

The list of "Other Items" above was amended on June 1 to include data from the U.S. Bureau of Labor Statistics monthly release concerning metropolitan region employment as of April 2016.