Our office has written extensively about how California’s housing crisis—largely a result of too little building in coastal urban areas—has made it hard for many Californians to find housing that both meets their needs and is affordable. One perhaps underappreciated consequence of lackluster homebuilding in coastal California is that many workers are denied access to California’s high-wage job markets because they are unable to find housing. These workers are pushed to other parts of California or beyond where their wages tend to be lower.

We have noted this trend in previous work. In a recent post, we discussed how California’s population growth has been disproportionately concentrated in areas with below-average incomes in recent decades. Further, we have noted that in recent years California’s coastal urban areas have added very few low-income households, while at the same time many low-income households have moved from the coast to inland California.

Other researchers have suggested that the decreased flow of workers into high-wage, high productivity areas caused by limited home building has contributed to growing income differences across regions, as well as widening income inequality overall. Absent housing constraints, workers will migrate from areas with lower wages to areas with higher wages. As more workers are added to higher-wage areas, the supply of labor increases, putting downward pressure on wages. Conversely, as workers leave lower-wage areas, labor becomes more scarce, pushing up wages. These movements of workers can help to balance out regional differences in incomes, as the research mentioned above suggests. On the other hand, when the movement of workers is constrained due to lack of available housing income differences can widen.

This story appears to fit the experience of California over the last several decades. During the mid-twentieth century both coastal and inland California built housing at a rate much faster than the rest of the country. This high level of home building appears to have facilitated the movement of workers into high-wage areas. For example—as the map below shows—the Bay Area metro areas (San Francisco, San Jose, and Oakland) received net in-migration from relatively lower wage Central Valley metros (Stockton, Modesto, and Fresno) between 1936-1940. (Median annual household wage income during this period was about $1,100 in the Bay Area metros compared to about $550 in adjoining inland areas.) Similarly, there appears to have been net migration from Central Valley to the Bay Area in 1950—although data for this period is less comprehensive. 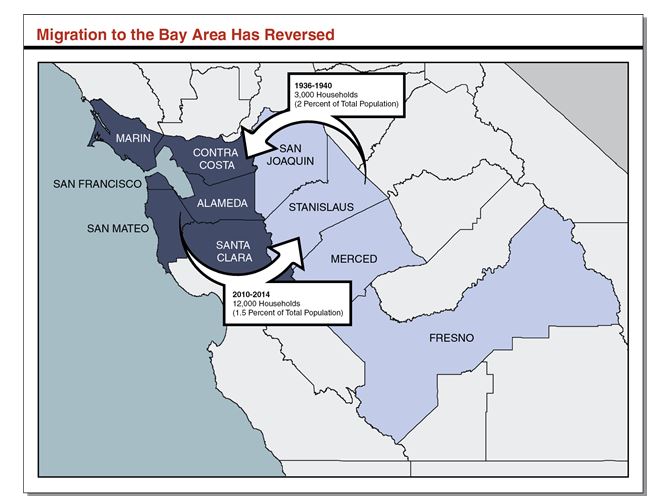 Between 1940 and 1960, income levels among California’s counties were converging. Incomes were growing fastest in places where they were low at the beginning of the period, and slowest where they were already high. This convergence creates the downward sloping pattern in the graph below. 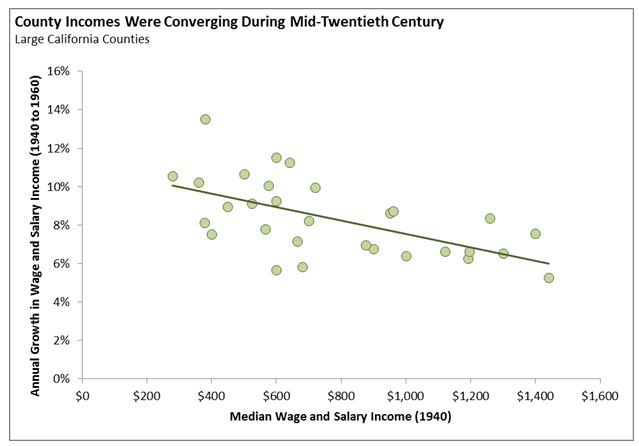 This pattern has reversed in recent years as home building has slowed along the California coast. As the map earlier in this post shows, in recent decades households have been leaving the high-wage Bay Area to move to relatively lower-wage inland areas. One likely explanation for this migration is that housing has grown twice as fast in Central Valley metros compared to Bay Area metros since 1990 (1.3 percent per year compared to 0.6 percent per year.)

With the decreased flow of workers from low-wage areas to high-wage areas, incomes levels across California’s counties have stopped converging in recent decades. Whereas the downward sloping pattern in the graph above for county income growth between 1940 and 1960 indicated converging incomes, the lack of such a pattern in the graph below for the period 1990 and 2010 suggests that convergence has stalled. (In fact, if anything there is a slight upward slope.) 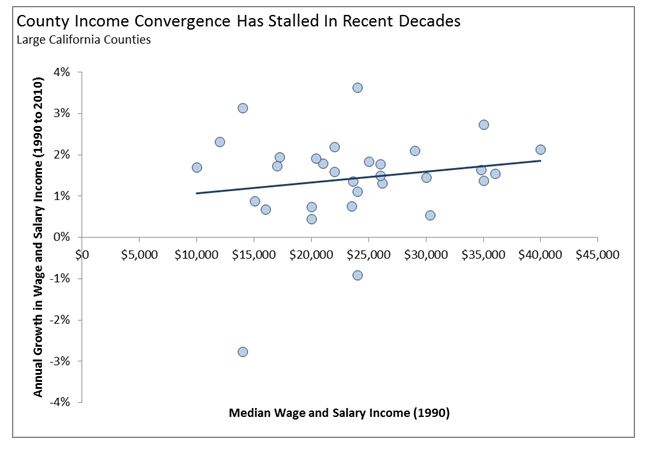 One possible explanation for the recent shift in migration away from high-wage places like the Bay Area is the high cost of housing. While incomes are higher, it may be that workers are forced to spend all of these increased earnings on housing, leaving them no better off than workers in less expensive inland areas.

Looking at a measure known as residual income, however, suggests that the opposite is true. Residual income is a measure of housing affordability that can be used to gauge whether families have sufficient income to pay for other necessities after they have paid for housing and transportation. Simply, residual income is a family’s monthly income minus monthly housing (mortgage, property taxes, home insurance, and basic utilities for homeowners or rent and basic utilities for renters) and transportation costs. Transportation costs are included because a family’s spending on transportation often is highly dependent on what type of housing they live in and where it is located.

The figures below show the results of our residual income calculations for workers in 26 large counties (those with workforces larger than 100,000). As the figure shows, those who work in places where housing is the most expensive—particularly the San Francisco Bay Area—actually have the highest residual incomes. Although housing costs are high in these areas, so are wages. This appears to more than compensate most workers for expensive housing. The lowest residual incomes instead are found in the parts of the state where wages are low—particularly the Inland Empire and Central Valley. 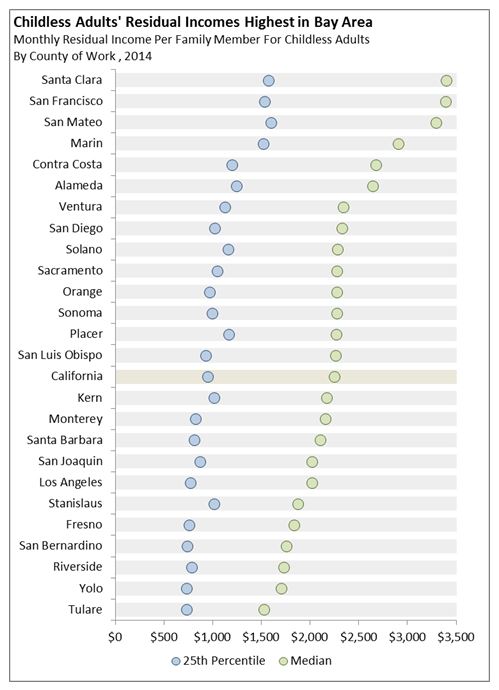 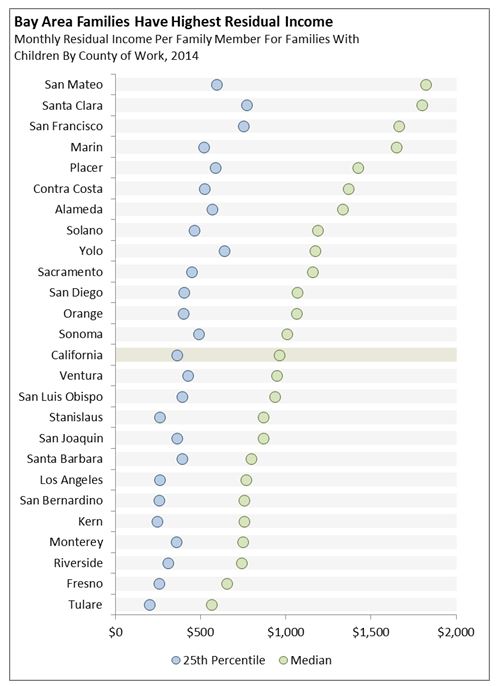 This data suggests that those who work in relatively inexpensive inland California have a harder time making ends meet than those working in high cost coastal areas. It further suggests that many workers are made worse off by moving away from high-wage places like the Bay Area. Why then do households (especially low-income households) appear to be leaving high-wage coastal areas? Based on the research discussed above and our office’s prior work, it seems likely that a major contributing factor is their inability to find housing.

A major takeaway from this data is that many of those who are affected by California’s coastal communities’ decisions to limit home building do not live in these communities. They are the workers who have been pushed to other parts of the state where their incomes are lower. This reinforces some findings from our analysis of a recent proposal by the Governor that would have placed some checks on local government authority over housing approvals. In that report, we noted that communities’ decisions about how much housing to build have impacts that extend far beyond their borders. Further, we noted that many communities do not appear to be fully accounting for these impacts. Because of this, state intervention may be needed to encourage more home building in key parts of the state.