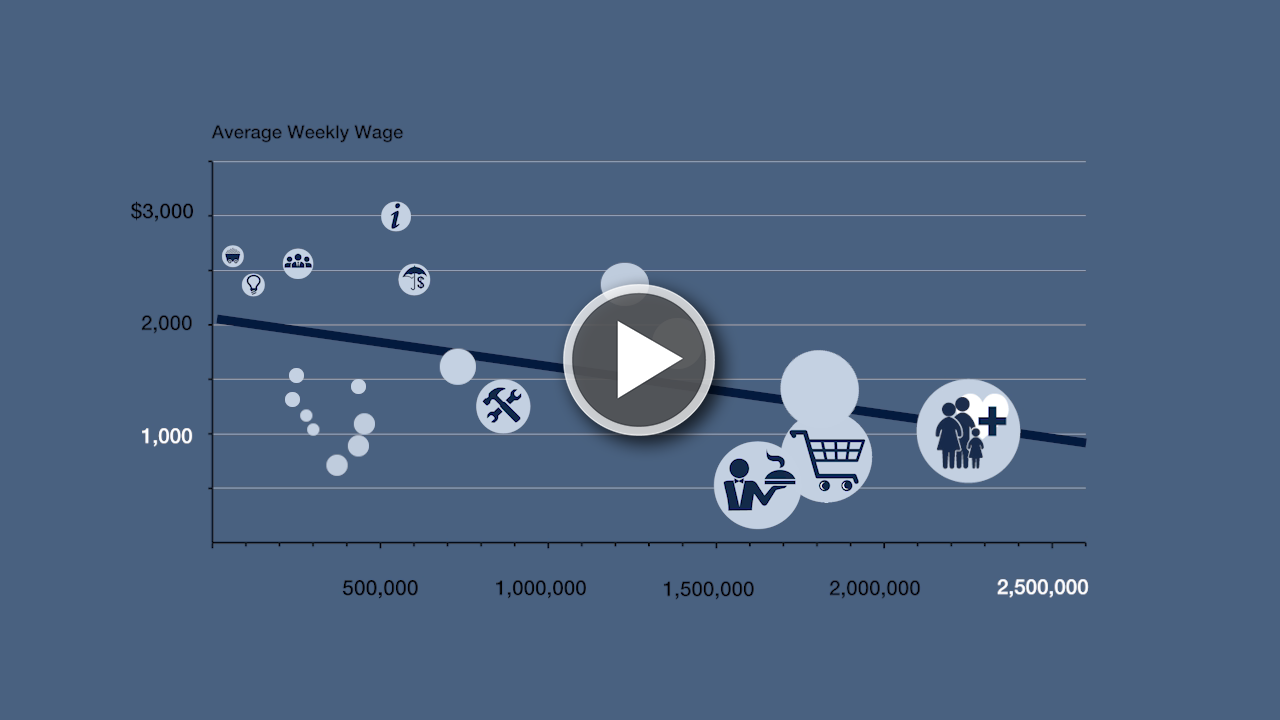 In this post and the video linked above, we describe trends in industry wages in California between 1990 and 2016.

About the Data. In this post, we describe changes in average weekly wages by industry using data from the Bureau of Labor Statistics’ Quarterly Census of Employment and Wages (QCEW). QCEW wage data include most forms of employment compensation, including bonuses, stock options, and tips. However, the data exclude individuals and pay that are not covered by unemployment insurance. For example, income from self-employment is excluded.

Private and Public-Sector Employment.  In the series we have separated public sector employees into three industries: “federal government,” “state government,” and “local government.” This means all other industries display only private sector employees. For example, “educational services” includes only private sector teachers and administrators, such as those teaching at private institutions of higher education. Teachers at the state’s K-12 public institutions are included in the local government category.

Figure 1 compares the average weekly wage of various industries to the total number of employees in California. As shown in the graphic, industries that employ more Californians tend to have lower wages. For example, the accommodation and food services sector—which includes hotels and restaurants—employed about 1.6 million Californians in 2016 and had average weekly wages of $446. By comparison, the finance and insurance sector —which includes banks, credit unions, and insurance companies—has much higher average wages but has many fewer employees. Elsewhere in this blog post, we refer to the group of six industries with average weekly wages above $2,000 per week as “higher-wage industries.” This group includes: information, management, finance and insurance, mining, professional and technical services, and utilities. 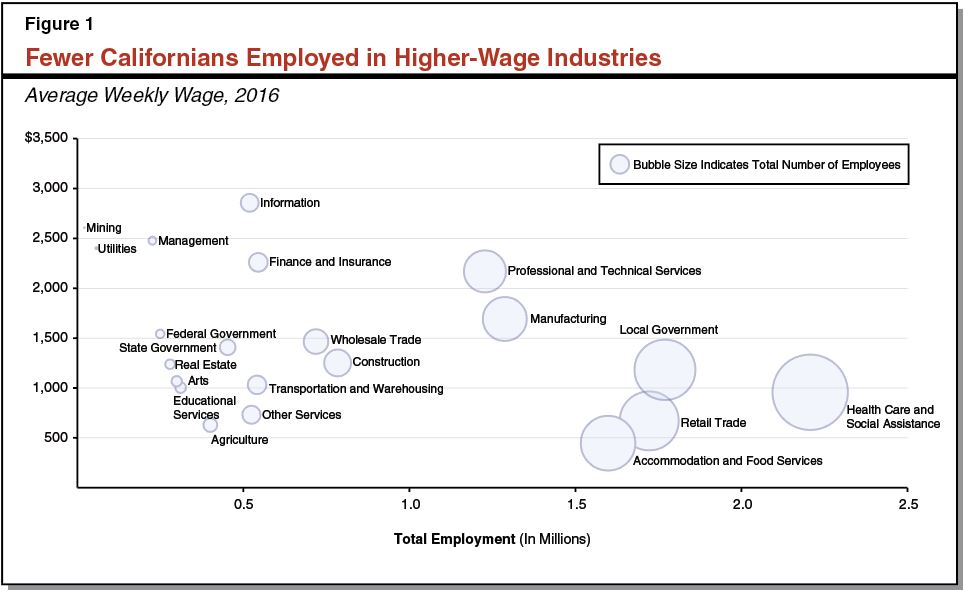 Wage Growth in California Has Been Concentrated in Higher-Wage Industries

Average Wages Vary by Industry. Figure 2 displays inflation-adjusted weekly wages, by industry, between 1990 and 2016. In the graphic, each industry is a single line. The group of six higher-wage industries shown in blue, which had the highest weekly wages in 2016, also had the highest wages in 1990. In 1990, average weekly wages in this group ranged from $1,190 in the finance and insurance industry to $1,602 in the utilities sector (in 2016 dollars). By 2016, this group of industries all had wages over $2,000 per week. Meanwhile, the group of 11 industries shown in red had lower average wages in 1990 — ranging from $368 in accommodations and food services to $1,054 in construction. 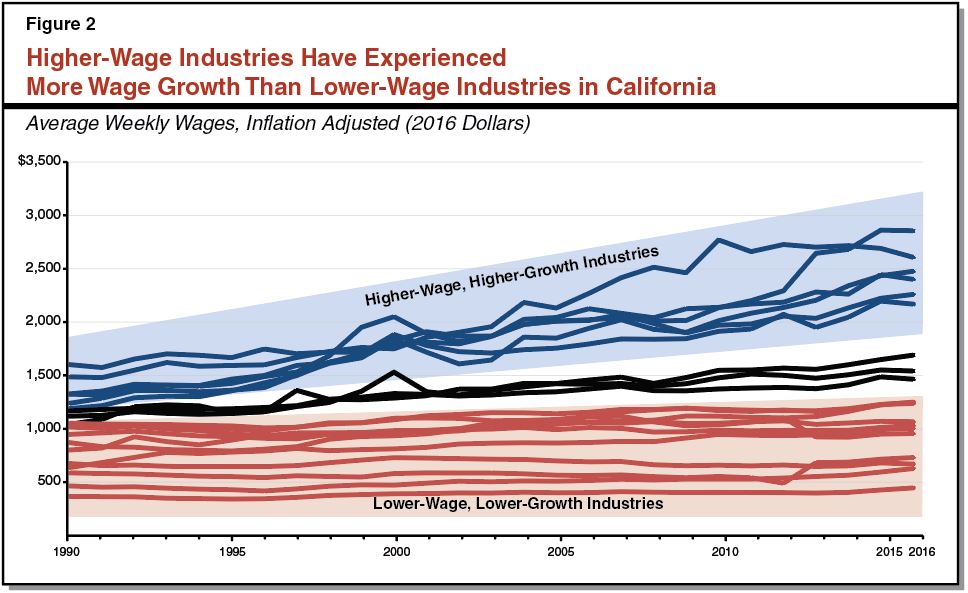 Higher-Wage Industries Have Generally Experienced More Wage Growth. The six higher-wage industries have also experienced the most inflation-adjusted growth in wages. Over the period, the information sector—which includes, for example, the production and distribution of software and motion pictures—has seen the most average annual wage growth at 3%. Five of the six industries shown in blue had average annual growth above 2%. Meanwhile, the lower-wage industries shown in red in Figure 2 have experienced less wage growth. All 11 of these industries had wage growth of less than 2%. Six of the 11 industries have had wage growth below 1%. The retail trade sector—which includes establishments like grocery and department stores, gasoline stations, and car dealerships—had virtually no growth in real wages over the period.

Industries With Higher Wages and More Growth Employ Fewer Californians. Figure 3 compares average weekly wages in 1990 to average annual growth in wages, by industry. The size of the bubble represents the total employment in the industry: larger bubbles have more employees. Generally, Figure 3 shows that industries with higher wages and more wage growth have fewer employees. In particular, the six higher-wage industries each have an average of about 433,000 employees, while the remaining industries have an average of 876,000 employees. For example, the accommodation and food service, health care and social assistance, and the retail trade sectors each employ over 1.5 million Californians. But these industries also have lower wages and have seen less wage growth since 1990. Meanwhile, the information, management, and finance and insurance sectors have seen the most wage growth, have some of the highest average weekly wages, but employ far fewer Californians. 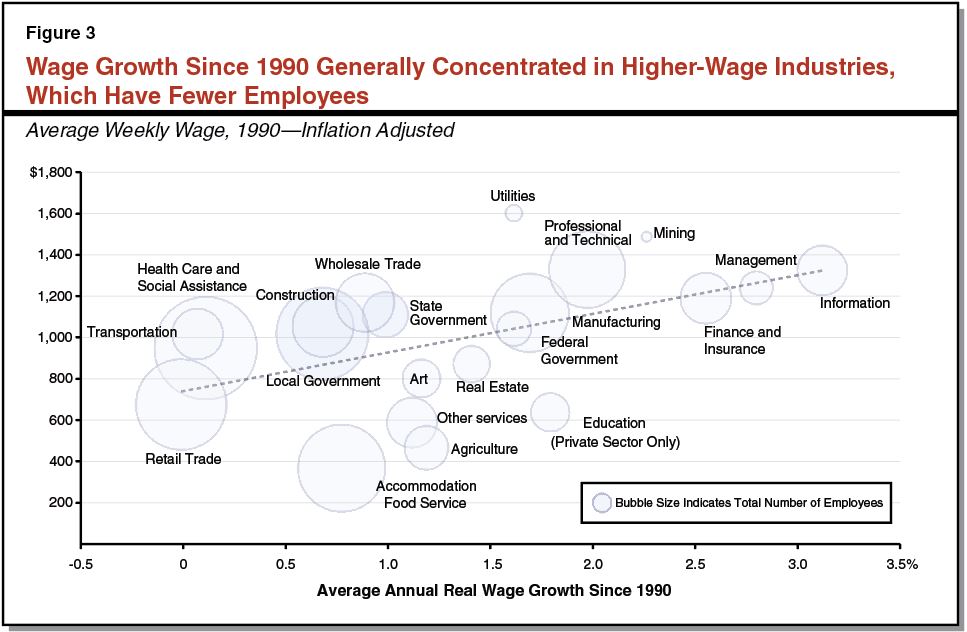 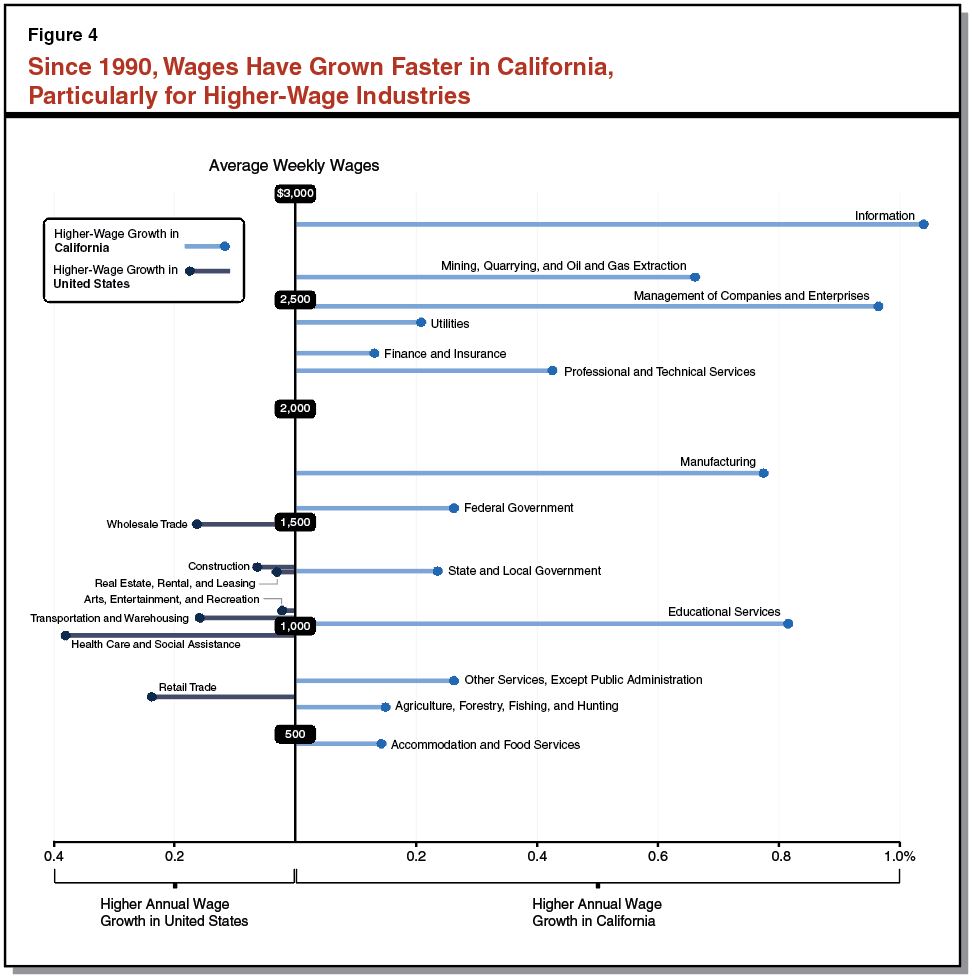 Figure 5 shows the percent of employees who have jobs in one of the six higher-wage industries. In general, employment in these higher-wage industries is more concentrated in the Bay Area and in Orange County, as well as some other parts of Southern California. In San Francisco, 39 percent of workers are employed in one of these higher-wage industries. For many counties, the largest higher-wage industry is professional and technical services—which includes, for example, engineering, computer programming, computer systems design services, and consulting. Los Angeles County and many Bay Area counties also have larger shares of employees in the information sector, which includes the motion picture industry, and technology firms that provide services like software publishing and data processing. 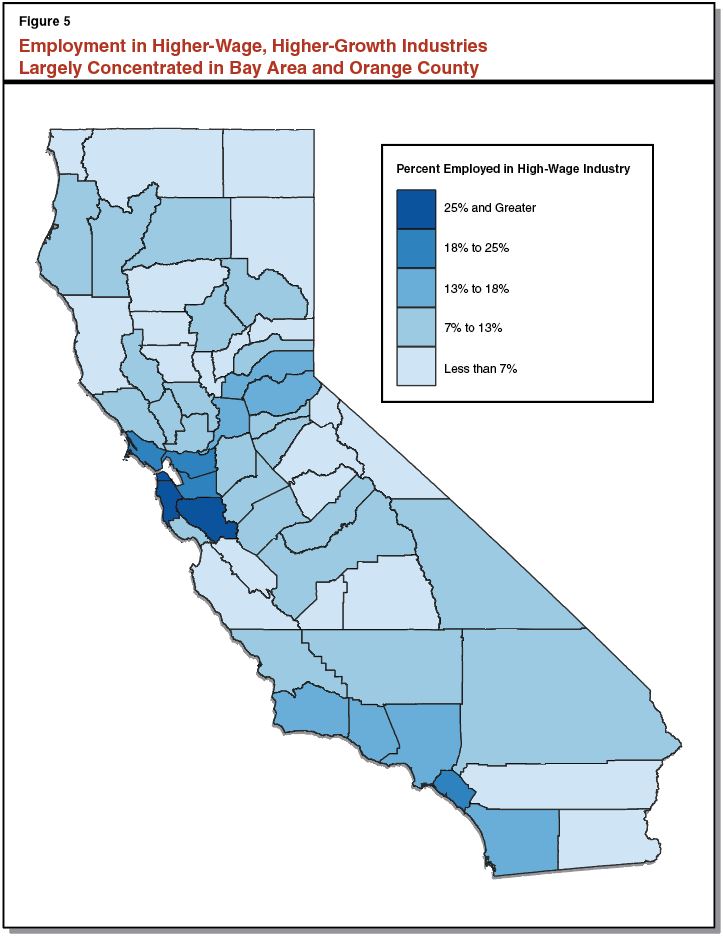