Overall, March is a minor revenue month for the state’s three main taxes. As shown in the figure below, collections from these taxes exceeded the administration’s January 2018 projections by $547 million (8 percent). Personal income tax withholding outperformed the administration’s expectations by $369 million (6 percent). That positive result, however, was mostly offset by FTB payments and refunds falling short of projections. In addition, corporation tax (CT) collections greatly exceeded projections, which we describe below. Through the first nine months of the fiscal year, receipts from the three main taxes are running about $3 billion (about 4 percent) above budget projections. 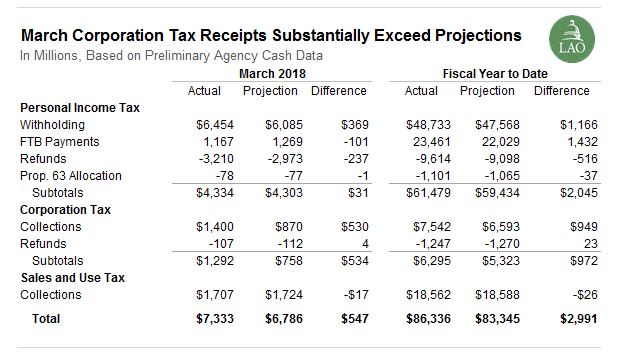 April is key revenue month for the state. In the coming days we be updating our revenue tracker each week day. Stay tuned.