April Is a Major Revenue Month. April is the most important revenue month for the state, as taxpayers file returns for their personal income tax (PIT) liabilities. Specifically, taxpayers in April make estimated payments on their 2018 tax liabilities as well as final and extension payments on their 2017 tax liabilities. April also is a heightened month for refunds. This activity is in addition to withholding from paychecks, which is fairly consistent throughout the year. 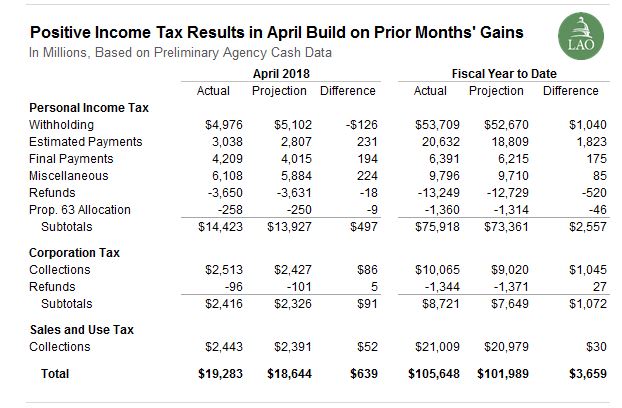 Making Sense of the December 2017 Surge in PIT Payments…Recent changes in federal tax law created an incentive for taxpayers to shift estimated payments relating to their 2017 tax liabilities from January and/or April 2018 into December 2017. December 2017 saw a large surge of estimated payments—$7.7 billion compared with $4.6 billion in December 2016, for a 66 percent year-over-year gain. In considering the impacts of federal tax changes on PIT revenues, a key question is to what extent that surge accelerated payments that the state would have otherwise received in January 2018 or April 2018. Tax payments appear to have been shifted somewhat from January 2018 to December 2017, as estimated payments in January were 3 percent below the year prior. That weakness, however, did not appear to carry into April 2018, as final and extension payments were 9 percent above the year prior. Over the December 2017 through April 2018 period, payments relating to 2017 tax liabilities were almost 21 percent above payments over the same period of 2016-2017. This suggests that the December 2017 surge was not just a matter of timing. Rather, ongoing growth in tax payments appears to be healthy.