Governor's 2015-16 Budget Proposal and the LAO's Initial Response. The Governor introduced his initial 2015-16 budget proposal on Friday, January 9. Our office released our initial take on the plan, the LAO's annual Overview of the Governor's Budget, today, January 13. Our Overview contains a brief discussion of some key economic issues facing the state as legislators begin to consider the Governor's plan, including the recent drop in oil prices and weakness in the international economic situation. Another key economic issue facing the state is housing, which we discussed in our November 2014 Fiscal Outlook. 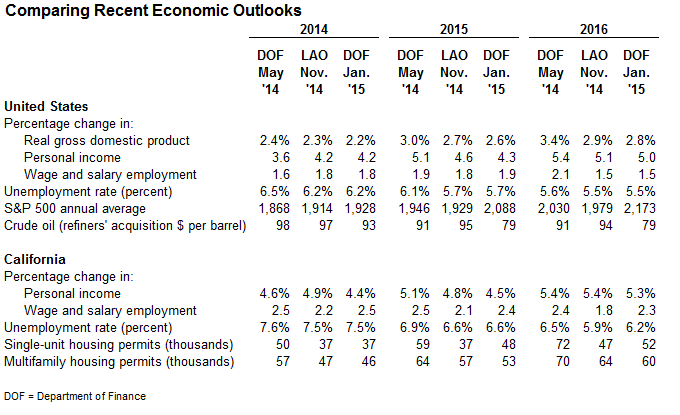 Next LAO and Administration Forecasts in May. Our office expects to release a new economic and revenue forecast in May, around the same time that the administration releases its May Revision forecast. In the meantime, we will continue to provide updates on the state's revenue and economic situation via this blog.