Bottom Line: California income tax withholding surged this week, pushing total collections since late March to within 0.9 percent of the comparable period in 2019.

The first graph compares withholding payments received this week to payments received in the comparable week in 2019, which ran from Monday, August 5 to Friday, August 9 of that year. Withholding was up 24 percent from the comparable week in 2019. As we noted last week, the first few processing days of each month tend to have high collections. This week included the first five August processing days, while the comparison week last year missed the first two August processing days. Collections over the past two weeks combined are up 5 percent from the same weeks in 2019. 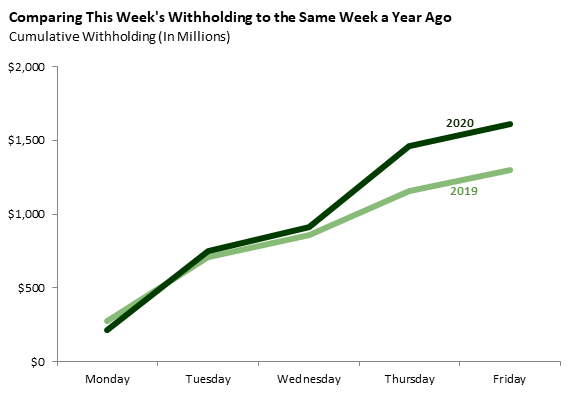 The second graph shows total withholding collections since Monday, March 23, when we first started to see evidence of an impact of the pandemic on withholding. As shown in the graph, total collections between March 23 and July 24 are down 0.9 percent ($222 million), the smallest percentage gap since this tracker was started. The cumulative decline stood at 2.2 percent ($472 million) last week. 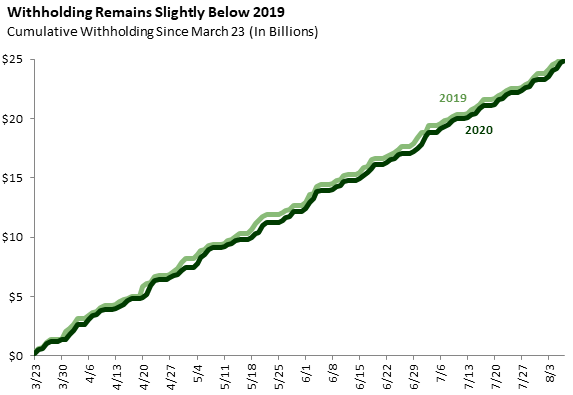 The final graph shows the year over year changes in cumulative withholding for California in 2020, the United States in 2020 (from the federal income tax), and California in 2009 at the trough of the Great Recession. California’s withholding decline this year has been less steep than it was in 2009, and not nearly as sharp as the federal decline this year. While California’s economy has been hurt at least as badly by the recession as the national economy has, its withholding collections have likely held up better because its income tax falls more heavily on the higher-paid workers who have experienced fewer employment losses than their lower-paid counterparts. Federal withholding this week was down slightly from 2019, and the comparable week in California in 2009 was down from 2008. 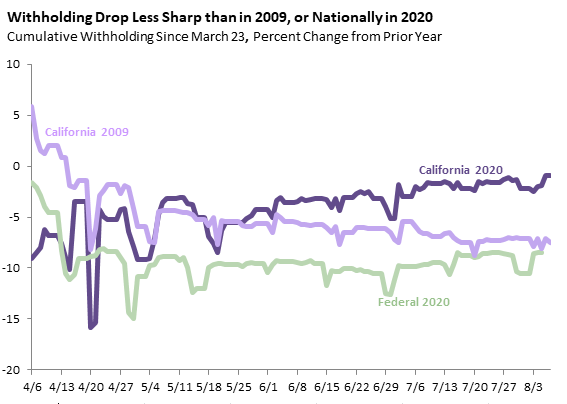