Bottom Line: California income tax withholding has run slightly behind 2019 over the past two weeks. Total collections since late March remain slightly above the comparable period in 2019.

The first graph compares withholding payments received this week to payments received in the comparable week in 2019, which ran from Monday, September 9 to Friday, September 13 of that year. Withholding was down 18 percent from the comparable week in 2019, which had an extra collection day because Labor Day fell on September 2 last year but September 8 this year. Considering the past two weeks combined, which included nine collection days in both years, collections were 3 percent lower in 2020 than in 2019. 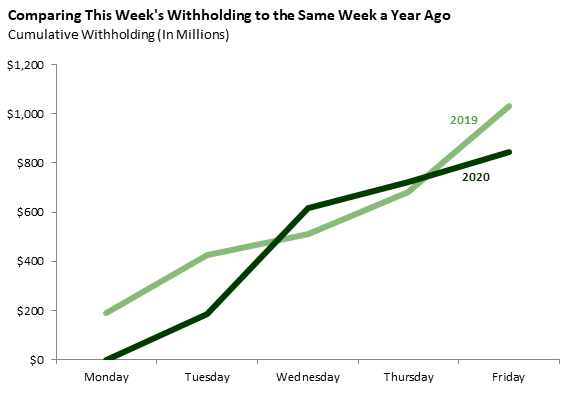 The second graph shows total withholding collections since Monday, March 23, when we first started to see evidence of an impact of the pandemic on withholding. As shown in the graph, total collections between March 23 and September 11 are up 0.5 percent ($148 million). Two weeks ago, the tracker showed an increase of 0.8 percent ($216 million). 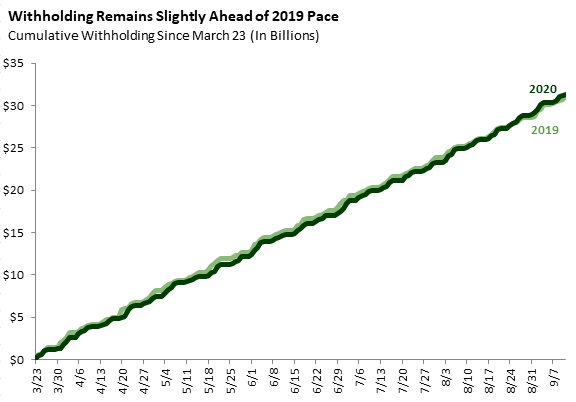 The final graph shows the year over year changes in cumulative withholding for California in 2020, the United States in 2020 (from the federal income tax), and California in 2009 at the trough of the Great Recession. California’s withholding picture has improved lately, unlike federal withholding this year or the state’s own withholding at the same stage in 2009. While California’s economy has been hurt at least as badly by the recession as the national economy has, its withholding collections have likely held up better because its income tax falls more heavily on the higher-paid workers who have experienced fewer employment losses than their lower-paid counterparts. Federal withholding over the past two weeks was down 11 percent from 2019, and the comparable weeks in California in 2009 were also down 11 percent from 2008. 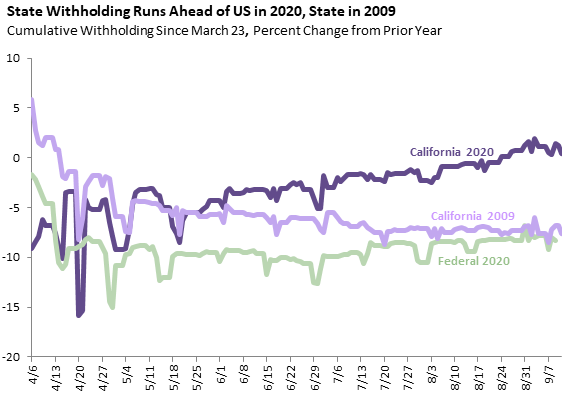