What Is Unclaimed Property? When the owner of personal property, such as a savings account, has no contact with their financial institution for a specified period (in most cases three years), that property is transferred to the State Controller’s Office (SCO). The state “escheats”—or takes temporary title in—these properties, maintaining an indefinite obligation to reunite the property with the owner. These “unclaimed” properties include bank accounts, insurance policies, stocks and other securities, and various other types of personal property.

Prior to Mid 1970s, Unclaimed Property Revenues Barely Noticeable. The figure below shows General Fund revenues from unclaimed property since 1965-66, adjusted for inflation. Until the mid-1970s, unclaimed property revenues were under $20 million annually. During this period, unclaimed property revenues were a very minor component of General Fund revenue, constituting an average of 0.05% of the revenue base. Based on court findings in Bank of America v. Cory (1985), the low revenues of the time appear to be due in part to a lack of enforcement of the law between 1959 and the mid-1970s. 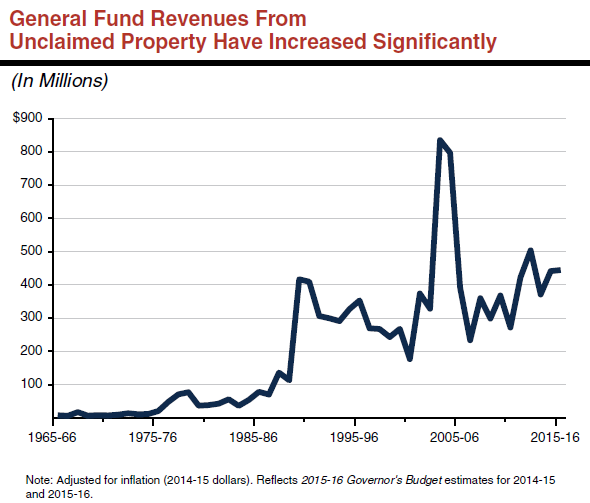 Revenue Begins to Grow in 1970s and 1980s. One factor that contributed to the increase in General Fund revenues in the mid-1970s and late 1980s is the shortening of the “dormancy period.” The dormancy period is the amount of time during which owners must have had no contact with their bank or other company in order for the state to escheat that property. A shorter dormancy period means that the state escheats a property sooner and that the owner has less time to keep their assets active. The dormancy period for including bank accounts and CDs was lowered from 15 years to 7 years in the mid-1970s. Later, the dormancy period for bank accounts, CDs, securities and insurance properties was lowered from 7 years to 5 years in 1988 and to 3 years in 1990. This was a contributing factor to the sharp increase in General Fund revenues from unclaimed property in 1989-90.

Unadjusted for inflation, the General Fund unclaimed property revenues were $258 million in 2002-03 before spiking to $669 million in 2003-04 and $658 million in 2004-05 due largely to a decision to accelerate the schedule for selling securities in the program. In 2006-07 General Fund revenues from the program totaled $205 million, and they have generally grown since then, albeit with some year-to-year volatility as indicated in the figure displayed above. The 2015-16 Governor’s Budget estimates that these "abandoned property" revenues—including interest assessments—will be $442 million in 2014-15 and $452 million in 2015-16.