At the January 22 meeting of the Senate Budget and Fiscal Review Committee, Senators Pan and Hancock asked our office to provide the committee with information on how tax expenditures affect California's state General Fund budget. This note responds to that request.

Other Valuable Sources of Information Online. The annual reports on tax expenditures by the state's Department of Finance (DOF) and the Franchise Tax Board (FTB) are helpful resources and available online. These reports are the principal sources of data for the information that follows. The State Board of Equalization also produces research on sales tax exclusions and exemptions, which includes information on both state and local sales tax laws.

Origin of the Tax Expenditure Concept. The term "tax expenditure" is attributed to Stanley Surrey, who, as a federal official in the 1960s, compiled lists of provisions in the federal tax code that "resemble spending." In a later publication, Surrey and Paul McDaniel described such provisions as "tax incentives or tax subsidies" that functionally are "departures from the normal tax structure and are designed to favor a particular industry, activity, or class of persons." Surrey and McDaniel described tax expenditures as representing "government spending" for specific activities or groups, "effected through the tax system rather than through direct grants, loans, or other forms of government assistance."

Why Focus on Tax Expenditures? As our office explained in 1983, "the 'tax expenditure' concept provides a systematic means for identifying those revenues foregone by the state for policy reasons." "Information on tax expenditures," we added, "allows the state to compare the 'costs' of these policy decisions with the results achieved by them." Over the last four decades, we have often advised the Legislature to increase its oversight and review of tax expenditures. At times, we have contrasted the relatively small amount of time spent considering most tax expenditures with the attention paid to typical spending programs by both the Legislature and the administration each year.

What Are Tax Expenditures? The term "tax expenditures" refers to tax exclusions, exemptions, preferential tax rates, credits, and other tax provisions that reduce the amount of revenue collected from the basic tax structure.

Why Are Tax Expenditures Put in Place? There are many reasons why tax expenditures are adopted, but the principal ones include:

An Example: California's Largest Tax Expenditure. Some of the largest tax expenditures are considered so central to the tax system that it is difficult for many to imagine a tax system without such exemptions, exclusions, or credits. Yet, these tax law provisions can still be considered ones that provide an exception from the state's basic tax structure, thereby qualifying as a tax expenditure under most definitions. Valued at over $5.5 billion per year, the state's exemption of most sales of food, candy, gum, confectioneries, snack foods, and bottled water from sales taxes is the largest single tax expenditure. (This sales tax exemption does not include hot prepared food and some other food items.) Under the state's basic tax system, such food would be taxed. Yet, there are two specific provisions of law that explicitly exempt these items from California's sales taxes: Article XIII, Section 34, of the State Constitution, and Section 6359 of the Revenue and Taxation Code. Similar food sales tax exemptions are in effect in many other states as well. 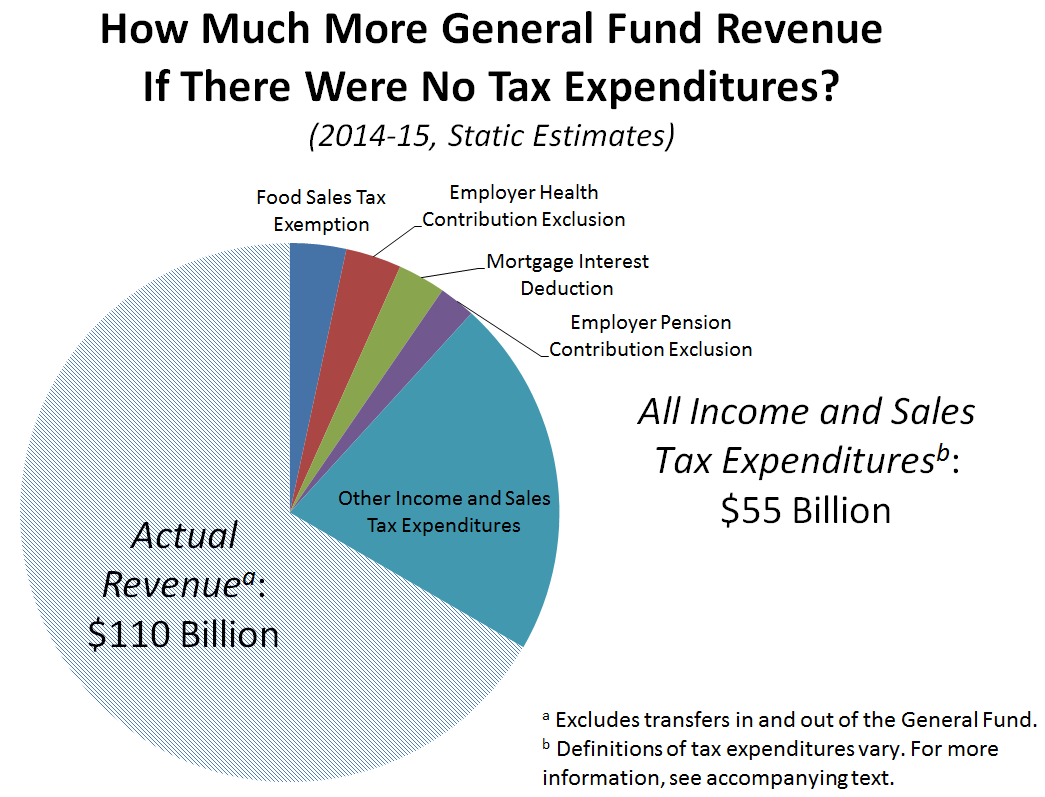 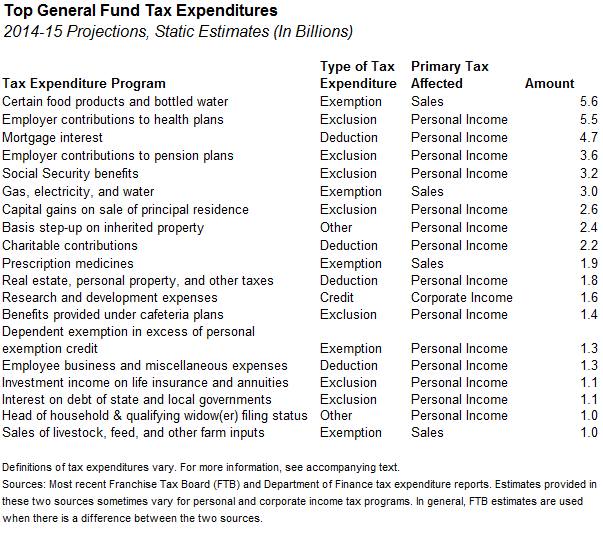 Static, Not Dynamic, Estimates. The estimates for the tax expenditures above generally are "static estimates" in the sense that they do not attempt to account for behavioral changes that would take place if the tax expenditures were repealed. Moreover, as FTB noted in a prior tax expenditure report, these estimates generally "do not consider any changes that might occur in the overall performance of the California economy if the tax expenditure were removed." Determining a "dynamic estimate" based on these types of behavioral and macroeconomic responses would be very difficult. California revenue calculations typically exclude such considerations, with some exceptions (such as the generally understood behavioral responses to changes in cigarette tax rates). In many cases, the behavioral and macroeconomic responses to a state tax policy change are unclear, but likely small. As our office's prior director of economics and taxation wrote in a 2006 paper, "dynamic state revenue models inherently face many data and specification problems which make their quantitative outputs subject to limitation, some debate, and very sensitive to their underlying assumptions."

Advantages and Disadvantages. Tax expenditures have several advantages as a means to achieve public policy goals. Tax expenditures often require only limited administrative effort by recipients and the state. They tend to work simply by enabling individuals and businesses to pay less tax than otherwise, and for the state, there is often no need to hire people and maintain equipment and facilities to oversee such a public program. By contrast, for a typical spending program, more staffing might be required to pay out funds to achieve the same public policy goal.

On the other hand, a negative aspect of many tax expenditures, compared to typical spending programs, is a weakening of legislative oversight and budgetary control. Often, once a tax expenditure is established, resources effectively are allocated to the tax credit, exclusion, or exemption automatically each year, without further legislative review. Typically, only a majority vote of the Legislature is required to establish a tax expenditure, but a two-thirds vote generally is required to scale back or eliminate ongoing tax expenditures if they are found to be ineffective or inefficient. Tax expenditures also sometimes raise enforcement issues, offering opportunities for tax evasion given the relatively low level of tax auditing the state undertakes.

Tax Expenditures Can Obscure Tax Incidence. Tax expenditures create exceptions to the basic tax structure. In so doing, they can make it difficult for policymakers to understand the effects of the taxes in law. California's corporate income tax, the corporation tax, is a good example of this. As we described in a response to the Senate Budget and Fiscal Review Committee last year, changes in tax credits and other tax law features have contributed to an "effective average tax rate" for corporations that is well below the main 8.84% statutory tax rate in law. The proliferation of special tax provisions for specific industries and groups means that different businesses pay vastly different effective tax rates on their income, such that it is difficult to easily summarize the effects of California's business tax structure on the economy. Our office has advised the Legislature to be selective in adopting tax expenditures, with a general goal of applying taxes like the corporation tax as broadly as possible across all taxpayers in the economy. Doing this will help the state keep tax rates as low as possible.

Inertia Can Be a Problem. Particularly for longstanding tax expenditures, it is very difficult to adopt changes that affect large segments of the state's population even if substantial problems exist with the tax policy. Large segments of the residential or business population may base their long-term financial planning on such tax expenditures remaining in place unchanged. For example, our 2007 review of the state's mortgage interest deduction found it to be "poorly designed...for achieving the policy goal of increasing the rate of homeownership" and noted that its benefits are skewed toward higher-income taxpayers, encouraging the purchase of large and expensive homes, with most benefits going to taxpayers who would own a home even if the deduction did not exist. While we offered various options to improve the mortgage interest deduction, it is understandable that the large portion of Californians benefiting from this tax provision would be concerned with potential changes to this benefit.

Very Difficult to Evaluate. Our knowledge about the effectiveness, cost efficiency, and fiscal effects of tax expenditures varies considerably. For some tax expenditures, reasonably good data exists regarding the extent of their use, such as for certain income tax programs that are claimed on tax returns. For other tax expenditures, hard data is more limited, including information about the distribution of their benefits among different categories of taxpayers. Analysis of alternative uses of public funds is difficult and often omitted entirely from tax expenditure studies. These studies also often rely on extensive and sometimes subjective assumptions, which, if changed, can produce very different results. Furthermore, measuring whether tax expenditures are effective and cost-efficient in achieving their objectives is made more difficult by problems in identifying their direct impacts and the uncertainty inherent about the behavioral effects they can produce.

Recent Best Practices. The state has made progress in overseeing its tax expenditure programs recently. In 2013, the Legislature passed a bill to phase out the prior enterprise zone program over several years and replace it with other tax expenditures. The subject of much debate, the bill, AB 93 (Committee on Budget), declared its intent to address several identified weaknesses of the prior program and to adopt new tax expenditures thought to be more effective. AB 93 was among a number of recent measures that imposed expiration dates on some new tax programs to provide a clear date for their review and possible modification in the future. Another such measure, which authorized expansion of California's film and television production tax credit (AB 1839 [Gatto] of 2014), was among the recent measures requiring future analyses related to the effectiveness of a tax expenditure program. Such programs will always be difficult to evaluate, but analyses of this type can prove helpful to future legislators in considering whether to continue, modify, or eliminate such a program.