How California's Economy Evolved Over the Last Business Cycle

The COVID-19 recession that began in March ended the longest economic expansion in the state’s history. With the expansion over, we examine how the state’s economy evolved from 2007 to early 2020 and how its experience differed from the rest of the country.

The first chart shows the number of jobs in ten broad sectors in the state at the end of the previous expansion in July 2007 and in February 2020. The education/health and leisure/hospitality sectors had the largest absolute gains over this period, followed by professional and technical services (including management of companies), transportation/warehousing/utilities, and other services which include administration, repair, personal services, and nonprofits. Total jobs in the state’s manufacturing, wholesale/retail trade, and financial sectors declined over this period. 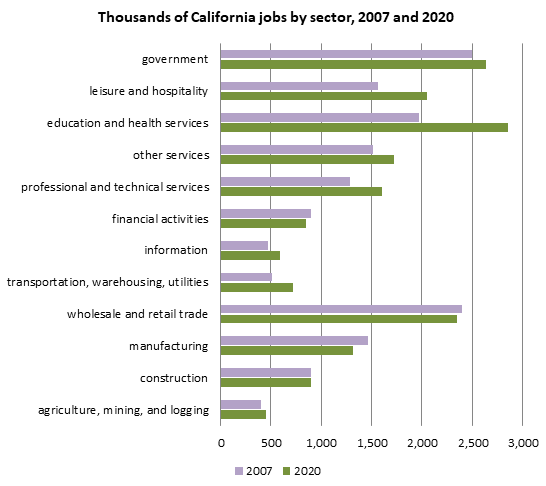 The next chart shows how California’s sectors compared to their counterparts in the rest of the nation between July 2007 and February 2020. The distance from the diagonal line shows the difference between the sector’s growth rate in the state and its growth in the rest of the country. Overall, California employment grew 13.5 percent over the cycle, slightly above the rest of the nation’s growth rate of 12.8 percent. The state’s information, health/education, leisure/hospitality, and transportation/warehousing/utilities sectors grew considerably faster than the same sectors in other states, while its manufacturing and finance sectors performed noticeably worse. The most striking result is in the information sector, which grew rapidly in California but declined more than any other sector in the rest of the country. 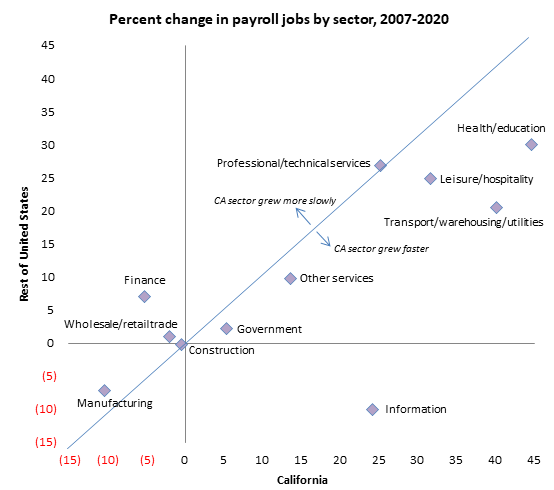 The next two charts follow the same format as the first two and examine the information sector in detail by breaking it down into its subsectors. While the information sector accounts for a fairly small share of California jobs, it has outsized importance because its jobs pay so well (average earnings of $191,000 in 2019 compared to the average of $66,000 in all sectors) and it produces services that can be sold all over the world. Jobs in the state’s software and data processing sectors more than doubled between July 2007 and February 2020, while jobs in ‘other information’ (mostly online publishing and web search portals) more than quadrupled. In contrast, the state’s telecommunications and publishing sectors shrank dramatically. 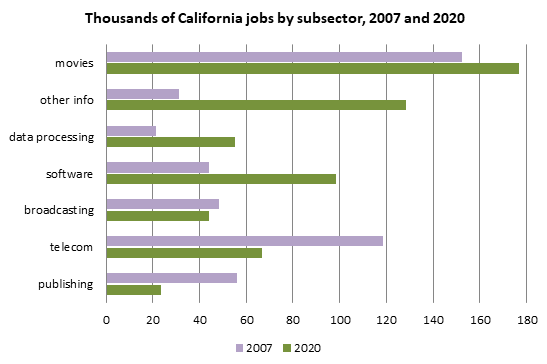 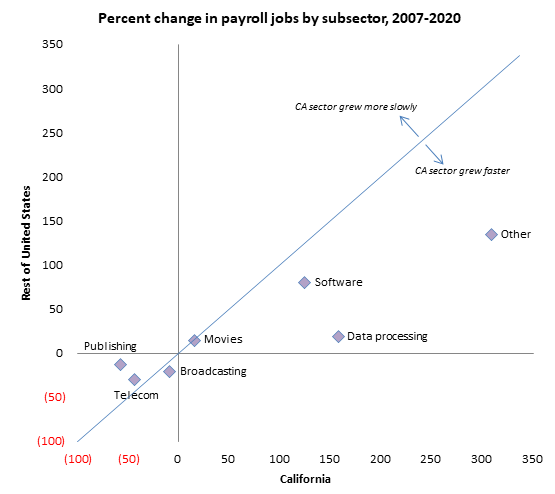 California’s relatively strong job growth from 2007 to early 2020 was driven to some extent by the extraordinary growth of its emerging information subsectors. The state’s fortunes over the next cycle will depend in part on whether these industries can maintain their rapid growth in the state in the face of a potential long-term shift to remote work.