California's Employment Development Department and the U.S. Bureau of Labor Statistics released California's April 2021 state jobs report today. Statewide nonfarm employment grew by an estimated 101,800 in April, the third straight month of six-digit growth. The official unemployment rate remained at 8.3 percent, well below the peak of 16.0 percent last April at the height of the lockdown but still well above the pre-pandemic level of 3.9 percent last February. The survey reflects job changes through the week of April 11 to April 17. California accounted for 38.3 percent of the national estimate of 266,000 net jobs gained in March, more than triple its 11.5 percent of the nation’s total payroll jobs as of February 2020.

The figure below shows how employment has evolved in both the state and the nation since the start of the pandemic. Overall employment in the state as of the middle of March was 8.0 percent below the level of February 2020, considerably worse than the national figure of 5.4 percent. Nearly half of this 2.6 percentage point gap is attributable to the leisure and hospitality sector which includes restaurants, bars, and hotels. California leisure/hospitality employment continued to rebound from the sharp drops in December and January, although it remains far more depressed than its national counterpart as the state has generally been slower to lift pandemic-related restrictions than other states have. 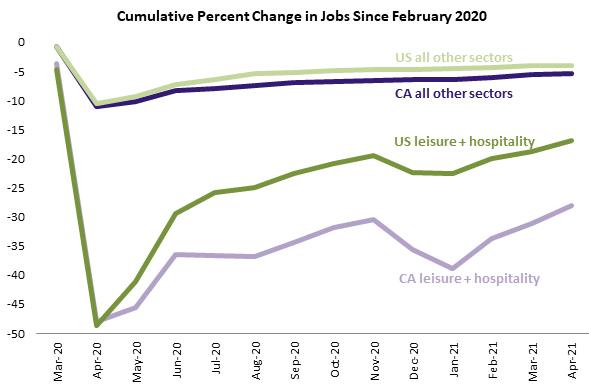 The next graph isolates aggregate employment in the other sectors and shows that it grew in California but fell nationwide in April. The gap between the state and national figures is the smallest since June. 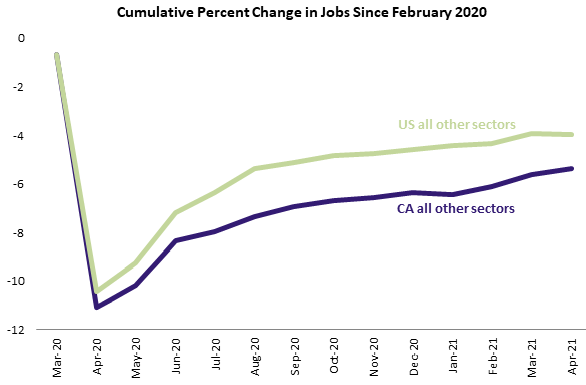 The next figure summarizes nonfarm employment by sector based on the monthly survey of employers. The leisure and hospitality sector discussed above accounted for more than half of the statewide net gain. The health, professional/technical, and other services sectors also had significant gains, and the administrative services and transport sectors avoided the losses that their national counterparts endured in April.