Over the last year, we often have been asked about how California's severe drought will affect the economy and state government tax revenues. Our short answer is this: while the drought is affecting many Californians and communities in different ways, we currently do not expect the drought to have a significant effect on statewide economic activity or state government revenues. A recent Wall Street Journal survey reportedly showed that the vast majority of economists agree that the economic effects of the drought will either be "too small to show up" in economic data or be "small but measurable in the data."

That being said, we acknowledge the drought as a risk factor for the state's economy, especially if its effects worsen or are prolonged. We will continue to monitor data and other researchers' analyses to try to understand how the drought is affecting California's economy and state and local tax revenues. (The drought also will continue to result in added state spending, such as wildland firefighting costs, but that added spending is not the focus of this post.)

Why a Limited Statewide Economic Impact?

Agriculture Is Small Share of State's Economy. As has been widely reported recently, a large portion of California's available water is used by its farms. California is the leading farm state, and significant additional changes in agriculture's use of water could affect that sector, potentially forcing farmers to fallow more fields or switch to different crops or livestock either temporarily or permanently. In some cases, such switches could be to lower-value crops or livestock, while in other instances, the switches could be to higher-value products. Local communities with economies heavily concentrated in particular aspects of agriculture could be heavily affected, and some communities already have been heavily affected. Nevertheless, agriculture directly generates only about 2 percent of the entire state's gross domestic product (GDP). With agriculture-related businesses (such as food-related manufacturing) added, agriculture's share of state GDP rises somewhat (to around 3 percent of GDP, a Bloomberg article recently estimated). Similarly, agriculture and related jobs combined probably make up between 3 percent and 4 percent of all jobs in the state. Even a substantial decline in agriculture's share of the economy, such as occurred during and after the 1976-77 drought, probably would have only a limited impact on the overall state economy. Real California GDP, for example, rose even during 1976 and 1977.

Residential Water Changes Notable, But Not Likely a Major Drag on Economy. On April 1, the Governor directed state departments to implement statewide mandatory water reductions. Among the Governor's directives were a 25 percent statewide decrease in cities and towns' water usage, restrictions on water usage by golf courses and other large landscapes, and a prohibition on sprinkler usage in new homes unless water-efficient drip irrigation is used. These are noticeable changes, but they seem unlikely in and of themselves to result in a significant drag on the state's economy. California homebuilders, for example, already are required to meet various water efficiency and other water requirements. The new requirements, if they are finalized and remain in place, seem likely to change landscaping and perhaps other aspects of residential and commercial construction in some communities. Still, homebuilding and other construction continues in the state, and there is no broad change in overall consumer spending or sentiment at this time resulting from the drought.

Drought Is An Economic Risk to Monitor 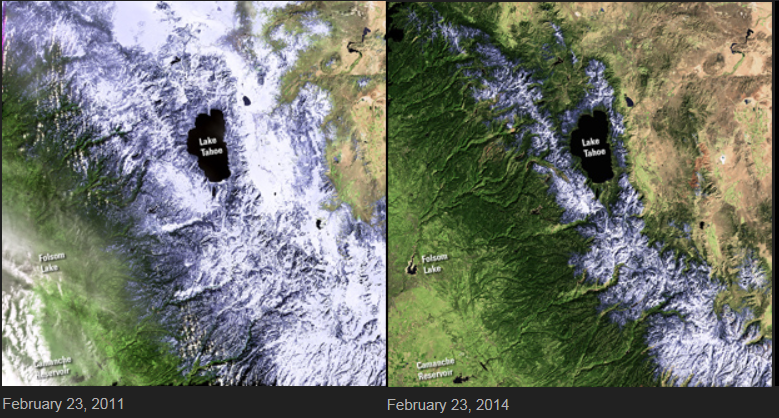 How Will California Agriculture Change? While agriculture makes up a relatively small portion of economic activity and jobs statewide, it is much more significant in communities in the Central Valley and some other parts of the state, many of which have higher unemployment and lower incomes than other parts of California. California's position as a leading farm state has always been a key economic advantage. According to the California Department of Food and Agriculture, California exports internationally around one-fourth of the farm commodities it produces (as measured by the weight of those commodities). The recent strong growth of California international farm exports—valued at $18 billion in 2012—has been associated with growing production of high-value crops like almonds, which are a significant export to both Asia and Europe. California also ships many agricultural products to other U.S. states. International and interstate exports, including agricultural sales, are important drivers of California's economic growth. If future changes in agricultural water usage (including, potentially, groundwater usage) result in less of this export activity, those changes may result in a drag on future economic growth and fewer jobs in various other sectors in communities with a significant agricultural presence. Any long-term changes in water use that significantly alter food prices also could be a concern for the broader economy.

How Will Water Changes Affect Homebuilding and Consumers? The changes ordered by the Governor in urban water rules will affect the economy. As with most economic changes, there will be economic "winners" as well as "losers" from such changes as businesses adapt to any changes in residential landscapes, water prices, and the like. For the overall state economy, it seems to us that the most important economic effects could be on homebuilding—already too slow to meet demand. If, hypothetically, the drought were to contribute to significant new restrictions on homebuilding and other construction, that could negatively affect construction employment, consumption, business expansion, and state and local revenues. Moreover, if the drought results in weakened consumer sentiment, that could negatively affect the economy and state and local revenues modestly—reducing, for example, consumer purchases of cars, appliances, etc.

Other Perspectives. Following the initial publication of this blog post, our commentary was discussed by Steve Levy (Center for Continuing Study of the California Economy) and the president of the California Farm Bureau in a story by Chris Megerian in the Los Angeles Times and by Kurt Schwabe of UC Riverside in a story by Jim Miller in The Sacramento Bee.

(Edited April 14 at 6 pm, in response to questions received. Edits amend links, clarify that crop switches resulting from changes in agricultural water usage could be to lower-value or higher-value crops depending on the circumstances, and list examples of consumer purchases that are affected when consumer sentiment weakens.)