The Franchise Tax Board and the State Board of Equalization now have provided their preliminary, updated monthly data for April personal income tax (PIT), corporation tax (CT), and sales and use tax (SUT) agency cash collections. (The preliminary monthly data for the PIT differs somewhat from the estimate we provided on our daily income tax tracker in April. Such end-of-month adjustments are common.) Collectively, the PIT, SUT, and CT are known as the "Big Three" General Fund state taxes.

Combined, the PIT, SUT, and CT were $1.9 billion above the administration's most recent projection for the month of April, as shown below. For the 2014-15 fiscal year to date, the Big Three taxes combined are $3.2 billion above projections. 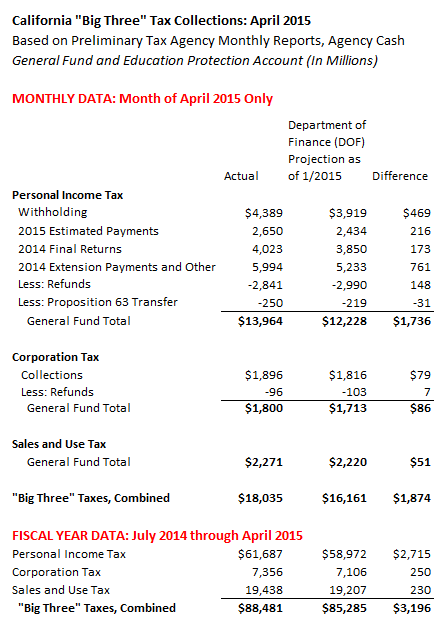 Income Taxes Primarily Responsible for April Revenue Gains. The PIT ended April over $1.7 billion above the most recent administration projections for the month, while CT ended April up $86 million from projections. PIT withholding was quite strong, up 15.3% over April 2014 levels. Payments on 2014 final returns were up 20.7% from last April, while 2014 extension payments exceeded $5 billion (up 23% from April 2014 levels). Much of the 2014 tax year revenue gains may result from capital gains, bonus, or option income, some of which may not recur in future years.

As shown above, for the 2014-15 fiscal year to date, the two income taxes are a combined $2.97 billion above the administration's most recent projections, and the SUT is $230 million above projections for 2014-15 to date. Another large round of income taxes will come into state coffers in June, immediately following the legislative deadline for passing an annual state budget.

Estimated Taxes Up 17% From Year Before: Strong, But Not Unprecedented. As we described on our daily tax tracker, June PIT collections are largely quarterly estimated payments by high-income taxpayers on 2015 income. Accordingly, the stronger the April estimated payment results, the stronger the prospects for June 2015 PIT collections. The FTB monthly data shows that estimated tax payments totaled $2.65 billion during April 2015, which was up $387 million (17.1%) from April 2014. This is good growth, likely related to the reasonably healthy stock market, but the growth is not unprecedented. In April 2006, for instance, PIT estimated payments were up 23.5% from the year before, and in April 2013, estimated payments were up 26.6%. The administration currently projects that June 2015 estimated payments will fall by 4.7% below June 2014 levels. If, however, June 2015 estimated payments were up by the same 17.1% we saw in April, this would be $1.2 billion above the current administration projections. PIT withholding and other revenues could add a few hundred million more dollars to the totals based on recent trends. Finally, as noted on our daily tax tracker, complex accrual changes then will adjust 2014-15 revenues up or down by hundreds of millions of dollars or more.

LAO Bottom Line. The precise bottom line of the state's 2015-16 budget plan now must await the May Revision. Both the administration and our office will release new revenue and budget projections in mid-May. Combined, 2012-13, 2013-14, 2014-15, and 2015-16 state revenue projections, all of which are likely to be adjusted, will almost certainly be billions of dollars above the administration's January projections. As we discussed in our April 7 budget scenarios report, schools and community colleges likely will receive a very large portion of the newly identified budget revenues. The precise interplay between 2013-14, 2014-15, and 2015-16 budgetary revenues, Proposition 98, and Proposition 2 will determine whether any additional resources are available for budget reserves in excess of requirements, additional debt payments, or added program spending. If any such additional resources are available (which is not a certainty), these additional amounts could be small.