Second Largest Pension System in U.S.  Established in 1913, CalSTRS administers retirement programs for about 880,000 members—equivalent to about 2 percent of California’s population. CalSTRS members are current, former, and retired teachers and administrators, as well as their beneficiaries. CalSTRS members mainly work at school and community college districts. In this series, we refer to CalSTRS members as “teachers” for simplicity.

Full Funding a Key Goal of Pension Policy. A pension system is fully funded when assets are sufficient to cover benefits already earned by employees and retirees. Aiming to keep a pension system fully funded is crucial to reducing long-term pension costs. This is because a larger investment portfolio allows a greater share of future benefits to be paid with investment returns rather than contributions from governments. In addition, aiming for anything less than 100 percent full funding shifts “unfunded liabilities” to future generations. We have long stressed the importance of funding benefits for public workers during those workers’ careers rather than shifting those costs to future taxpayers.

CalSTRS Faces Large Unfunded Liabilities. As shown in Figure 1, CalSTRS has been less than fully funded for most of its 103-year history. That is, the assets held by the fund at any one time have been insufficient to cover benefits earned to that date. As of the most recent estimates, CalSTRS would need an additional $72.7 billion in its investment fund to pay for teacher pension benefits earned as of the end of 2013-14. This shortfall is referred to as an unfunded liability. Since the late-1990s, when CalSTRS was estimated to be fully funded, its funding situation has worsened due mainly to three factors: 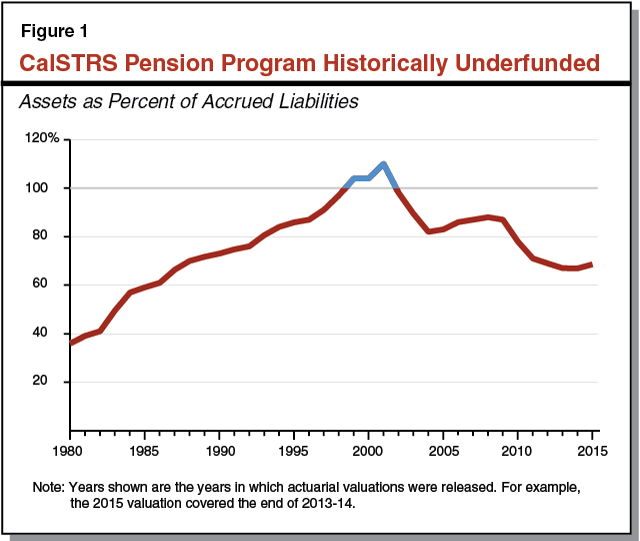 2014-15 Budget Package Included Plan to Fully Fund CalSTRS. Resolution Chapter 123, Statutes of 2012 (SCR 105, Negrete McLeod): (1) declared the intent of the Legislature to address CalSTRS’ long-term funding needs and (2) encouraged CalSTRS to develop options to address those needs. In February 2013, CalSTRS submitted a report to the Legislature detailing eight options for addressing the CalSTRS unfunded liability. That report stressed one “definitive approach”—fully funding CalSTRS’ main pension program over a period of 30 years or less. The Legislature held hearings in 2013 and 2014 that evaluated CalSTRS’ and other options and examined the effects on stakeholders. The Governor’s May 2014 revised budget proposed a plan to fully fund CalSTRS in about 30 years by increasing contributions from the state, districts, and teachers. The final 2014-15 budget package adopted the Governor’s proposal, with some minor modifications.

Funding Plan a Major State Accomplishment. Prior to state action, CalSTRS faced a huge unfunded liability with no plan in place for funding teacher pensions. CalSTRS was expected to exhaust its assets in the mid-2040s, an alarming prospect for a pension system. The funding plan aims to fully fund CalSTRS over the same period. Figure 2 compares CalSTRS’ projections of funding before and after the funding plan. While fully funding CalSTRS will mean that taxpayers and teachers will contribute billions more in the next few decades, the plan will lower longer-term costs and put CalSTRS on a sustainable path. While we critique various aspects of the plan’s implementation in this series, we continue to regard the funding plan as a major state accomplishment. 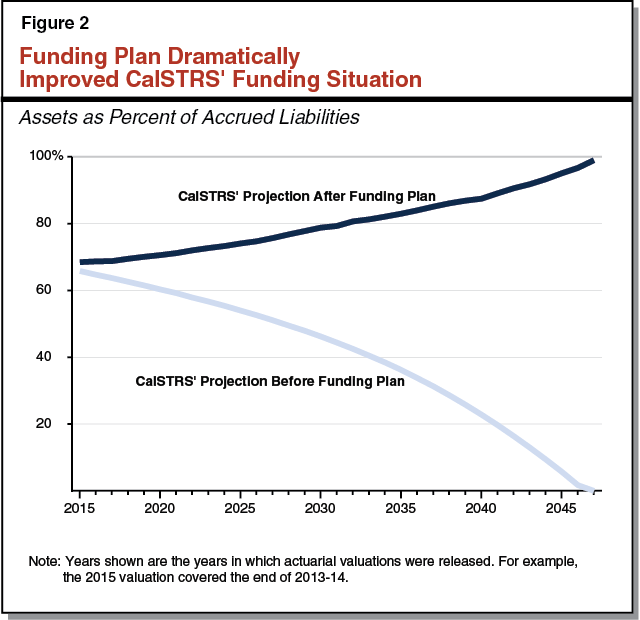