This post is the third in a series looking at the implementation of the CalSTRS funding plan. Below, we describe how the abstract calculation upon which the funding plan is based has increased the district share of CalSTRS’ unfunded liabilities while decreasing the state share. We note that district contribution rates are fixed in law through 2020-21, making this a longer-term issue for districts. We also note that—as the plan has been implemented—responsibility for CalSTRS’ unfunded liabilities will continue to shift between the state and districts, depending upon future investment returns and other factors.

District Share of Unfunded Liability Has Increased From $47B to $58B. Figure 1 shows how responsibility for CalSTRS’ unfunded liabilities has changed since the Legislature passed the CalSTRS funding plan. During the legislative debate, administration documents characterized the cost sharing as follows: districts would pay $47 billion, the state would pay $20 billion, and teachers would pay about $8 billion. As of the most recent actuarial valuation, the district share has increased by $11 billion from that initial estimate while the state share has decreased by $5 billion. These changes have occurred despite no significant change in CalSTRS’ funding situation. As we describe below, about $4 billion of the increase in the district share is mostly explained by the state benefitting from theoretical investment gains that do not exist in the real world. As we describe in our fourth post, the remaining roughly $8 billion increase in the district share is explained by CalSTRS’ treatment of the higher teacher contributions that were required by the funding plan. 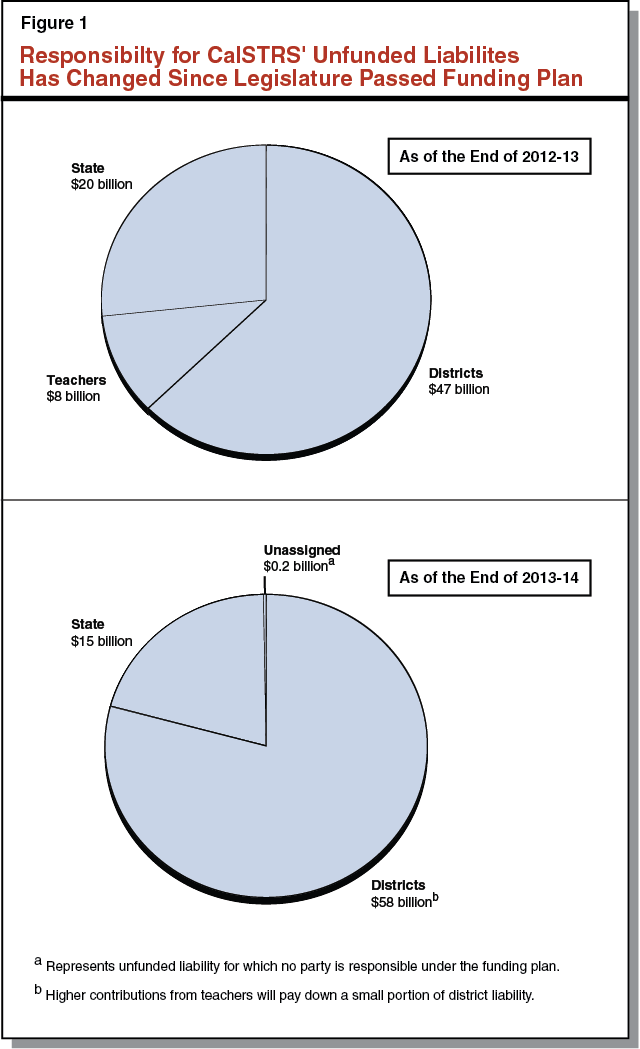 Under Funding Plan’s Central Calculation, State Benefits From Theoretical Assets. As described in our second post, the state’s share of CalSTRS’ unfunded liabilities is based on an estimate of what CalSTRS’ funding shortfall would be today if the state made different decisions about teacher pensions in the past. Specifically, the calculation estimates what CalSTRS’ unfunded liabilities would be now if (1) teachers earned less generous pension benefits and (2) the state and teachers had contributed more to CalSTRS’ main pension fund. Had less generous benefits been paid to members and had more contributions been made to the investment fund, CalSTRS would have had more assets. The calculation tries to capture these effects. That is, the calculation reflects a fictional investment portfolio that has more assets than CalSTRS’ real world portfolio. This is important because when CalSTRS records investment gains in the real world, the calculation gives the state the benefit of additional, theoretical gains off the fictional portion of the investment portfolio. For example, if CalSTRS’ real world portfolio grows by $10 billion, the calculation gives the state the benefit of a roughly $12 billion gain.

As We Initially Understood Plan, Responsibility for CalSTRS Would Not Have Shifted to Districts. As we initially understood the funding plan in 2014, the state and districts would share in investment gains and losses in proportion to the amounts they owe. In other words, when CalSTRS records a large investment gain, we thought most of the gain would be used to reduce the district share of unfunded liabilities with the rest reducing the state share by a lesser amount. If this simpler approach had been implemented, both the district and state shares would have decreased slightly, but proportionally they would have had roughly the same responsibility for CalSTRS’ unfunded liabilities.