This post is the seventh in a series looking at the implementation of the CalSTRS funding plan. Below, we describe how a recent CalSTRS policy change increases projected district rates under many scenarios. We note that district contribution rates are fixed in law through 2020-21, making this a longer-term issue for districts.

Contribution Rates Under Bad Investment Scenarios. In the June 2015 meeting of the CalSTRS board, CalSTRS’ consulting actuary explained how—under the calculation used to implement the funding law—district contribution rates would tend to decrease even under bad investment scenarios. This counterintuitive result was the byproduct of the abstract calculation central to the funding plan. Figure 1 illustrates district contributions under scenarios in which investment returns consistently fall far short of investment returns. As shown in the figure, the state rate could be expected to increase steadily through the period in response to bad investment returns, but district rates would not change significantly. 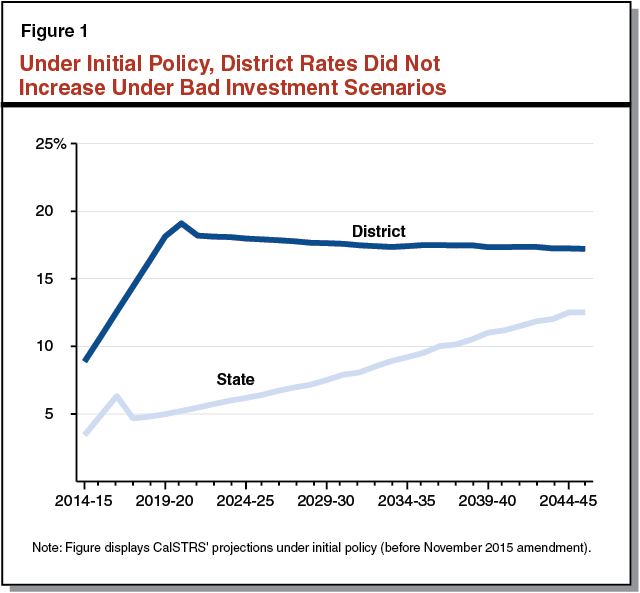 CalSTRS Unable to Require State to Pay Its Share Under Bad Investment Scenarios. CalSTRS’ consulting actuaries found that under these bad investment scenarios, the funding plan would fall far short of its key goal of full funding. But the key issue was not necessarily with the district contribution. Because the funding plan’s key calculation makes the district share relatively insensitive to changes in assets, the bulk of added unfunded liabilities under this scenario would instead be assigned to the state. Rather, the key problem was that—under these scenarios—the law does not allow state contributions to increase sufficiently to pay down the state's share of CalSTRS’ unfunded liabilities.

Recent Policy Increases District Contributions Under Many Scenarios. Having identified this problem, CalSTRS amended its policy in November 2015 to require increases in the district contribution when state contributions are insufficient to pay for the state share of unfunded liabilities. Figure 2 illustrates how under bad investment scenarios, district rates under the new policy will be higher than if CalSTRS had not made this change. While the law can be read to require increases in the district rate in these scenarios, an alternative for legislative consideration would be granting CalSTRS additional rate adjustment authority to allow state rates to increase sufficiently to pay for whatever is considered to be the state’s share of unfunded liabilities. 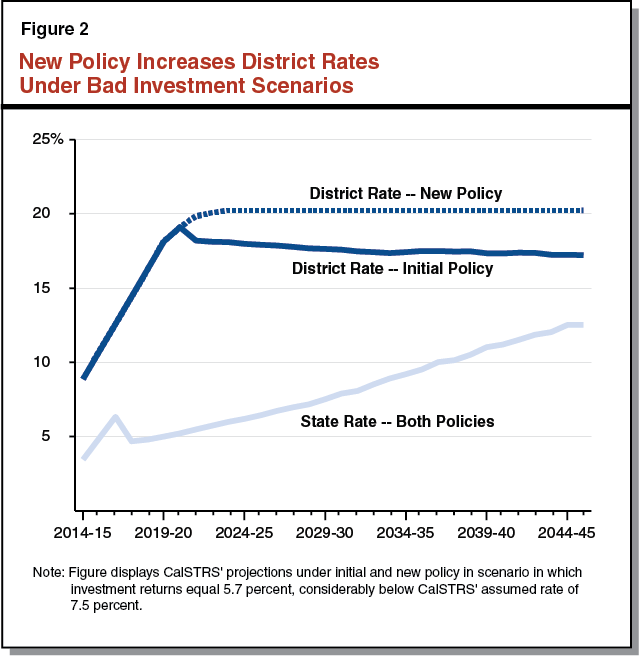