This post is the fifth in a series looking at the implementation of the CalSTRS funding plan. Below, we describe how the state’s share of CalSTRS’ unfunded liabilities will be more sensitive to investment gains and losses than the district share. This makes the state’s future responsibility for CalSTRS relatively uncertain. 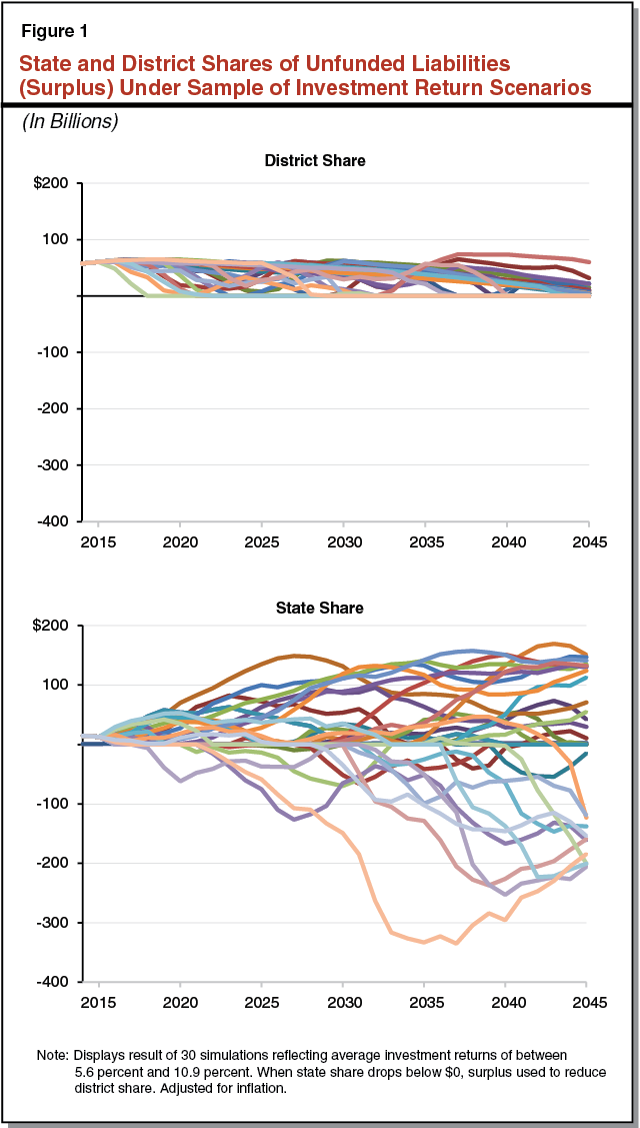 State’s Future Responsibility for CalSTRS Relatively Uncertain. The range of outcomes under these simulations illustrate the future uncertainty of the state’s responsibility for CalSTRS. In some scenarios, CalSTRS records large investment gains in the near term that eliminate the state’s share of the unfunded liability. Accordingly, in these scenarios the state’s funding plan contribution drops to zero through the mid-2040s. (The state would continue to make other contributions to CalSTRS that are not determined by the funding plan’s central calculation.) In other scenarios, investments underperform assumptions and the state’s share of the unfunded liability—along with its funding plan contribution rate—increases steadily each year. In these scenarios, state contributions reach about 18 percent of payroll by the mid-2040s. In the context of current statewide teacher payroll, the difference between these two extremes is roughly $5 billion—more than three times the state’s current contribution to CalSTRS’ main pension program. We note that the state’s share of CalSTRS’ unfunded liability would be higher than reflected in the figure if CalSTRS lowers its assumption concerning future investment returns.

District Responsibility for CalSTRS Relatively Certain. As the figure indicates, the district share of the unfunded liability will be more stable. In addition, the law sets a floor and ceiling for district rates—8.25 percent and 20.25 percent, respectively. These factors make future district costs more certain than state costs.