As part of the May Revision, the Governor has proposed to implement an earned income tax credit (EITC) that would increase the after-tax income of low-income workers. The proposed EITC is similar to Option 2 that we presented in our December 2014 report—Options for a State Earned Income Tax Credit. This analysis describes the Governor’s proposed state EITC and provides our high-level comments on the proposal. (For a more detailed background on the federal EITC and considerations for structuring a state EITC, please see our December report.) 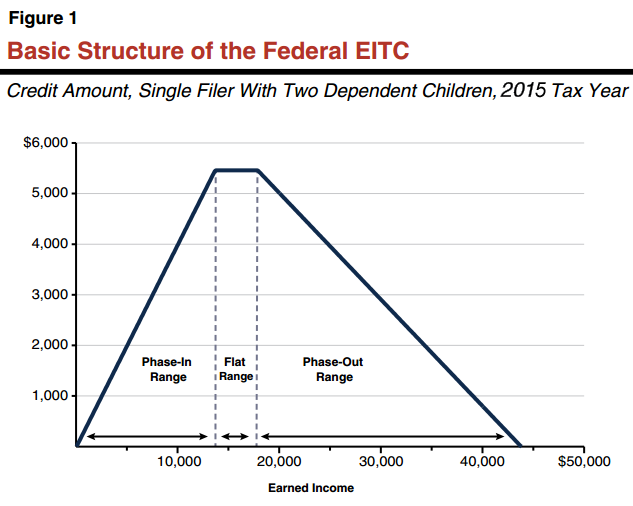 Some States Provide Credits to Supplement Federal EITC. As of 2014, 25 states and the District of Columbia had EITC provisions in their own income tax laws. In general, these state EITCs “piggyback” on the federal EITC by simply matching a fixed percentage of the federal credit amount, such that all individuals who qualify for the federal EITC also qualify for the state EITC. The matching percentages vary widely, with some states matching less than 5 percent of the federal credit, while others match up to 40 percent. Most, but not all, state EITCs are refundable. In the past, the Legislature has considered several measures to establish a state EITC in California, but none have been approved.

Overview of the Governor’s Proposal

Focuses on Working Families With the Lowest Incomes. The federal EITC is available over a wide range of earnings, such that individuals with annual incomes of up to roughly $44,000 may claim the federal EITC (for a single filer with two qualifying dependents). As shown in Figure 2, the eligibility cutoff for the Governor’s proposed state EITC would be much lower—around $14,000. As a result, the proposed EITC would be limited to a much smaller population—those with the very lowest earnings. 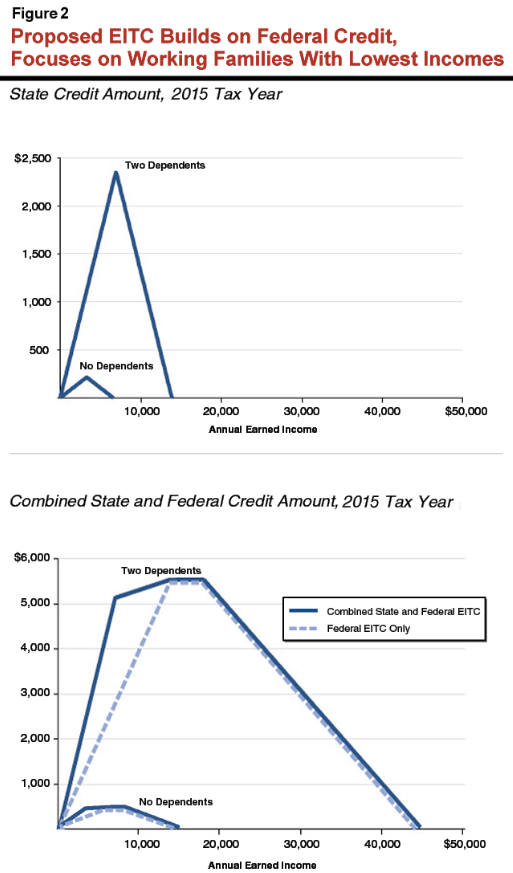 Under the Governor’s proposal, the credit’s structure would match a percentage of the federal EITC up to a maximum and then immediately begin to phase out at the same rate that it phased in, until the credit amount reaches zero. Figure 3 displays, for various household sizes, the maximum proposed state credit amount, the earnings levels at which this maximum credit could be claimed, and the earnings levels above which the credit could no longer be claimed. By focusing on families with the lowest incomes, the Governor’s proposal allows this smaller population to receive a more substantial benefit, in some cases significantly increasing eligible households’ resources.

Emphasizes Targeting Resources Over Strengthening Broad Incentives for Full-Time Work. The federal EITC encourages work by providing a growing credit amount for higher levels of earnings (over the phase-in range). The Governor’s proposed state credit magnifies incentives to move from no work to part-time work. However, because the state credit has a relatively low earnings ceiling for eligibility, it would not increase incentives to move to full-time work—a full-time worker in a minimum wage job would earn too much over a full year to qualify. We note that, consistent with Option 2 that we presented in our December report, the earnings level at which the proposed state credit completely phases out corresponds to the end of the phase-in range for the federal EITC. In this way, eligibility for the proposed state EITC would end at just the income at which the maximum federal EITC benefit is reached. This ensures that there are no income levels over the phase-in range where the combined federal and state credits decrease, avoiding disincentives for greater work participation.

Excludes Self-Employment Income to Limit Improper Payment Concerns. Earned income basically consists of wage and salary income (as paid by an employer) and self-employment income. Conceptually, there would seem to be no policy reason to distinguish between the two types of income. There are, however, some practical administrative reasons in so doing. For example, the federal EITC has historically had a high level of improper payments to individuals who claimed a larger credit than for which they were eligible. A significant source of improper payments is misreported self-employment income, which is difficult to independently verify. In our December report, we noted that the Legislature could consider limited a state EITC to wage income as a way to limit improper payment concerns. Consistent with this option, the Governor’s proposal would limit the income that can be used to determine the credit amount to wages that are subject to withholding. We are not aware of any other state that has chosen to exclude self-employment income in this way.

Amount of Credit Would Be Set Through Annual Budget Act. As described above, over the range of earnings for which the proposed state credit would increase with earnings, it would match a specified percentage of the federal EITC. This percentage—85 percent in 2015—effectively determines the amount of state credit that eligible filers would receive at any given level of earnings. The Governor has proposed statutory language that would specify that the amount of the matching percentage, known as the “adjustment factor,” be set in the annual budget act, and would be set to zero (no credit provided) if the budget act does not specify an amount. This means that the amount of the credit could change from year to year. However, the May Revision assumes that the adjustment factor would remain constant at 85 percent at least through 2018-19. (The administration's proposed budget bill language is on pages 3-5 of this pdf file under Budget Bill item 7730-001-0001 for the Franchise Tax Board [FTB].)

Estimated Total Cost of Roughly $400 Million. The proposed state credit would be available beginning in the 2015 tax year, meaning that personal income tax (PIT) filers could claim the credit beginning in early 2016. The administration estimates that the proposed state EITC would be claimed by 2 million individuals on 825,000 tax returns, with an average credit amount of $460 per return. The state credit, as proposed in the May Revision, is estimated to reduce PIT revenues by about $380 million annually.

The Governor’s May Revision additionally proposes $22 million and 98 positions—of these, 24 position-equivalents of temporary help—for the Franchise Tax Board (FTB) to implement and administer the refundable EITC program. Of that total amount, the administration proposes to spend about $600,000 for education and public outreach. About half of the total amount is for one-time implementation costs. The Governor’s May Revision assumes ongoing state operations costs to administer the proposed state EITC would decline in later years, to $10.1 million annually. (We also discuss these FTB budget issues briefly in a separate item on our website.)

Proposal Merits Serious Consideration. As we noted in our December report on state EITC options, the federal EITC is among the most significant federal antipoverty programs. It reduces poverty and generally encourages work, particularly among low-wage and low-skilled single parents. While the Governor’s proposed state EITC differs from the federal EITC in substantive ways, we believe it could benefit many of the state’s lowest-income residents. However, the state’s robust revenue position is subject to rapid reversal, and we advise caution as the Legislature considers this and other fiscal commitments. Below, we provide several comments on various aspects of the Governor’s proposal and raise issues for the Legislature to consider as it examines the proposal in light of its other priorities.

Proposal’s Estimated Total Costs Are Uncertain, But Appear Reasonable. Because the Governor’s proposed state EITC is focused on very low income households who in some cases are not required to file a state income tax return, there is less information available to inform estimates of the proposal’s costs. However, we think the administration’s estimate is generally reasonable. Should the proposal be approved, costs would likely vary somewhat over time in ways that are difficult to predict because of such factors as increasing awareness and take-up of the credit, changing economic conditions, and any future policy changes to the federal EITC (as the proposed state EITC is statutorily linked to the federal EITC). We note that the President’s recent executive actions to grant deferred action to certain undocumented individuals, should they be implemented, could potentially affect costs associated with the proposed state EITC, as individuals who are granted deferred action may become eligible for the EITC. However, as we have written elsewhere, we believe that the implementation of the President's executive actions is subject to significant uncertainty and would not recommend making an adjustment to the administration's cost estimate for the proposed state EITC at this time.

Potential Effects on Proposition 98. The administration generally controls the state's budgetary accounting protocols under state law. In the May Revision, the administration accounts for the estimated $380 million revenue loss from the proposed EITC as a reduction to PIT revenues. By reducing General Fund tax revenues, the EITC reduces the revenue base upon which key Proposition 98 school funding calculations are made. In many years, therefore, the EITC could reduce Proposition 98 funding for schools and community colleges to some extent. 2015-16, however, may not be such a year. Under the May Revision revenue and budget estimates, it appears that certain features of the Proposition 98 calculations cause the reduced EITC revenue to have no effect on the school funding guarantee in 2015-16. To the extent that 2015-16 revenue and other budget estimates change next year, Proposition 98 could share in the reduction to state revenue caused by the EITC. If the Legislature wished to have the EITC accounted for in such a manner as to reduce any Proposition 98 impacts, it would need to take a specific action to that effect.

Comments on Proposed State Operations Funding. In general, we think the resources proposed for FTB to implement and administer the state EITC are reasonable. However, we expect that the amount of funding needed could be somewhat affected should the Legislature modify the Governor’s proposal to reflect its own priorities. In particular, the amount of funding proposed for education and public outreach may be insufficient to adequately inform the potentially eligible population, as the Internal Revenue Service estimates that roughly 25 percent of filers that were eligible for the federal EITC did not claim it in 2012.  We suggest that the Legislature weigh the benefits and costs taking actions to increase education and public outreach through the proposed credit’s implementation.

Several Trade-offs Inherent in Governor’s Proposal. The Governor’s proposal reflects several policy choices made by weighing various trade-offs. The Legislature may wish to consider these trade-offs in light of its own priorities.