What Are Tax Expenditures?

Tax Provisions Intended to Accomplish A Public Policy Goal. Tax expenditures are provisions of tax law that enable targeted groups to reduce their taxes relative to the “basic” tax structure. As our office explained in 1983, the primary reasons tax expenditures are adopted are either to encourage certain types of behavior or to provide financial assistance to certain taxpayers. For example, the state has sales tax exemptions intended to encourage businesses to purchase certain types of manufacturing equipment. Tax expenditure provisions also can include exemptions, special deductions, preferential tax rates, and tax credits. See this detailed post written by our office in 2015 for additional background information about tax expenditures. 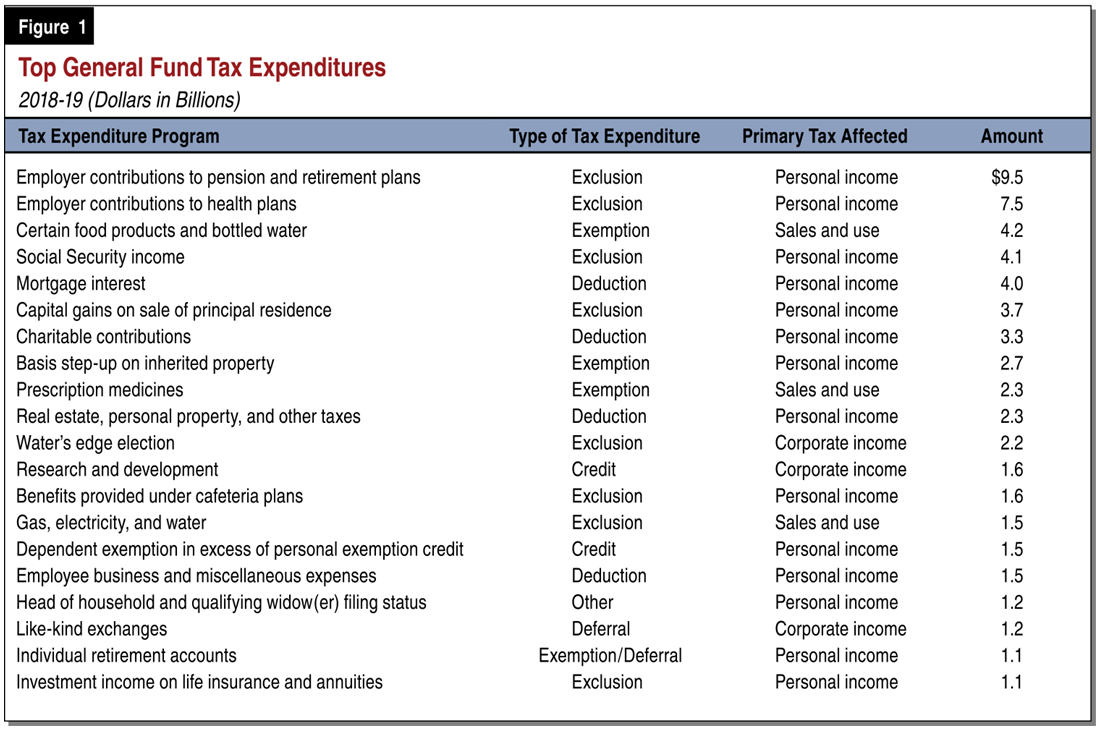 Compared to Other State Expenditures, Most Tax Expenditures Not Routinely Reviewed. Unlike direct expenditure programs, tax expenditures are not reviewed and funded during the course of the annual state budget process. Most tax expenditures are long-standing provisions in state law that provide large benefits to some taxpayers. For example, the PIT provisions that exclude employer contributions to health insurance plans and qualified retirement plans from the definition of taxable income have been in state law since at least 1983. These provisions respectively cost an estimated $7.5 billion and $9.5 billion annually, but they are not routinely reviewed and they have no sunset date.

Some Tax Expenditures Have Greater Oversight. The Legislature subjects some tax expenditures to greater oversight. For example, the film and television production and California Competes tax credits have annual allocation limits and public disclosure requirements. Moreover, these provisions also have sunset dates so that the Legislature can periodically weigh the costs and benefits of these tax expenditures against other Legislative priorities.

State Tax Agencies Provide Some Information About Tax Expenditures. In addition to the DOF reports mentioned above, the state tax agencies—the Franchise Tax Board, Board of Equalization, Department of Tax and Fee Administration, and the Employment Development Department—also describe and report statistical data on tax expenditures. 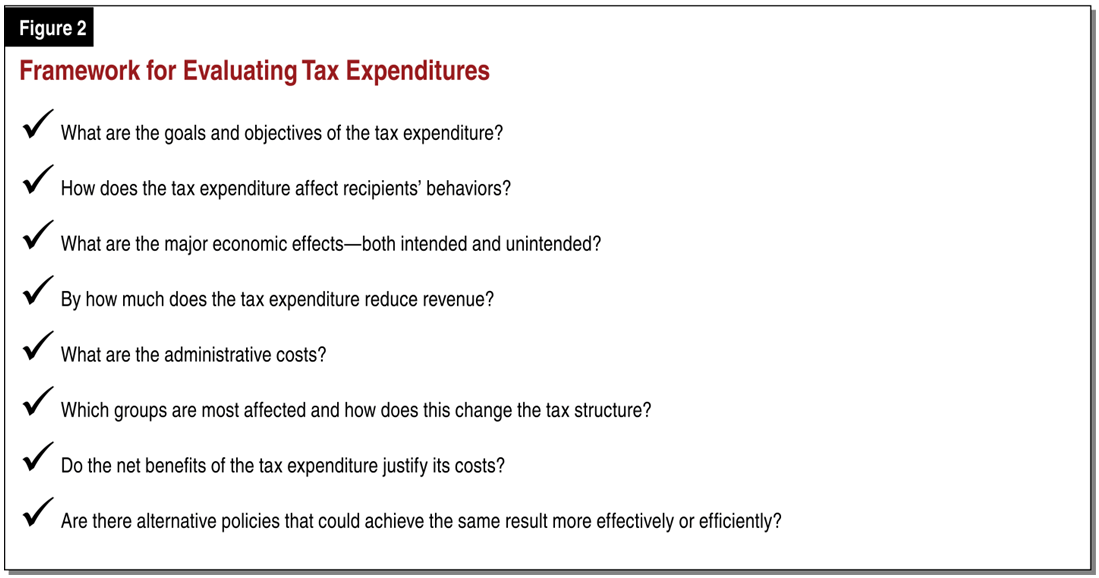 What Is the Goal? Understanding what a tax expenditure is intended to achieve helps to frame the evaluation of its effectiveness. The Legislature clearly states the intent of some tax expenditures in the enacting legislation. For example, the stated intent of the California Competes tax credit is to “attract and retain high-value employers in the state.” In other cases, the intended goal may be less clear. When tax expenditure legislation lacks clear intent language, determining the primary goal may be more difficult. For example, some may see the goal of the exclusion for employer contributions to health insurance plans as increasing health insurance coverage, while others may see the goal as increasing the after-tax income of certain workers. Identifying these goals—and the intermediate objectives towards achieving them—is the first step in evaluating whether the tax expenditure is meeting its intended purpose.

What Are the Economic and Behavioral Effects? A tax expenditure provides a financial benefit to the tax filer for taking a specified action—such as saving money for retirement—or having a specified characteristic—such as being blind. The financial benefit increases the filer’s after-tax income and may change his or her behavior in various ways—both intended and unintended. For example, the mortgage interest deduction is intended to encourage homeownership by reducing the cost of owning a home. However, evidence suggests that the provision has instead promoted the purchase of larger and more expensive homes.

Identifying and estimating a tax expenditure’s major effects—both intended and otherwise—is necessary to evaluate whether it is meeting its goals and whether its benefits justify its costs. Some tax expenditures are relatively well understood in this regard. For example, extensive academic research and the availability of relatively good household income and labor market data allows us to estimate the likely effects of the state Earned Income Tax Credit (EITC) with a relatively high degree of confidence: the EITC reduces poverty, increases labor force participation, and has other positive outcomes as well. At the same time, the EITC has some negative economic effects, such as reducing wages. More often, however, it is difficult to estimate the economic and behavioral effects of tax expenditures. There are several reasons for this, including data limitations, uncertain behavioral effects, indirect economic effects, and opportunity costs. We discuss these challenges in more detail below.

Despite these challenges and limitations, tax expenditure evaluations generally are worthwhile. These evaluations should describe and estimate the policy’s effects as clearly and accurately as possible, while acknowledging costs and benefits that are uncertain. An evaluation that only includes those effects that are best understood or most easily measured may be misleading.

What Are the Fiscal Effects? In addition to the net economic and behavioral effects, tax expenditure evaluations also weigh the fiscal costs. Tax expenditures have two types of direct fiscal costs: revenue losses and administrative costs.

How Does the Tax Expenditure Change the Tax Structure? Tax expenditures may have significant effects on the structure of the tax system. Policymakers often are interested in how a tax expenditure changes the amount of tax paid by some groups relative to others. There generally are two ways to think about the tax structure in this context: “horizontal equity” and “progressivity.”

Is the Current Tax Expenditure the Best Way to Achieve the Goal? In considering the objectives of the tax expenditure, an evaluator should consider whether there are alternative policies that could achieve the same result more transparently, effectively, or efficiently. For example, the federal government provides an income tax credit to buyers of electric cars, but the state provides a cash subsidy instead. On one hand, tax expenditures can be relatively inexpensive to administer and can help achieve policy goals by influencing behavior. On the other hand, alternative policies sometimes can achieve comparable outcomes in a more targeted or less costly fashion.

Evaluating and estimating fiscal and economic effects of tax expenditures is often difficult but generally worthwhile. In principle, the best way to judge the effectiveness of a tax expenditure and to decide whether to continue providing it is to consider whether the benefits justify the costs. A direct quantitative comparison of benefits to costs faces two major challenges. First, the effects of the tax expenditure can be quite uncertain. Second, there often is no consensus about the relative value of each cost and benefit. Despite these challenges, an effective evaluation can provide valuable information about the intended and unintended effects of the policy. A comprehensive tax expenditure evaluation describes and estimates the effects as clearly and accurately as possible, while acknowledging costs and benefits that are uncertain. This information helps policymakers decide whether the tax expenditure should be continued or whether an alternative policy might be more effective or advantageous.

The 2019-20 May Revision: Sales Tax Exemptions for Diapers and Menstrual Products, May 2019

Evaluation of a Sales Tax Exemption for Certain Manufacturers, December 2018

An Overview of California’s Research and Development Credit, November 2003