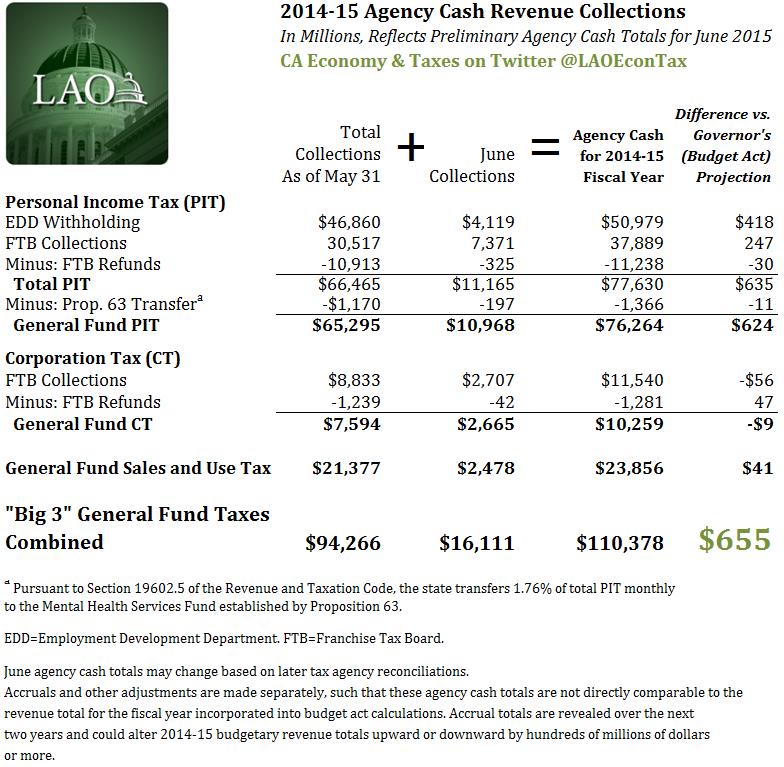 Collections of "Big Three" General Fund Taxes: $655 Million Above Governor's Budget Projections. As shown above, agency cash collections of the state's three major General Fund taxes—the personal income tax (PIT), the corporation tax (CT), and the sales and use tax (SUT)—ended 2014-15 at $655 million above the Governor's May 2015 revenue projections, according to preliminary state tax agency data. The Governor's revenue projections were incorporated into the "Budget Bill Jr." that he signed into law on June 24, 2015.

Other Tax and Revenue Collections Discussed in Separate Post. June totals for unclaimed property revenues, insurance taxes, and other revenue sources became available after this blog post was completed and are discussed in a separate blog post here.

Accruals Not Yet Reflected, But Will Affect 2014-15 Budgetary Revenue Totals. The state adjusts agency cash revenue collections, especially those related to the two income taxes, to reflect its highly complex system of revenue accruals. Revenue accrual amounts will not emerge with much certainty until one or two years from now. Those accruals could cause the income tax amounts for 2014-15 to rise or fall by potentially $1 billion or more. In the end (a) the agency cash amounts shown above plus or minus (b) accruals and related adjustments will equal (c) the total amount of revenue booked to the fiscal year for budget purposes (budgetary revenue).

2015-16 Revenues Seem Likely to Exceed Governor's Projections. As discussed above, it is not simple to translate the agency cash totals above to budgetary revenue totals for the 2014-15 fiscal year.