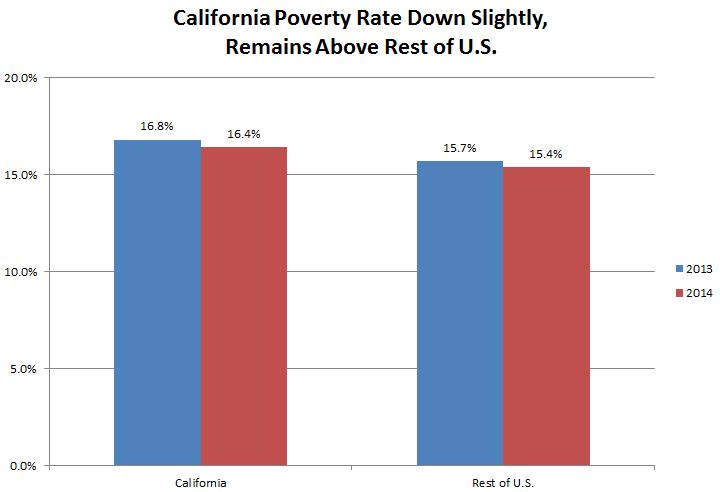 California’s Official Poverty Rate Down Slightly, Remains Above Rest of U.S. Last week, the U.S. Census Bureau released updated poverty statistics for states indicating that 16.4 percent of Californians—more than 6 million people—were poor in 2014. This poverty rate is down slightly from the 2013 rate of 16.8 percent, but remains higher than in the rest of the U.S. California was one of 12 states with a declining poverty rate from 2013 to 2014, the Census Bureau said.

Official Poverty Rate Methodology. The Census Bureau’s methodology for determining official poverty rates involves determining whether a household’s pretax cash income—which includes some government payments, such as unemployment compensation, Social Security benefits, and cash assistance for disabled and low-income individuals and families—exceeds a specified dollar threshold that varies by household size and composition. Households with incomes that do not exceed the threshold are considered poor.

Poverty Much Higher Under Alternative Measure. The Census Bureau’s Research Supplemental Poverty Measure (SPM) uses a relatively more comprehensive approach that (1) includes the benefits from certain major federal antipoverty programs, such as CalFresh (formerly known as food stamps) and the Earned Income Tax Credit, that are excluded when calculating the official poverty rate; (2) excludes nondiscretionary household expenses such as income taxes; and (3) adjusts poverty thresholds to reflect regional differences in the cost of living. As we have noted in previous posts, under the SPM methodology, California’s poverty rate over 2011 through 2013 was 23.4 percent, representing about 9 million people. This is much higher than the official poverty rate and the highest of any state’s SPM poverty rate, largely due to California’s high housing costs relative to the rest of the country. (We note that the SPM poverty rate is calculated using a different household survey than is used to calculate the official poverty rates referenced above. Due to a recent change in data collection practices for that survey, the Census Bureau's recent updates to poverty statistics this year did not include updated state-level SPM poverty rates.)