We discuss our overall Proposition 30 Fiscal Outlook projections in a separate blog post here. The post below provides some additional perspectives concerning Proposition 30 sales taxes and our outlook.

Proposition 30 of 2012 increased the state’s sales and use tax (SUT) and personal income tax rates. Those tax rates are scheduled to expire over a period spanning four fiscal years, starting in 2016-17.

SUT Rate Reduction in December 2016. In December 2016, the quarter-cent SUT rate created by Proposition 30 will expire. As a result, the SUT rate for the state’s General Fund—about half of California’s combined state and local SUT rate—will drop from about 4.19% to about 3.94%.

In Some Scenarios, Rate Reduction Could Lead to SUT Revenue Decline. As shown in the figure below, taxable sales sometimes decline or grow slowly from one year to the next. When taxable sales decline, SUT revenue generally declines, even if there is no change in the tax rate. However, in “slow growth” scenarios—in particular, if taxable sales growth in 2016-17 were positive but less than 3 percent—the revenue reduction from the Proposition 30 rate change would likely lead to a year-over-year decline in General Fund SUT revenue. (As shown in the figure, taxable sales growth has been between 0 percent and 3 percent in 3 out of the last 19 fiscal years.) In many of these scenarios, there could still be a year-over-year increase in overall General Fund revenue, depending on growth in other revenue sources. 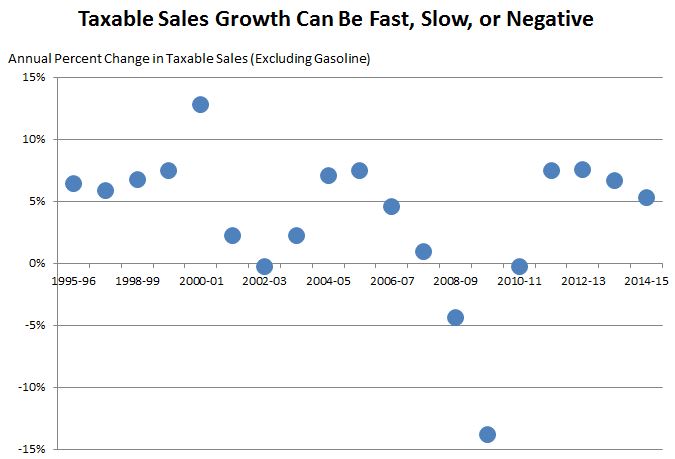