This is the second blog post in our series California’s Property Tax: Where Does Your Money Go?. Today’s post describes local governments’ organization, their services, and the proportion of statewide property tax each type of local government receives.

Counties, Cities, Schools, and Special Districts Make Up California’s Local Governments. The California Constitution divides the state into counties and establishes them as subdivisions of the state. In addition to counties, state law allows local communities to form cities, schools, and special districts. For instance, local residents can establish a new city by a vote of the residents in the area. Because communities determine the jurisdictions of these local governments, the boundaries of California counties, cities, schools, and special districts overlap in varying ways across the state.

Local Governments Provide a Wide Array of Services to Their Communities. Below we describe the kinds of services each type of local government provides.

Former Redevelopment Agencies Also Receive Property Tax Revenue. For over 60 years, California law allowed counties and cities to redirect growth from the 1 percent tax to redevelopment agencies to address urban blight. Legislation passed in 2011 dissolved these agencies. While California no longer allows this method of redevelopment, cities and counties are still paying debts related to redevelopment agency projects. Revenue from the 1 percent tax is used to pay these debts. Once the debts are paid, that property tax revenue will be distributed to cities, counties, schools, and special districts.

Schools Receive the Greatest Proportion of Property Taxes Due to Formulas From the Mid-1970s. As seen in the figure below, schools receive almost 40 percent of statewide revenue from the 1 percent tax. While this varies across the state, in many counties, schools receive between 40 and 50 percent of the property tax revenue collected in the county. The property taxes local governments received in the mid-1970s determines the proportion of property taxes they receive today.  We will discuss school funding and property taxes for other local governments further in a later post. 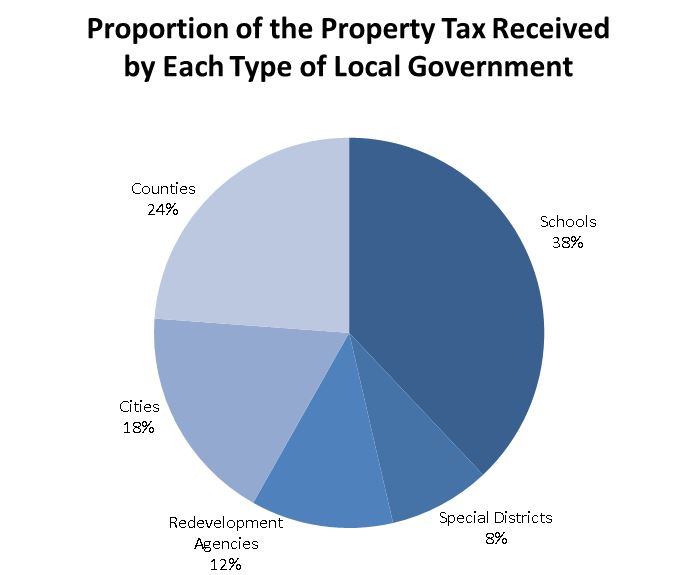