Personal and Corporate Income Taxes Combined $1.3 Billion Above Last May's Estimates. As shown below, combined personal and corporate income taxes for the 2015-16 fiscal year to date (as of December 31) are running $1.3 billion above the May Revision estimates. This is up about $600 million from last month, due largely to personal income taxes exceeding projections by $537 million during the month of December. Corporation taxes also were above projections by $61 million. December is when many high-income taxpayers make fourth-quarter estimated payments and begin to receive year-end bonus payments. Estimated payments and bonuses continue into January. Therefore, December and January--along with April and June--are the four largest income tax months of the fiscal year.

Sales tax collection data for December is not yet available. It will be available within a few days. 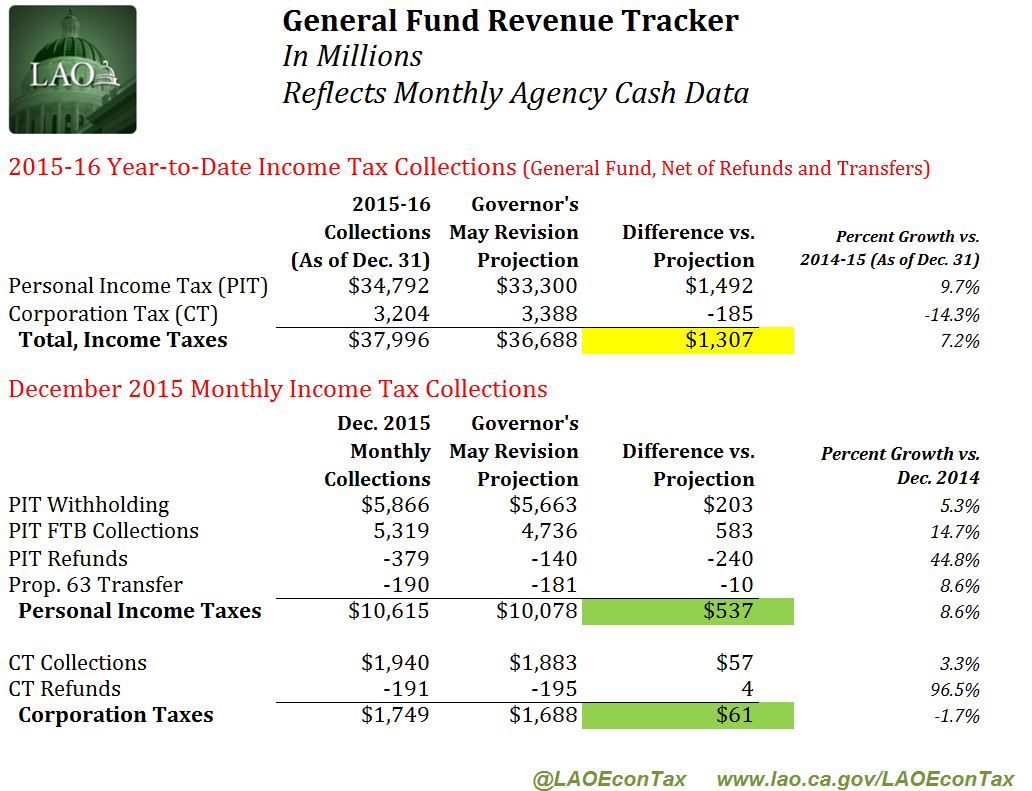 Looking Ahead... As noted above, the Governor's May Revision estimates will be replaced with updated estimates under the new budget plan the administration will release on Thursday. But, a look at the May 2015 estimates provides indications of why our office projected in November (in our Fiscal Outlook main scenario) that 2015-16 revenues would exceed those May Revision totals by $3.6 billion. While personal income tax withholding has exceeded 2014-15 levels by 7.4 percentage points for the 2015-16 fiscal year to date, the May Revision estimates assumed that withholding would exceed 2014-15 levels by only 2 percentage points over the next six months. While gross December collections at the Franchise Tax Board (largely quarterly estimated payments) were up over 14% from last December, the May Revision assumed that January 2016 estimated payments (when the remainder of 2015 estimated payments will be received) will be up just 3.7%. No one can know for sure what will happen in the stock market and other parts of the economy in the new year, but the evidence to date suggests that 2015-16 revenues will remain well above the Governor's prior projections.

This post was updated at 6:15 pm on January 6 to reflect minor updates to preliminary income tax totals.