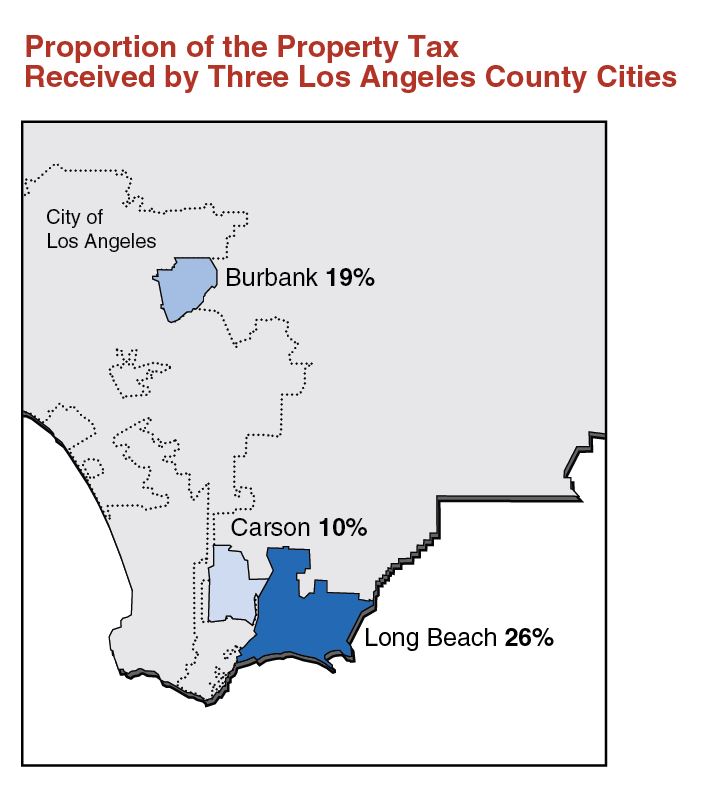 Historical Property Tax Revenue Has the Largest Impact on the Property Taxes Cities Receive Today. When the steps for distributing the 1 percent tax first were established in the late 1970s, the amount of property taxes cities received—compared to other local governments serving the same area—became the starting point for determining the amount of property tax cities would receive moving forward. In many cases, the property tax revenue a city received in the mid-1970s reflected the services the city directly provided compared to other local governments serving the same area. Often, this continues to be true today. For example, today, Long Beach receives 26 percent of the property taxes collected within its boundaries. Long Beach is a full-service city, responsible for all municipal services for its residents. In contrast, Carson, which is responsible for only some municipal services for its residents, receives only 10 percent.

“No and Low” Cities Receive Additional Property Tax Revenue From Their Counties. Carson is one of roughly 90 cities that did not receive or received very little property tax revenue in the mid-1970s. In fact, about 30 of these 90 cities (including Carson) received no property tax at all in the mid-1970s. These cities relied more heavily on other types of revenue like sales tax and business licensing fees. As a result, these cities received “no or low” proportions of the 1 percent tax when it was established in the late 1970s. In the late 1980s, the state guaranteed these “no and low” cities a minimum proportion of the property tax. To do this, the state required each county to shift a portion of its 1 percent tax revenue to any cities within the county that received less than 7 percent of the property taxes collected within the cities’ boundaries. As a result, today, these “no and low” cities receive more property tax revenue than they would have received without this state guarantee.