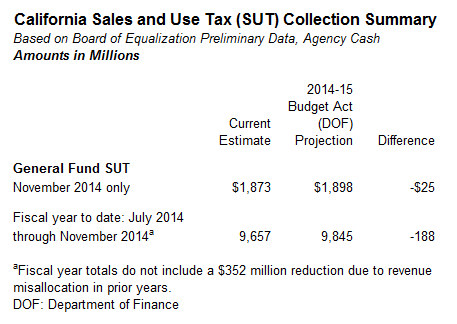 Sales Taxes Running Somewhat Below June Budget Act Projections. As shown in the figure above, November sales and use tax (SUT) collections for the state General Fund were $25 million (1.3 percent) below the administration's monthly projections that were incorporated into the 2014-15 Budget Act, as passed in June. For the fiscal year to date, General Fund SUT collections are $9.7 billion, roughly 2 percent below the administration's projections. (This total does not include the effects of a SUT cash adjustment for local governments that is expected to be attributed to prior fiscal years in the state's budgetary accounting system.)

Combined, "Big Three" General Fund Taxes Running $1.4 Billion Above Budget Act Projections. Last week, we noted that combined personal and corporate income taxes were running $1.57 billion above the administration's June budget act projections as of November 30. With the new SUT data above, the preliminary information from the tax agencies indicates that the combined Big Three General Fund taxes are running $1.4 billion above the administration's projections for 2014-15 to date. (Again, this does not include the effects of the prior-year local government SUT adjustment.) The Big Three taxes make up over 95 percent of state General Fund revenues.

Recently, we noted in our Fiscal Outlook that we projected total 2014-15 General Fund revenues to run around $2 billion above the June budget act projections, with the possibility of significantly more revenue above this projection due to recent stock market trends. Virtually all of any such revenue higher than our projection would be required to be given to schools and community colleges, we noted. In the Fiscal Outlook, we have anticipated that SUT collections for the entire 2014-15 fiscal year (ending June 30, 2015) would be about $400 million below the administration's budget act projections.

Methodology. We receive monthly revenue collection data from state tax agencies for the Big Three taxes, generally based on the "agency cash" measurement method that counts cash received and refunds disbursed in real time. ("Controller's cash," an alternative measurement method, is not as timely in some instances and, therefore, is not used by our office to track monthly state revenue collections relative to budget act projections.) Each month, preliminary compiled tax collection information comes in three "waves": (1) personal and corporate income tax information from the Franchise Tax Board early each month, (2) preliminary SUT information (like that discussed in this post) from the State Board of Equalization a few days later, and (3) overall agency cash information in the Department of Finance's monthly Finance Bulletin at mid month. We expect to release two or three blog posts in most months tied to these three waves of information; this is the second such post with information on November 2014 tax collections. Daily posts to the blog also will occur during some key revenue collection periods, including mid-April. Our posts focus on revenue collections attributed to the state's main operating account, the General Fund. For revenue tracking purposes here and in most state financial documents, the General Fund includes the Education Protection Account established by Proposition 30 in 2012.