This post discusses the near-term state General Fund revenue outlooks of both the administration and our office.

Administration and LAO Outlooks: Similar Through 2016-17 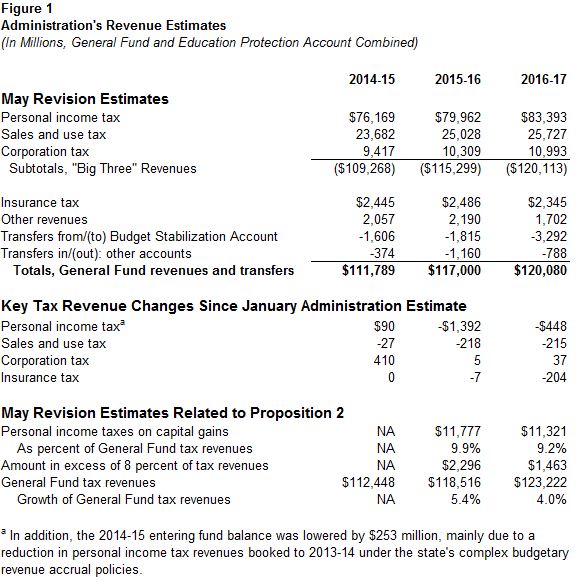 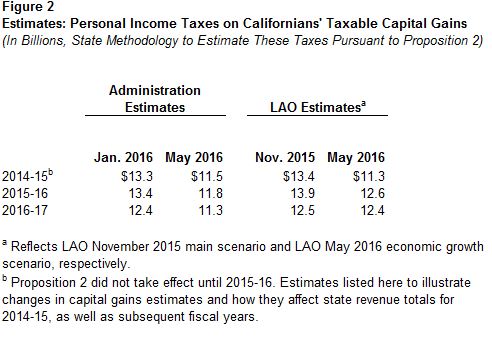 Nevertheless, Tax Revenues Still Growing. While the administration lowered its tax revenue estimates since January, the state’s overall General Fund tax revenues (administration estimates for which are listed in Figure 1) still are estimated to grow each year during the state “budget window”: up 5.4 percent in 2015-16 and another 4.0 percent in 2016-17. (Sales taxes grow at a slower rate in 2016-17 as Proposition 30 tax increases start to expire.)

The administration’s revenue estimates reflect the effects of the managed care organization (MCO) tax package passed earlier this year, which lowers insurance and corporation tax payments for some taxpayers by $300 million in 2016-17 (and higher amounts in the two fiscal years thereafter).

LAO Economic Growth Scenario: Revenues Similar to Administration Through 2016-17. As described in earlier posts, we base our May Revision budget estimates on a scenario that assumes continuing economic growth over the next several years. (This is not a prediction that such growth will occur during the entire period, as we discuss here.) Based on the assumptions in the LAO May 2016 economic growth scenario, we estimate the following:

These differences, summarized in Figure 3, are minor, given the size of the state’s $120 billion General Fund budget. 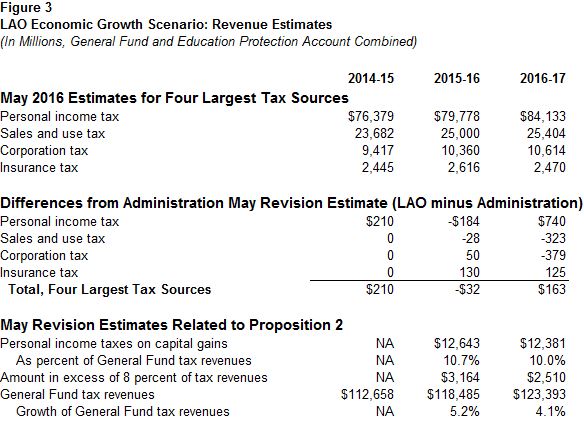 Corporate Tax Refund Uncertainties. In November and again in January, we discussed this fiscal year’s elevated level of corporation tax refunds. While corporation tax estimates have changed somewhat since January, both our office and the administration continue to assume that there will be an elevated level of refunds in May and/or June 2016. Based on guidance from tax agency staff, we believe this is a reasonable assumption, but neither the timing nor the amount of the refunds reflected in our estimates is certain. If the assumed level of corporate tax refunds this month and next month do not materialize—or they materialize after June 30—revenues booked to 2014-15 and 2015-16 could change by hundreds of millions of dollars. (Please see our prior analyses for more information.)

2016-17 Budget Act Estimates. Under the Constitution, the Legislature must include an estimate of available General Fund resources—principally 2016-17 tax revenues—in the annual budget act it passes next month. As we have noted, no one can predict the course of the economy or the stock market (and volatile capital gains) with precision. By one year from now, revenue estimates will be different from what they are now—up or down by perhaps hundreds of millions or even a few billion dollars. That being said, given that the administration’s May Revision estimate of total General Fund revenues and our revenue estimate are so similar, we believe that either would be a reasonable estimate to include in the 2016-17 budget act.

More to Come: Later This Week. Later this week, we expect to release a summary of our combined multiyear revenue and expenditure estimates, illustrating the overall condition of the General Fund—including required Proposition 2 reserves—if the Legislature were to use our revenue, property tax, and other estimates.