The administration released its "multi-year forecast" estimates of General Fund revenues on May 13 as part of the 2016 May Revision. Below, we compare the administration's multi-year General Fund revenue figures through 2019-20 with our office's new figures, which assume economic and stock market growth during the period. It is crucial to understand that our office's use of an economic growth scenario in developing multi-year revenue estimates is not a prediction that such economic growth will continue for the duration of this four-year period. (At some points in the period, growth almost certainly will be noticeably faster or slower than we now assume.)

Yesterday, we released information concerning our near-term state revenue outlook (through 2016-17). The figures below consider General Fund revenues and transfers except for required transfers to the Proposition 2 Budget Stabilization Account, which is also known as the rainy day fund. (Our office is still developing our estimates of those rainy day fund transfers under the LAO economic growth scenario.) Nevertheless, the figures below show that, under the economic growth scenario assumptions we are now using, we estimate the General Fund would take in billions of dollars more in tax revenue than the administration now estimates in 2017-18, 2018-19, and 2019-20. 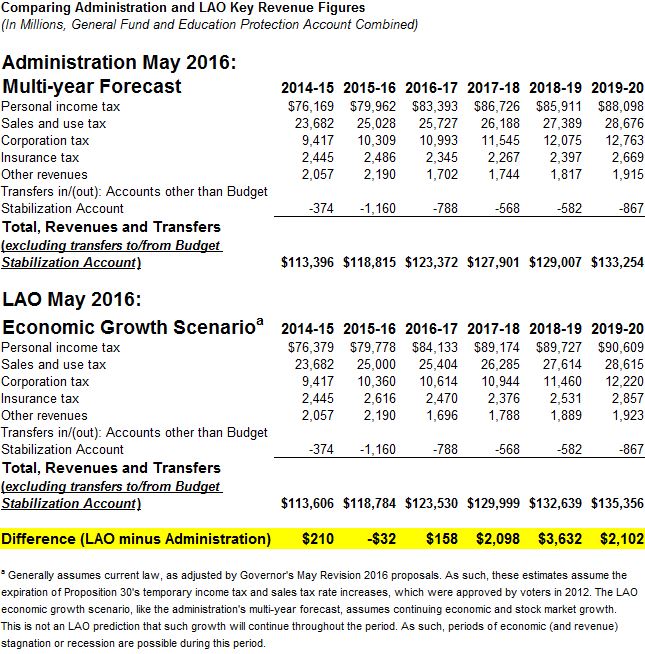 Under Economic Growth Scenario Assumptions, LAO Revenues $2 Billion or More Higher in 2017-18, 2018-19, and 2019-20. The figure above shows that the LAO's scenario estimates of key tax revenues are, on net, higher by $2 billion or more in 2017-18, 2018-19, and 2019-20 (as we mentioned briefly yesterday in discussing the near-term revenue outlook, in which our revenue estimates are much closer to the administration's). Under the LAO economic growth scenario assumption, higher personal income taxes (PIT) on capital gains would make up between 40 percent and 70 percent of the difference (depending on the year) between the LAO and administration PIT estimates in 2017-18, 2018-19, and 2019-20. There are various other estimating differences in those fiscal years. As noted previously, for example, the LAO economic growth scenario also assumes faster economic and wage growth during some parts of this outyear period.

Assumptions Concerning Minimum Wage and Proposition 30 Expiration. As we discussed on Sunday, both administration and LAO estimates make some initial assumptions about the effect of the minimum wage increase proposal on the economy. (In our case, we view our assumptions in this regard as very rough, and they will evolve over time.)

Both the administration and LAO revenue figures above assume the expiration of Proposition 30's temporary PIT and sales tax rate increases over the next few years. The most notable impact of that assumption is the slow to negative growth of PIT estimated above in 2018-19. (In the administration's figures, for example, Proposition 30 PIT revenue drops from $7.0 billion in 2017-18 to $2.8 billion in 2018-19 and $0 in 2019-20.) Nevertheless, under both sets of estimates above, the listed General Fund revenues, collectively, grow each fiscal year at varying growth rates. As noted above, this all assumes continued growth of the economy and stock prices over the period.

More Information on Multiyear Budget Situation Later This Week. The post above concerns only revenues. We are still working on our estimates of Budget Stabilization Account transfers and expenditures. As such, we expect to release some summary information about the possible "bottom line" condition of the General Fund over the multiyear period later this week.