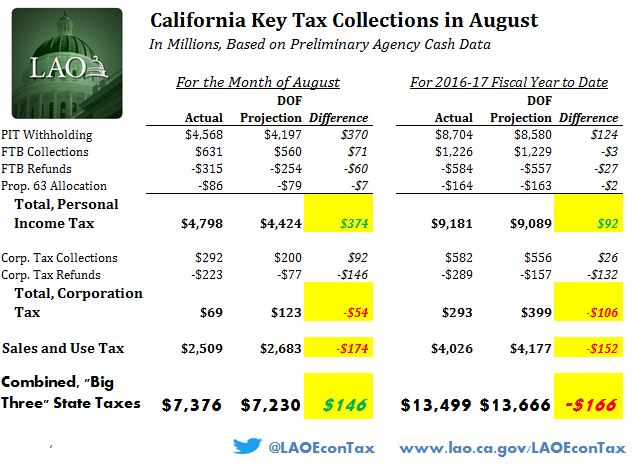 August is a minor state revenue collection month. Personal income taxes were well above 2016-17 budget projections, largely, it appears, due to collections that essentially had been expected to come in during the month of July. (This sort of "timing-related" disparity in monthly collections is common.) Corporation tax refunds continued to flow from state coffers at a fast pace exceeding projections. Sales taxes in August were a disappointing 6.5% below expectations.

For the 2016-17 fiscal year to date, combined collections of the key General Fund taxes are running close to budget projections, with weakness in sales and corporation taxes slightly more significant than the strength in the personal income tax. On net, collections of the major taxes shown above are $166 million below budget projections, based on the preliminary August data. (As of the end of July, the monthly Department of Finance Finance Bulletin showed that insurance taxes and other minor revenues were essentially on target in 2016-17. August tallies for these minor revenues will be available when the new Finance Bulletin is published here in a few days.)

The key recent concern for state revenues was the weak performance in June for quarterly estimated personal income tax payments, which were down 8.1% compared to the prior June. This weakness suggested that the stock market turmoil of earlier this year was softening state tax collections. This week brings another set of quarterly estimated payments by some high-income taxpayers. Budget projections anticipate 2.5% growth, compared to last September, in this month's gross personal income tax collections by FTB. We may not have a good handle on the income tax trend this month until later next week.

Our office's next state revenue projections are expected to be released in November.