We now have preliminary information from the state's tax agencies on November 2016 state tax collections--specifically, the state's "Big Three" General Fund taxes: the personal income tax (PIT), the corporation tax (CT), and the sales and use tax (SUT). 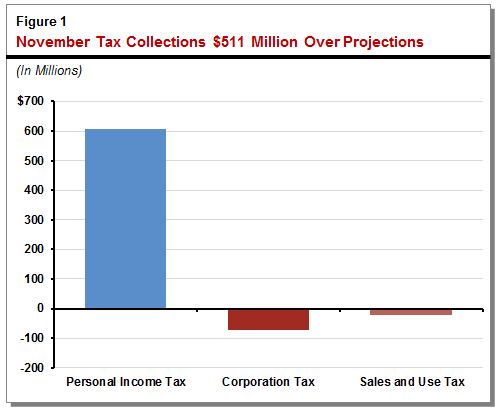 November Personal Income Tax Collections Exceed Projections. November is a minor revenue month. As shown in Figure 1 above, personal income tax (PIT) collections came in at $608 million above the administration’s projections that were incorporated into the June 2016 budget plan. The positive PIT results resulted mainly from healthy withholding levels—amounts paid from employees’ paychecks. Specifically, PIT withholding came in at $4.5 billion, beating administration projections by $502 million, or over 12%. Through the first five months of 2016-17, withholding has exceeded administration projections by $573 million, or about 3%.

Corporation Tax Receipts Dragged Down By Elevated Refunds. Gross corporation tax (CT) collections totaled $283 million in November, exceeding administration projections by $42 million. This positive outcome, however, was more than offset by a continuing trend of elevated refunds. Specifically, refunds totaled $405 million, $116 worse than budget act assumptions. These larger refunds could reflect an ongoing change in taxpayer behavior. It is, however, possible that they reflect operational changes at the Franchise Tax Board and, if so, CT refunds may revert to levels that are more typical in the next calendar year. So far this fiscal year, CT refunds are running 40 percent higher than administration projections. In total, net November CT receipts were $74 million under administration projections.

Sales Tax Collections Just Shy of Target. Preliminary November SUT collections were $23 million (about 1%) below budget projections. These results continue a trend of SUT receipts falling short of projections, although results in recent months had been weaker. 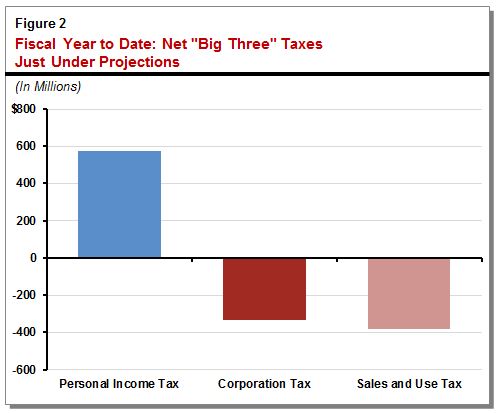 Fiscal Year to Date, Big Three Revenues Just Under Projections. Through the first five months of 2016-17, collections of the state's three largest General Fund revenue sources have fallen short of budget act projections by $141 million, or less than 1 percent. This is the net result of PIT revenues exceeding projections by $574 million (2%), sales tax revenues coming in $384 million (4%) below projections, and CT revenues falling short of projections by $331 million (19%). The table at the bottom of this post provides more detail about the November revenue results.

December, January, and April Are the Months to Watch. As described in our November 2016 Fiscal Outlook report, we have estimated that taxpayers will make larger estimated and final payments for the rest of the year and that 2016-17 PIT revenues will exceed budget act projections by $1.7 billion. (We also estimated that sales and corporation taxes will fall short of budget projections by a combined $2.1 billion in 2016-17, with additional revenue shortfalls attributable to the prior fiscal year as well.)

Large amounts of 2016 PIT collections will be recorded in late December, early-to-mid January, and April, which may prove or disprove the theory behind our estimates in the Fiscal Outlook report. Our Fiscal Outlook estimates were developed before the election. Following the election, speculation has increased that Congress and the new President will agree to significant federal tax legislation in 2017. Anticipation of such legislation often leads to significant changes in taxpayer behavior (for example, delaying realization of some capital gains), which could affect state revenue trends negatively or positively in the coming months before the May Revision. (In advance of the Governor’s budget proposal in January, the administration generally must finish most of its key budget calculations in December. This timeline means that its January revenue estimates generally cannot account for late December and early January PIT collections. Both the administration and our office typically release updated revenue projections in May.) 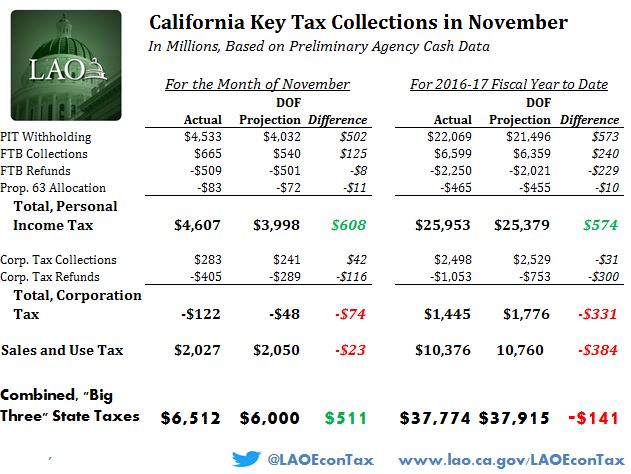