Low-Wage Workers. In this post, we provide information on how many workers will be affected directly by the fully implemented $15 per hour minimum wage in each region of the state. Wages tend to grow over time, so we estimate that the $15 per hour minimum wage will directly affect the part of the workforce currently making less than $12.50 per hour. 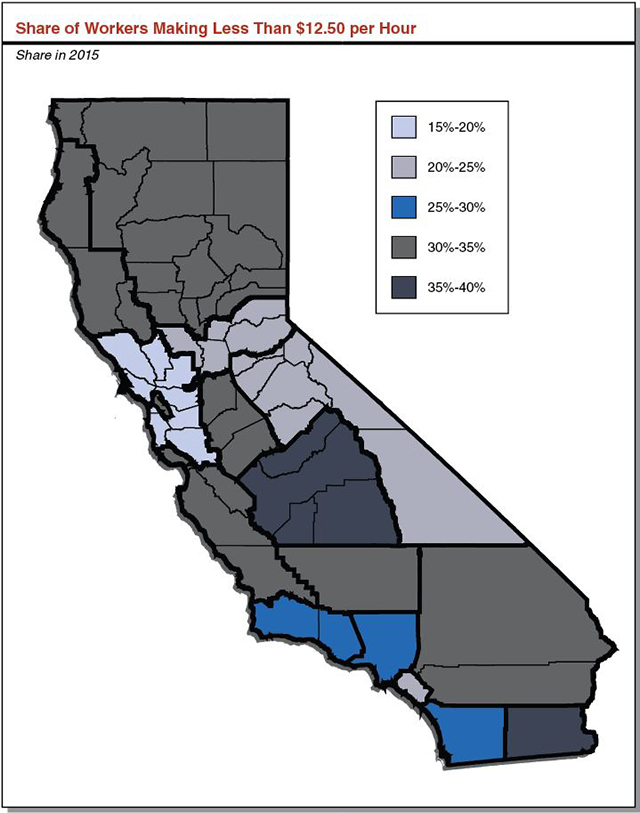 Local Minimum Wages. Some of California’s local governments have passed minimum wages that will exceed the fully implemented statewide minimum wage. These local governments are concentrated within two regions: the Bay Area and Los Angeles County. As a result, the affected population in these two regions likely will be somewhat smaller than indicated in the figure.

Data Source: 2015 American Community Survey (ACS). The ACS is an annual household survey conducted by the Census Bureau that covers basic economic and demographic information. The ACS’s large sample sizes and level of geographic detail make it useful for regional analyses. As described in our next post, however, it is not the best data source for statewide analyses of low-wage workers. ACS respondents do not report hourly wages directly, so we estimate their hourly wages using their reported earnings and work schedules. (We downloaded the 2015 ACS data from IPUMS-USA, University of Minnesota, www.ipums.org.)