December "Big Three" Tax Collections Disappointing…But Year-End Payments Still Coming In. Figure 1 below shows preliminary December revenue results for the state General Fund's three main taxes—the personal income tax (PIT), the corporation tax (CT), and the sales and use tax (SUT). As shown in the figure, December tax collections from these sources came in $1.3 billion below administration projections that were incorporated into the June 2016 budget plan. The shortfall was almost entirely due to worse-than-projected PIT results. 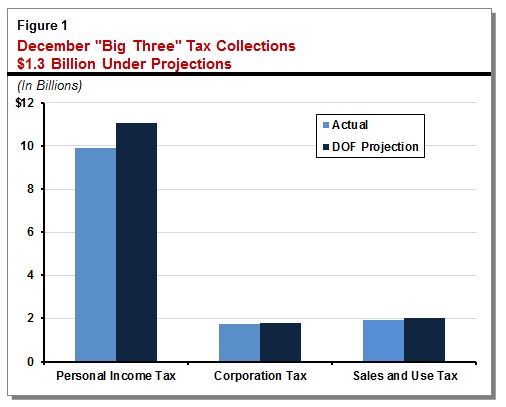 Early January Collections Are Promising. While the December results were disappointing, it is important to note that high-income earners’ year-end tax payments typically are spread across the period between late December and mid-January, such that payments this month potentially could make up for some of the bad news last month. In fact, PIT withholding through January 9th is strong, on track to perhaps well exceed estimates included in the June 2016 state budget act.

Through First Half of 2016-17, Preliminary Big Three Tax Receipts $1.4 Billion Under Projections. As we covered in our November revenue tracking post, through the first five months of 2016-17 combined the state's three key taxes were running about $140 million below budget act projections. Combined with December’s $1.3 billion shortfall, these revenues through the first half of the fiscal year are now running $1.4 billion under budget projections, as shown in Figure 2. The table at the bottom of this post provides more detail about the December revenue results. (Our office's most recent state revenue outlook in November estimated that SUT and CT would be below projections in 2016-17, but not PIT.) 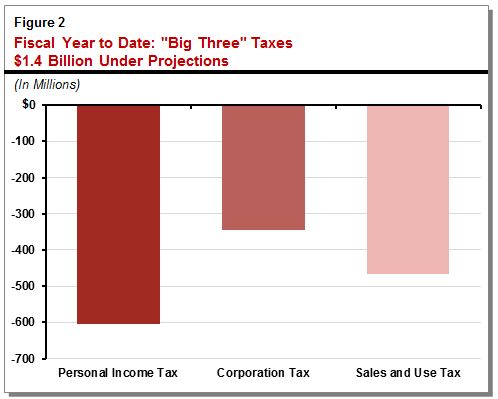 Federal Uncertainty Means Revenue Picture Murky Until At Least April. As we discussed in last month’s post, taxpayers’ behavior is already changing due to anticipation of potential federal tax changes. For example, some taxpayers are likely deferring capital gains and other income realizations into calendar year 2017 on the assumption that the new Congress and the President-elect may reach an agreement to reduce federal capital gains and other tax rates. The strong PIT withholding trends in January could be early evidence that this is the case. Some such changes in taxpayers’ behavior could delay tax payments that would otherwise have been expected in December 2016 and January 2017 to April 2017 and thereafter. In addition, certain corporate tax (“repatriation”) changes under consideration could result in a future one-time state revenue increase potentially totaling in the low hundreds of millions of dollars.

Due to uncertainty surrounding federal tax policy, it may be at least April 2017 before we receive information that can begin to illuminate the extent of these effects. Because of this federal policy uncertainty, there may be more significant near-term revenue estimate changes than usual between now and May. This means that the May Revision could be more important than usual in determining the amount of revenues available to the Legislature in next year’s budget.

Additional detail on the preliminary collections data is below. 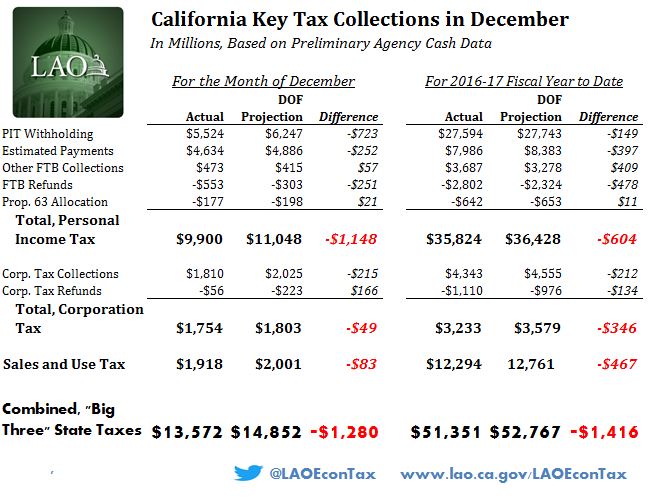