We now have preliminary data concerning personal income tax (PIT), corporation tax (CT), and sales and use tax (SUT) collections for January 2017. These are California's "Big Three" General Fund taxes: generating almost all of that fund's revenues. The preliminary January data is subject to change.

Big Three General Fund Taxes $705 Million Above January Projections. Figure 1 summarizes January income tax receipts based on preliminary tax agency cash reports. As shown in the figure, state income taxes came in $684 million above the administration’s new projections. This positive result was the combination of $497 million from the PIT and $187 million from the CT. In addition to the income taxes shown in Figure 1, SUT also was above January projections, but only by a small amount ($21 million). Below, we walk through some of our key perspectives on January revenue collections. (The table at the end of this post provides detail on the January revenue results.) 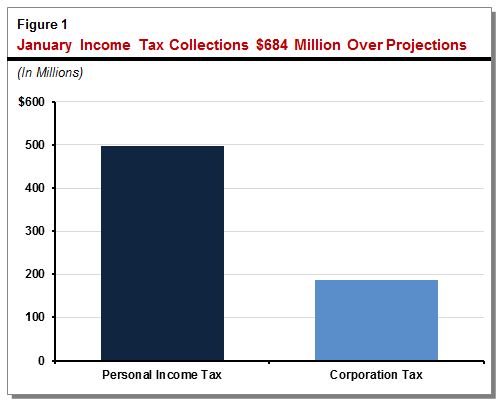 Strong Results from PIT Estimated Payments. Estimated payments make January an important revenue month. (Estimated payments are quarterly payments made by individuals and businesses on expected taxable income for which there is no withholding, such as realized capital gains on sales of stocks and other assets.) January 2017 estimated payments beat administration projections by $664 million, or 13 percent.

Changes in Monthly Calendar Makes Year-Over-Year Withholding Comparisons Challenging. Each year, months start on different days. This is important for revenue collections because the starting day of the month can change the number of Employment Development Department (EDD) processing weekdays in that month. For example, the EDD collected withholding on 20 days in January 2017 compared with 19 days in January 2016. The variation in collection days makes year-over-year comparisons in withholding challenging.

The administration’s new monthly projections revised their expectations for January 2017 CT collections downward by $75 million. January 2017 CT receipts beat these new projections by $187 million. The result was the combination of collections exceeding projections by $131 million and refunds coming in $57 million less than the administration expected. As we discussed in our November revenue tracking post, it is possible that changes in Franchise Tax Board processing may have accelerated some refunds from the second half of 2016-17 to the first half.

Sales and Use Tax

The sales tax was just above the administration's new projections for the month: $2.79 billion, versus the $2.77 billion projected. 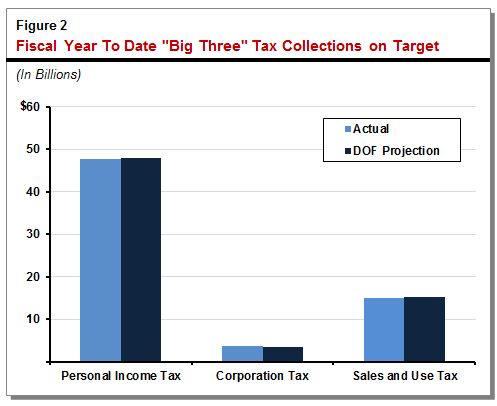 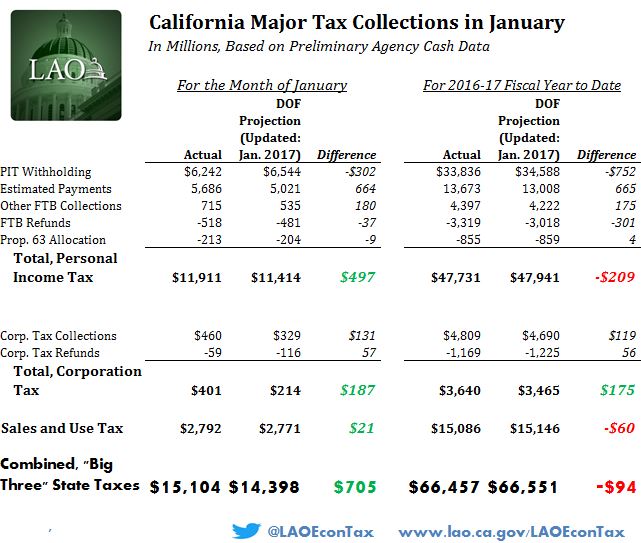 For information on other January General Fund revenue collections, see the Department of Finance's Finance Bulletin, which was posted here on February 16, 2017.