February is a minor revenue month. The state's three major General Fund taxes all fell short of projections, especially the sales tax, which came in $166 million below the administration's projections (which were updated and revised in January 2017 based on the Governor's 2017-18 budget estimates). 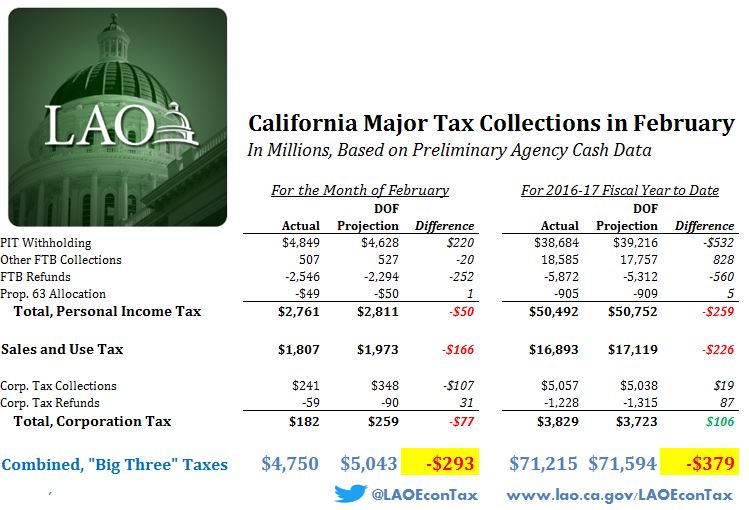 The sales tax shortfall may reflect some one-time issues related to the timing of revenue receipts, but nevertheless, this was a disappointing monthly result. For the 2017-18 fiscal year to date, sales taxes are running $226 million (1.3%) below the administration's projections.

Preliminary collection totals for the state’s two income taxes fell $153 million short of the administration’s projections, as shown in the table above. This result was the combination of several factors. For example, personal income tax withholding exceeded projections by $220 million, but this positive result was more than offset by refunds that were $255 million higher than projected (higher refunds mean lower net state tax receipts). During the personal income tax refund season, it is difficult to project the pace of refunds, which can vary from year to year. Higher refunds in one month can sometimes be offset by lower refunds later. For the fiscal year to date, collections from the two income taxes are about three-tenths of 1 percent under the administration’s projections.

New revenue estimates will be released in May.