Notably, the withholding component of PIT (primarily related to wage and salary income) was $75 million above projections -- up 8% from the amount booked in September 2016, despite the fact that September had one less business day this year. This healthy growth in withholding does not square well with the slow growth in recent monthly jobs reports. Future upward revisions of recent jobs data, therefore, seem quite possible.

PIT withholding revenues may continue to exceed projections, as the Department of Finance (budget act) projections for the rest of 2017-18 anticipate even less year-over-year withholding growth in the months ahead. Moreover, the possibility remains that there will be a surge in high-income taxpayers realizing capital gains or other income in the months ahead in conjunction with possible legislation to reduce certain federal taxes. 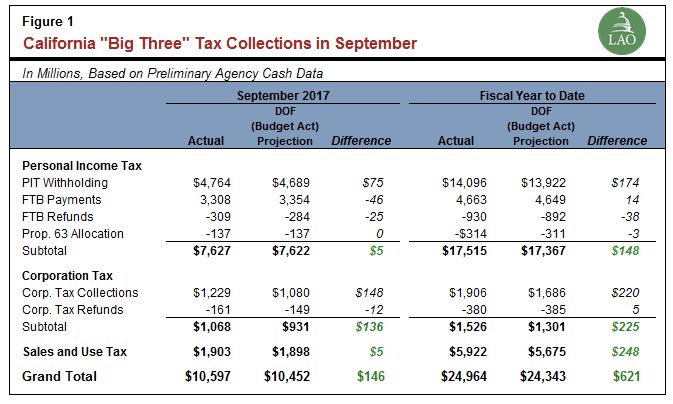 The figures in the table above reflect small revisions received from tax agencies after publication of the Department of Finance's Finance Bulletin for this month. The Finance Bulletin also includes information on insurance tax and other General Fund revenue collections for 2017-18 to date.

We expect to update our outlook for state General Fund revenues and spending in our annual Fiscal Outlook publication in mid-November. The administration will update its projections in conjunction with the release of the Governor's 2018-19 budget proposal in January.