October is a relatively minor revenue month for the state. As shown in the table below, preliminary collections from the two income taxes fell short of projections by $167 million (2.9%). In particular, better than expected personal income tax (PIT) withholding was offset by higher PIT refunds and lower corporation tax collections. The shortfall in income tax collections, in turn, was almost offset by positive sales and use tax (SUT) receipts, which came in $122 million (5.4%) above budget projections. Through the first four months of 2017-18, the state's three major taxes are running $576 million (1.8%) above budget assumptions, mostly due to strong SUT collections in recent months. 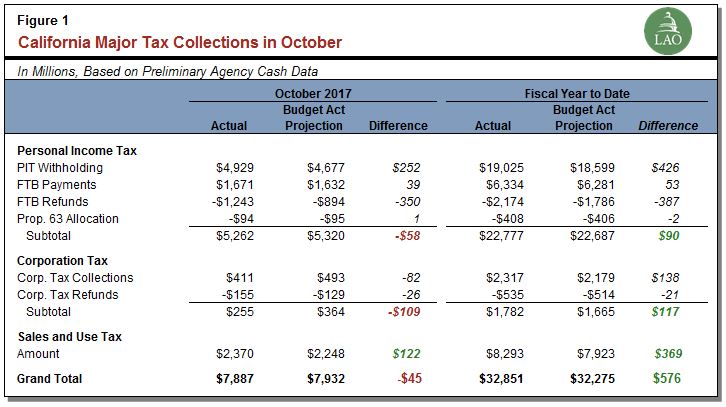 Continued Strength in PIT Withholding. Monthly revenue projections incorporated into the June 2017 budget assume that withholding in 2017-18 will increase 4.2% over the 2016-17 level. Through the first four months of 2017-18, withholding is running 8.5% over the same period in 2016-17. In order for withholding to meet budget act projections, collections for the remainder of the fiscal year would only have to exceed the 2016-17 level by 2.4%. It therefore seems to us there is considerable upside on withholding collections relative to budget assumptions.

October Refunds Dampen Withholding Strength. Some PIT taxpayers submit their tax liability payments in April but do not file their return with FTB until October. Some of these taxpayers may receive a refund in October if their final tax liability is lower than the preliminary liability on which their April payment was premised. In 8 of the last 9 years, these refunds have totaled between $600 million and $900 million. Preliminary data suggest October refunds were much higher than in recent years. Specifically, refunds totaled $1.2 billion, nearly 40% over the budget act assumption. This result more than offset the better than expected withholding collections in October 2017.

Our office releases its annual Fiscal Outlook, with updated state revenue and expenditure projections, each year on or about November 15. The administration will release updated estimates with the Governor's 2018-19 budget proposal in January.