November is a relatively minor revenue month for the state. As shown in the table below, collections from the state’s three main taxes came in $46 million below the June 2017 budget projection. Positive corporation tax (CT) results were more than offset by personal income tax (PIT) and sales and use tax (SUT) collections coming in below projections. Through the first five months of 2017-18, collections from these three taxes are running $542 million (1.4%) above projections due to superior CT and SUT receipts. 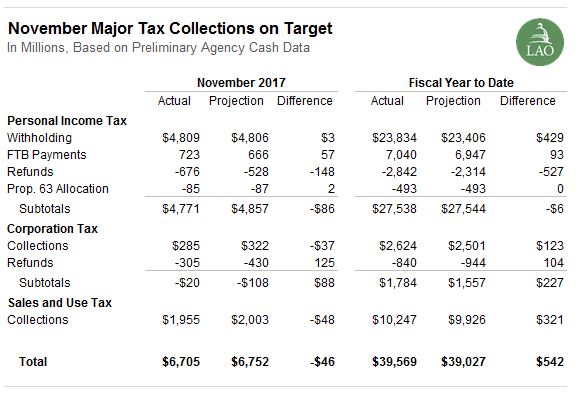 As we described in November, we estimate that PIT revenues will exceed budget projections in 2017-18. These estimates are premised on a surge in capital gains revenues that we think will show up in December 2017, January 2018, and/or April 2018. We should have a better sense of the capital gains situation by the end of January 2018.