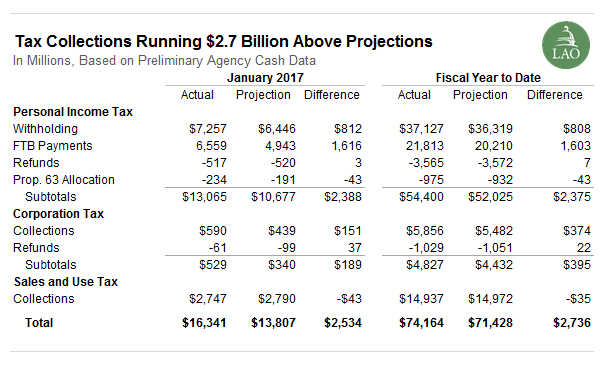 Through January, Year-to-Date Collections $2.7 Billion Above Projections. As shown in the table above, receipts from the state’s three main taxes currently are running $2.7 billion ahead of the administration’s new projections through the first seven months of 2017-18. Most of this strength is from the PIT, but the CT also is notably above projections.

April 2018 Is Key Month to Watch. Our assessment continues to be that General Fund revenues for 2017-18 and 2018-19 combined likely will exceed the administration’s January 2018 estimates. Recent changes in federal tax law, however, create a murky revenue picture for at least the next several months. To some extent, the positive revenue results in December 2017 and January 2018 may reflect taxpayers shifting income tax payments from April 2018 to December 2017 in order to increase state tax deductions on their 2017 federal tax returns. In April 2018, we may have a rough sense of the degree to which the recent revenue surge was merely timing—meaning that we would have received December 2017 and January 2018 revenue in April 2018 anyway—versus ongoing revenue growth. However, it will be until at least April 2019 before we have enough data to reach conclusions about the effects of the recent federal legislation.

Recent Corporation Tax Surge Mostly One-Time. In December 2017, CT collections surged past the administration’s old monthly projection by about 40 percent. Based on subsequent information from the Franchise Tax Board, it appears that about $750 million was due to the resolution of several multi-year taxpayer audits. As these are one-time payments, CT receipts for the rest of the fiscal year should be more in line with the administration’s projections.