Last year, we wrote about industry wage growth in California between 1990 and 2016. This post examines the change in median wages from 2016 to 2017 for 21 of the 22 broad occupation groups. Any industry will have workers in a number of different occupations, and the workers in any occupation will be spread among a number of different industries. For example, a security guard at a bank would have the same occupation as a security guard at a school although they work in different industries. (We excluded the personal care and services group from this analysis. From the 2016 survey to the 2017 survey, nearly 400,000 previously unclassified employees were reclassified as personal care aides, causing the group to nearly double in size and making comparisons between 2016 and 2017 misleading.) The recently released EDD data can be found here.

Minimum Wage Likely Boosted Pay in Lowest Paying Occupations. As seen below, the six lowest-paying occupation groups had the six highest median wage growth rates (shaded in grey). The three groups clustered around 5.5 percent are building maintenance, sales (including most retail workers), and farming/fishing/forestry. Food preparation and service wages grew by 3.5 percent. Workers in production and in transportation/material moving both saw wage growth of 3.8 percent. 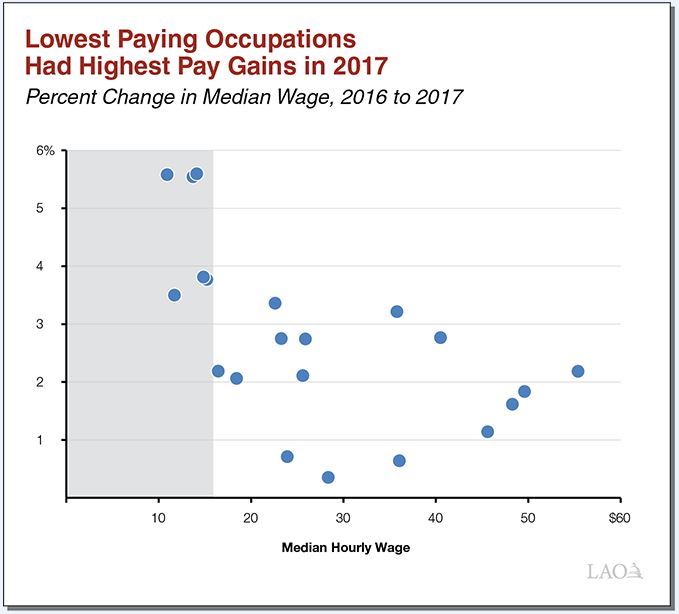 No Clear Trend Among Higher-Wage Occupations. Among higher-wage occupations, there was less of a pattern. Protective services (a middle-wage group) and natural/social science (a high-wage group) saw growth over 3 percent. Community/social services and arts/entertainment/sports/media (both middle-wage) and business/financial operations (high-wage) had wage growth below 1 percent.