Our recent post examined the trend in California wage growth for different occupation groups (where workers are grouped by the sort of work they do as opposed to their employers’ primary line of business) from 2016 to 2017, and noted the potential effect of the increase in the state’s minimum wage. This post takes a longer view and examines the trend in occupational wages starting in 2013, just before the minimum wage was raised from $8 to $9 an hour, the first increase since 2008.

The figure below shows the average annual change from 2013 to 2017 in the median wage for the 22 broad occupational groups recognized by the state. (For the personal care and services group, we show the average change from 2013 to 2016. From the 2016 survey to the 2017 survey, nearly 400,000 previously unclassified employees were reclassified as personal care aides, causing the group to nearly double in size and making comparisons between 2016 and 2017 misleading.) The four-year results are similar to the one-year results described in our last post in that the lowest-paying occupation groups generally saw the biggest wage growth (shaded in grey). The biggest gains (more than 6 percent on average) went to the two lowest-paying groups, food preparation/service, and farming/fishing/forestry. The eight lowest paying groups all had annual growth of 2 percent or better compared to just two of the 14 higher paying groups. 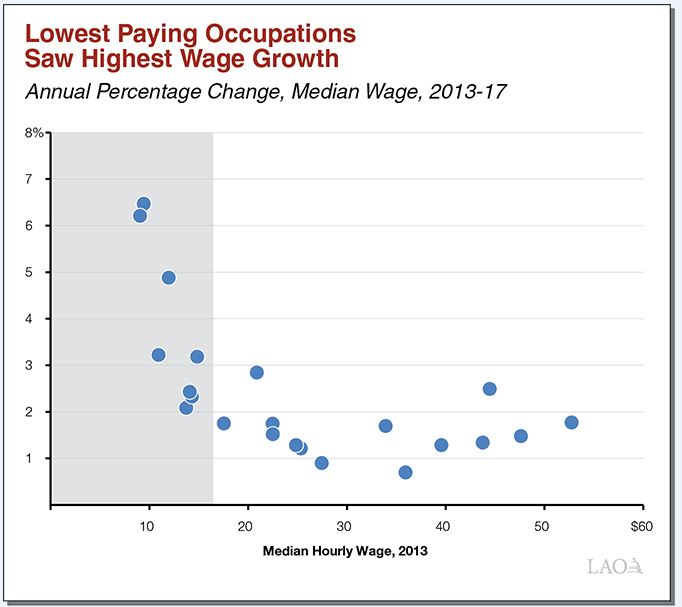 The figure below compares the state’s minimum wage to median wages for food service, building maintenance, and farming/fishing/forestry. All three of these wage groups saw greater than 4 percent annual growth from 2013 to 2017. 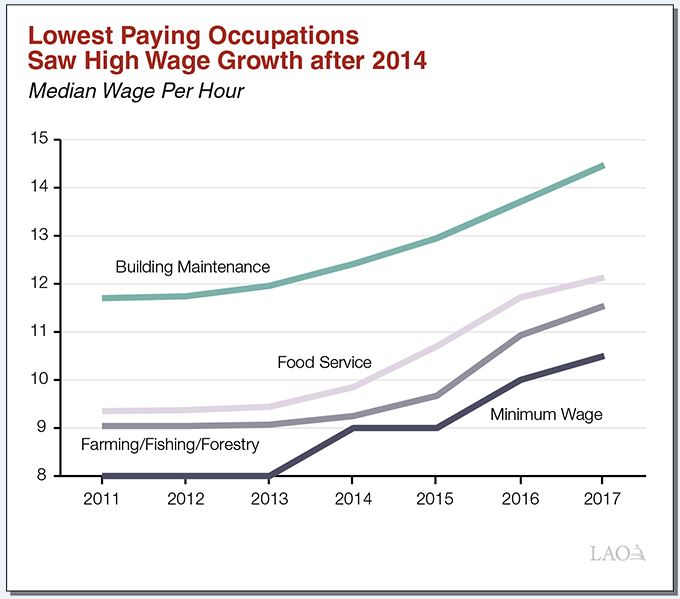 As seen in the figure, median wages in all three of these groups track changes in the state’s minimum wage fairly well though employers did not respond to the first minimum wage increase immediately. Interestingly, building maintenance—with a median wage consistently $3 per hour above the minimum wage—showed the same growth pattern as the two lower-paying groups did. This suggests that the minimum wage increases led to pay increases higher up the wage scale. Employers often have to compete for available workers, and as minimum wage jobs become more attractive, employers seeking to fill slightly better-paying positions might have to boost the pay of these positions to attract the workers they need.